Thank you for the kind invitation to join you today and please allow me to acknowledge and to thank the Government of Gabon for hosting this 49th session of the International Tropical Timber Council (ITTC).

Being here in the beautiful country of Gabon, I would also like to respectfully recognize the President of Gabon, Mr Ali Bongo Ondimba, for his strong personal commitment to seriously addressing wildlife conservation issues, and most particularly his efforts to curb the poaching of the African elephant - not only here in Gabon but across the African continent. 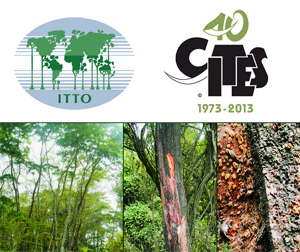 "The CoP to CITES, in common with many UN institutions and
other entities, regularly calls for increased synergy and
collaboration between intergovernmental organizations. There
are few better examples of successful collaboration that leads to
such tangible results in the field than the one between our two
organizations", John E. Scanlon

Distinguished delegates, on the 3rd of March this year, CITES celebrated its 40th anniversary, the Convention text having been adopted in Washington D.C. in 1973. Its continuing importance was recognized by Heads of State and governments in 2012 at the UN Conference on Sustainable Development, also known as Rio+20, where CITES was described as an international agreement that stands at the intersection between trade, the environment and development.

CITES is both a conservation and a trade-related Convention. However, it neither promotes nor discourages trade, rather it regulates trade when it does take place to ensure it is legal, sustainable and traceable.

Countries have sovereign rights over their own biological resources and the decision on whether or not to trade is one for them to take - subject to meeting their international commitments.

When a Party to CITES decides to trade in CITES-listed wildlife, the Convention provides the global mechanisms to ensure that such trade is not detrimental to the survival of the species in the wild. In doing so, it places obligations on source, transit and destination States – reflecting the fact that effectively implementing CITES requires a collective effort.

Distinguished delegates, CITES currently regulates international trade in about 35,000 species of wild plants and animals, and their derivatives.

Of the CITES-listed species 3% are threatened with extinction and they are found on Appendix I of the Convention. Commercial trade in these species is generally prohibited, such as for most elephants and rhinos, as well as tigers and great apes and certain timber species, such as Brazilian Rosewood (Dalbergia nigra) and marine life.

The vast majority of species, or approximately 96%, are found on Appendix II of the Convention. They are not necessarily threatened with extinction but they could become so if international trade is not strictly regulated, with close to one million legal trade transactions occurring every year.

We have seen a major development in the use of the Convention over recent years, with Parties deciding to include many commercially valuable tree species under CITES regulatory controls. Just 18 tree species were listed in the CITES Appendices in 1975. Today more than 400 tree species are listed under CITES with the 16th meeting of the Conference of the Parties to CITES (CoP16), held in Bangkok earlier this year, bringing almost 300 new timber species under Appendix II of CITES.

The decisions taken at CoP16 to bring so many new tree species under CITES, which were all taken by consensus, reflect the growing confidence that Parties have in CITES in helping them manage these valuable resources more sustainably and the will to ensure the legality of timbers in trade. The success of the ITTO-CITES programme had a lot to do with this increased confidence in CITES.

Distinguished delegates, although CITES is a species Convention, its implementation also brings benefits to local people, national economies, and entire ecosystems. The benefits of well-regulated trade for local and indigenous communities can be significant.

The legal trade in CITES species generates billions of dollars each year. By way of example, Madagascar rosewood logs can sell for USD 5,000 per m3 which is double the price of mahogany and over 10 times the price of temperate hardwood; USD 1 billion is generated annually at the upper end of the value chain for trade in just five CITES-listed pythons, and one litre of Aquilaria crassna, an oil derived from agarwood, is valued at USD 80,000.

Combatting illegal trade also has great benefits for people, such as through protecting tourism assets and ecosystems and the vital services they provide. By way of example, wildlife based tourism in Africa brings significant benefits for some national economies and is a major generator of local jobs and foreign exchange.

Distinguished delegates, we face many challenges in meeting our objectives but new and exciting opportunities are emerging to use technology to help meet these challenges. We are actively promoting the further development and use of modern technologies to more effectively intercept illegal trade and facilitate legal and sustainable trade, including through our collaborative efforts with the ITTO, UNCTAD, the World Customs Organization and the World Economic Forum.

Turning to our joint programme, there are today a total of 24 ITTO-CITES projects in 11 countries across four continents – Africa, Asia, Latin America and Europe – that are either underway, or soon will be (10 activities in five African countries, eight in two Asian countries, five in three Latin American countries and one in a European country). These projects are benefiting wildlife and people and are contributing towards sustainable livelihoods.

As the Scientific Authority of Cameroon explained during a previous ITTO-CITES side event, "Thanks to this programme now the forest communities in Cameroon that harvest and trade dry bark of Prunus africana, take care of their forest. Before the programme they used to chop down the trees in order to extract the bark, now, they harvest these trees in a sustainable way and they protect the forest because they know how valuable it is for them and for their future generations."

The impact of this programme has however also extended beyond the participating ITTO member countries. For example, the experience gained in Cameroon with the African cherry tree led to the regional coordinator for Africa being deployed to build capacities and train the CITES Scientific Authority in Burundi, which was fully funded by the CITES Secretariat.

This in turn has led to Burundi now actively organizing its request to become an ITTO Member.

ITTO and CITES have priorities and these are not always exactly the same. In this joint programme both entities support each other to complement and to meet their respective objectives. This is one of the great strengths of this partnership and we hope that it remains so.

A strategic plan for our joint programme is essential, but the example shared above also illustrates the value of allowing some scope for adapting priorities during the implementation of the work programme.

Our joint programme has produced three videos to more graphically show you the great progress that has been made in three of the participating countries. Thanks to the regional coordinators and the national authorities videos are available on: the management of the African cherry tree from Cameroon; the work on inventories and quota setting for mahogany from Peru, and the harvest management techniques that Indonesia uses for ramin species. A fourth condensed video highlighting all three of them has also been produced. In a few moments we will show the video the African cherry tree from Cameroon to give you a sense of what we is being done in the field.

Demand for participating in this ITTO-CITES programme keeps increasing and we express our deep gratitude to the donors to the programme, especially the generous contributions of the European Union through the European Commission, France, Germany, Norway, the Netherlands, the United States of America, and the private sector companies.

Our future challenge will be to continue provide current levels of support to the ITTO and CITES member countries that are increasingly reaching out to us to assist them in more effectively implementing CITES for listed tree species.

During this week’s meeting colleagues from both the ITTO and CITES Secretariats will be presenting a progress report under Agenda item 10 on Enhancing Cooperation between ITTO and CITES, where such issues can be further explored, and the ITTO-CITES Advisory Committee will convene in the margins of this meeting with participating countries, donors and representatives of the two Secretariats.

And I would like to take this opportunity to thank and acknowledge both the ITTO and CITES teams for their exemplary work. These teams, led by Steve Johnson and Milena Sosa Schmidt respectively, include the three regional coordinators and many other dedicated individuals who contribute towards the implementation of this programme across the 11 participating countries.

The number of people to thank numbers over 100, far too many to mention by name – but thanks go to each one of them for making this joint programme both effective and unique.

Distinguished delegates, the Conference of the Parties to CITES, in common with many UN institutions and other entities, regularly calls for increased synergy and collaboration between intergovernmental organizations.

There are few better examples of successful collaboration that leads to such tangible results in the field than the one between our two organizations – and I sincerely thank the Executive Director, Emmanuel Ze Meka and his hard working team for their commitment and camaraderie.

Through our collective efforts we are ensuring that wild plants, and the animals that depend upon them, in their many beautiful and varied forms, will be protected for this generation and the generations to come, for which I thank all of you present here today.

I wish you a very successful Council meeting and thank you again for inviting me here today.