World Wildlife Day highlights importance of sustainable use of wildlife for people, planet and prosperity in “biodiversity super year”

Press releases
Other news items
News and highlights
For use of the media only;
not an official document.

World Wildlife Day highlights importance of sustainable use of wildlife
for people, planet and prosperity in “biodiversity super year”

World Wildlife Day is celebrated this year under the theme "Sustaining all Life on Earth", highlighting the unique place of wild fauna and flora as essential components of the world’s biodiversity, as well as a key pillar of livelihoods for people, particularly among communities that live close to nature. The events also came as part of what has been dubbed the ‘biodiversity super year’. 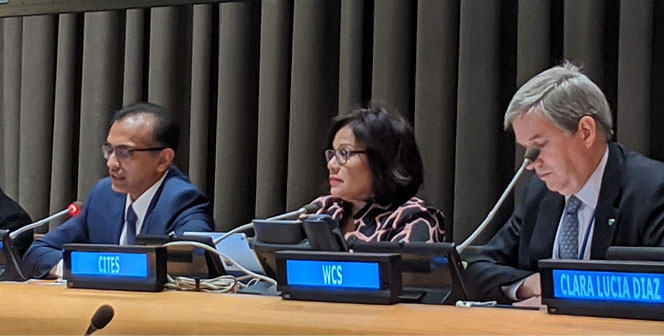 Our planet is currently facing the urgent challenge that is the loss of biodiversity: research by the Intergovernmental Science-Policy Platform on Biodiversity and Ecosystem Services (IPBES) says up to a million species could disappear in the coming decades if unsustainable human activity, climate change and habitat degradation are left unchecked. Raising awareness of this alarming trend and driving discussions towards solutions to bend the curve of biodiversity loss through conservation and sustainable use were the goals of this year’s World Wildlife Day celebrations.

In his message for this World Wildlife Day, UN Secretary-General Antonio Guterres said that "On this World Wildlife Day, let us remind ourselves of our duty to preserve and sustainably use the vast variety of life on the planet. Let us push for a more caring, thoughtful and sustainable relationship with nature. A world of thriving biodiversity provides the foundation we need to achieve our Sustainable Development Goals of a world of dignity and opportunity for all people on a healthy planet."

The Ambassador of India to the United Nations in New York,  the Head of the Delegation of the European Union to the United Nations,  the CITES Secretary-General, the President of the Wildlife Conservation Society, and a representative of rural communities in Colombia provided opening remarks at the event at the UN Headquarters in New York, stressing the significance of the day and of this year’s theme.

A panel of expert speakers that included Permanent Representatives of the UN missions of Costa Rica and Germany, as well as representatives of UNEP, IUCN Sustainable use and Livelihoods Specialist Group (SULi), a youth actvist, engaged in discussions on the challenges that lay ahead in finding the right balance between use of wildlife and the need to conserve biodiversity, habitats and ecosystems.

For the fifth year running, one of the World Wildlife Day activities was co-organized with Jackson Wild™ and featured a film showcase based on the year’s theme. Attracting nearly 350 entries, the competition saw a wide array of filmmakers with a passion for wildlife bring to the screen some gripping stories centred on biodiversity and the interaction between people and wildlife. Once again, these films will provide a strong tool to mobilize and inspire the public for the cause of conservation and to raise awareness of the threats weighing on our world’s wild fauna and flora. 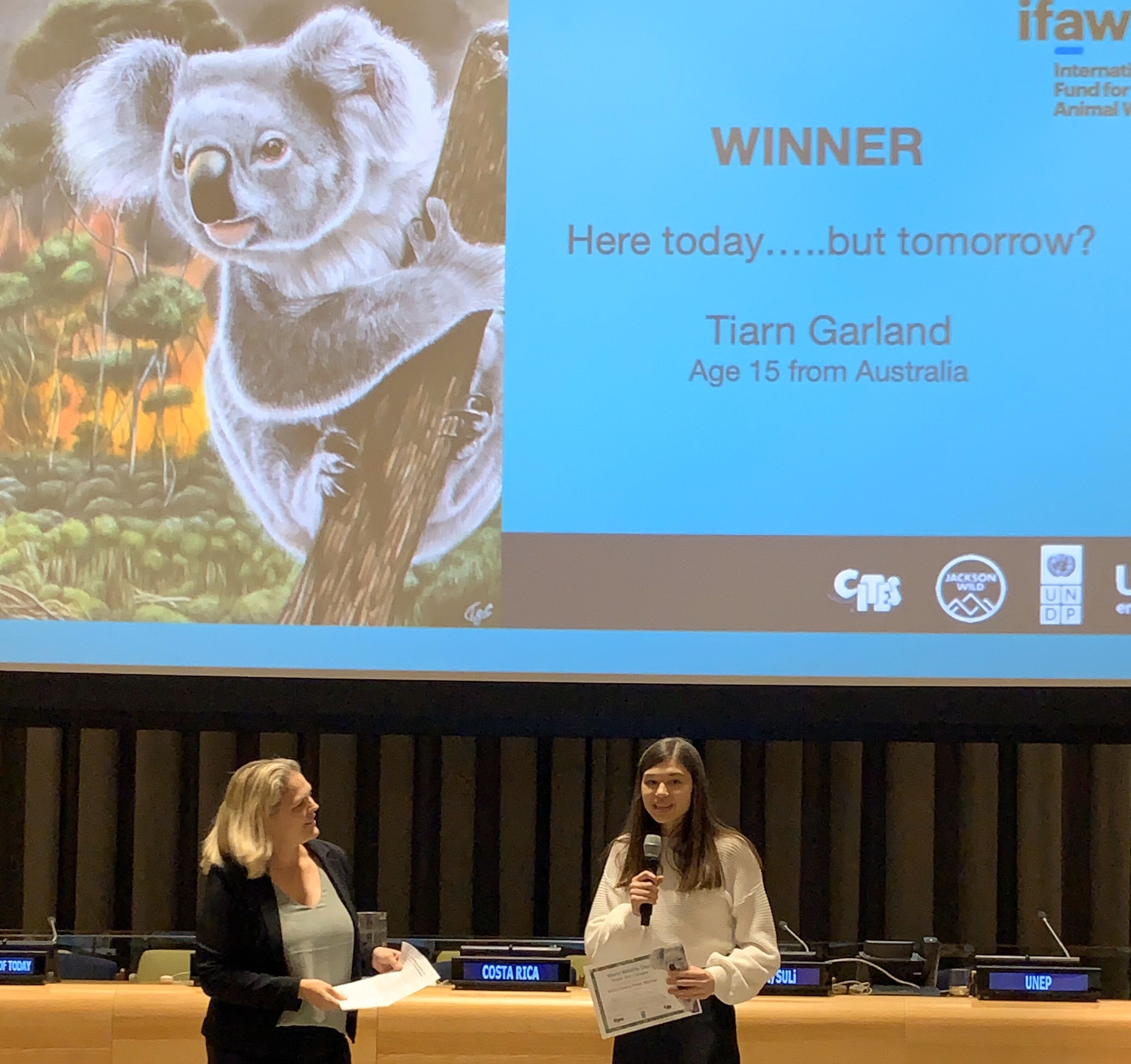 Another artistic highlight was the second international World Wildlife Day youth art contest organised with the support of the International Fund for Animal Welfare (IFAW), and which called on school age and youth artists to illustrate the day’s theme through their art.

Winners of both contests were announced during the high-level event at the UN Headquarters in New York.

The event in New York City was also graced by a moving musical interlude, courtesy of the UN Chamber Music Society, with a wildlife-themed performance.

Earlier that day, representatives of Colombia and Costa Rica spoke at the World Wildlife Day celebrations at the United Nations Palais des Nations in Geneva, Switzerland. They joined biodiversity experts from IUCN and the Ramsar Convention on Wetlands, the United Nations Special Rapporteur on Human Rights and the Environment, and a representative of the private sector from Swiss luxury group Richemont for an event co-organized by the CITES Secretariat and the Geneva Environment Network.

Beyond these two official events, States, organizations and civil society groups celebrated the day through their own events around the world. Photographic competitions in Accra, Ghana; a symposium in Bhopal, India; a forum on crocodile conservation in the Philippines; reforestation days in Nicaragua; giant billboards promoting World Wildlife Day across the United States on billboards; and the lighting of the Empire State Building in New York, all together honoured the day.  All in all, people around the world passionate about wildlife and biodiversity joined in on the World Wildlife Day celebrations and took the time to show their appreciation for the value of wild fauna and flora for people, planet and prosperity.

"As we face a biodiversity crisis of such staggering magnitude, we know that, now more than ever, it is imperative that we remind everyone of the immense value of wild fauna and flora for the planet. Human societies and economies rely on biodiversity in fundamental ways. 2020 is the year to reset humanity’s relationship with nature and to start the transformative changes for both people and our planet. We believe this year’s World Wildlife Day will contribute to raising worldwide awareness of just how essential wildlife is for, as well as their livelihoods."

"We can still reverse the trend of biodiversity loss. This year, the world will come together to act for wildlife and bend the curve on biodiversity loss, as Parties to the Convention on Biological Diversity (CBD) are expected to adopt an ambitious and transformative post-2020 global biodiversity framework at the UN Biodiversity Conference in Kunming, China. As governments negotiate the post-2020 framework, increasing the sustainability of wildlife use and management is a priority. In doing so, we must take on the challenge of ending unsustainable exploitation of resources, including wildlife and their ecosystems, while preserving the livelihoods of the communities that depend on them."

"The evidence is clear - human activity is by far the greatest cause of habitat loss and results in loss of wildlife that require those habitats," said Susan Gardner, Director of UNEP's Ecosystems Division. "Sustainable conservation must be based on an appreciation of the interdependency of people and wildlife in order to reimagine a future where the livelihoods of farmers are secured while simultaneously reducing the risks to wild animals that share the land."

"Wildlife and biodiversity underpin the well-being, safety, and resilience of all societies. One million animal and plant species are at risk of extinction in the coming decades. Billions of families and communities who depend on wildlife and nature for food, water, and their livelihoods are also at risk, as are our economies. If we’re to achieve the Sustainable Development Goals, we must reverse this trend now and put nature at the heart of development. Through World Wildlife Day we are helping raise awareness of the importance of investing in nature and scaling up solutions through a coaltion of  public, private sector, and civil society partners."

"It is no longer sufficient to simply raise public awareness about biodiversity loss, media must ignite tangible action to protect and restore our planet and its diverse wildlife. We're extremely proud of the World Wildlife Day Film Showcase winners because these films go beyond amplifying reasons to care and inspiring awe for our fragile, but resilient planet. They empower the radical changes that will be required to save humanity from ourselves."

The United Nations Development Programme (UNDP) partners with people at all levels of society to help build nations that can withstand crisis, and drive and sustain the kind of growth that improves the quality of life for everyone. On the ground in more than 170 countries and territories, UNDP offers global perspective and local insight to help empower lives and build resilient nations. www.undp.org.

UNEP is the leading global voice on the environment. It provides leadership and encourages partnership in caring for the environment by inspiring, informing and enabling nations and peoples to improve their quality of life without compromising that of future generations. Read more about UNEP’s wildlife campaigns, Wild for Life and Glowing Gone.

About the Convention on Biological Diversity:

Opened for signature at the Earth Summit in Rio de Janeiro in 1992, and entering into force in December 1993, the Convention on Biological Diversity is an international treaty for the conservation of biodiversity, the sustainable use of the components of biodiversity and the equitable sharing of the benefits derived from the use of genetic resources. With 196 Parties, the Convention has near universal participation among countries.  The Convention seeks to address all threats to biodiversity and ecosystem services, including threats from climate change, through scientific assessments, the development of tools, incentives and processes, the transfer of technologies and good practices and the full and active involvement of relevant stakeholders including indigenous and local communities, youth, NGOs, women and the business community.

The Convention on International Trade in Endangered Species of Wild Fauna and Flora (CITES) was signed on 3 March 1973 and entered into force on 1 July 1975. With 183 Parties (182 countries + the European Union), it remains one of the world's most powerful tools for wildlife conservation through the regulation of international trade in over 36,000 species of wild animals and plants. CITES-listed species are used by people around the world in their daily lives for food, health care, furniture, housing, tourist souvenirs, cosmetics or fashion. CITES seeks to ensure that international trade in such species is sustainable, legal and traceable and contributes to both the livelihoods of the communities that live closest to them and to national economies for a healthy planet and the prosperity of the people in support of UN Sustainable Development Goals.

For 25+ years, Jackson Wild™ has convened filmmakers, conservationists and innovators who share this urgency of purpose. Media serves to engage public audiences as well as core influencers and policy-makers with important on-the-ground science and conservation efforts to save our planet while the window of opportunity still exists. In the final week of September, filmmakers, conservationists and innovators will gather in the inspiring landscape of Neusiedler See - Seewinkel National Park, a UNESCO World Heritage Site, to deeply engage on the critical issues facing our planet. It’s an extraordinary convening where collaboration and innovation thrive, ideas are launched, and strategic partnerships are forged.