Welcome and Opening Remarks by co-Hosts

Representatives of Member States (including Heads of State as well as Ministers), International Organizations, UN agencies and Non-Governmental Organizations made interventions.

Moderator: John E. Scanlon, Secretary-General of the “Convention on International Trade in Endangered Species of Wild Fauna and Flora” (CITES) 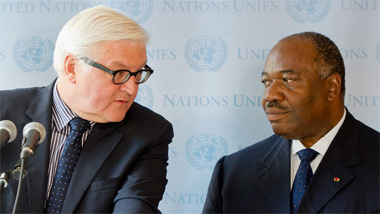 1. There was overwhelming support for Gabon and Germany bringing this matter to the margins of the UN General Assembly (UNGA) for the second time1and some called for a third event to be held in September 2015.

2. The change in the scale and nature of illegal wildlife trade was seen as presenting a pressing global problem that requires shared solutions at all levels – recognizing that no one country, region or agency working alone will be able to succeed. In this context, the need for an enhanced collective effort within and between States, regions and agencies was highlighted. This included working across source, transit and destination States and tackling both demand and supply.

There was wide acceptance that poaching and illegal wildlife trade is a multi-facetted issue – encompassing development, economic, environmental, social and security dimensions, with some noting links to the rule of law and others referencing paragraph 203 from The Future We Want.

Some stressed the need for additional financial resources.

3. A leadership role for the UN was widely supported and several called for a Special Representative of the Secretary-General on the issue.

Wide support was expressed for a dedicated, action-oriented UNGA resolution on the issue.

One also suggested the UN Secretary-General present an annual report to the UNGA on the contribution made by UN agencies.

Several noted the links to the Sustainable Development Goals (SDGs) and supported an inclusion of the issue in the Post 2015 Development Agenda.

4. The fact that good progress is being made in combating illegal wildlife trade in certain areas was acknowledged, while also noting that more needs to be done.

CITES was widely recognized as the principal legal instrument and some referenced the importance of meeting their commitments under CITES and the measures they are taking to do so.

The collaborative initiative ICCWC (the International Consortium on Combatting Wildlife Crime2) was referenced as providing coordinated enforcement support to countries and regions.

The existing contribution of the UN to ICCWC, as well as the work of UNDP, UNEP and UNODC was recognized and particular initiatives were highlighted, including on rural livelihoods, rule of law and the use of modern criminal investigative techniques.

Several stressed the importance of not duplicating CITES and other existing efforts.

Some made positive reference to the declaration of 3 March as UN World Wildlife Day (which was supported at the 2013 event hosted by Gabon and Germany3).

5. Specific examples were provided of the impacts of illegal wildlife trade, including the loss of tourism benefits, on local communities and their livelihoods, and on ecological integrity – and one referred to the need for people to negotiate a peace with nature.

The involvement of transnational organized criminals – and in some regions heavily armed rebel militia – was noted and many stressed the importance of good enforcement and treating wildlife crime as a serious crime.  One referred to a possible Protocol under the UN Convention on Transnational Organized Crime.

Some referred to the recent destruction of confiscated ivory and rhino horn across multiple continents as a means of focusing attention on curbing the demand for illegally traded wildlife.

The need to focus efforts on providing support to those people who are serving in the frontlines was stressed by some, and one highlighted the impacts on rangers who are being injured and killed in the field and another referred to poachers tearing local communities apart.

6. Reference was made by some to the African led Elephant Protection Initiative (EPI) and more States were encouraged to join; reference was also made to the Botswana Elephant Conference, the London Conference on the Illegal Wildlife Trade and the Clinton Global Initiative (CGI), and several highlighted the valuable role played by UN Goodwill Ambassadors for public outreach and future opportunities to deploy these Ambassadors.

1  High-level Panel Discussion: "Poaching and Illicit Wildlife Trafficking – A multidimensional crime and a growing challenge to the international community"

3  On 20 December 2013, the Sixty-eighth session of the UNGA decided to proclaim 3 March, the day of the adoption of CITES (the Convention on International Trade in Endangered Species of Wild Fauna and Flora), as World Wildlife Day.

See also the programme of the event.