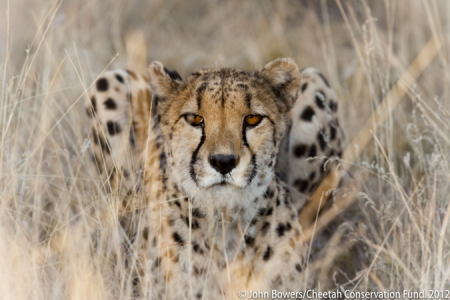 The cheetah Acinonyx jubatus, the world’s fastest cat, has been included in CITES Appendix I since 1975, where the following annotation applies: “Annual export quotas for live specimens and hunting trophies are granted as follows: Botswana: 5; Namibia: 150; Zimbabwe: 50. The trade in such specimens is subject to the provisions of Article III of the Convention”.

In 2009, it was listed also in Appendix I of the Convention on the Conservation of Migratory Species of Wild Animals (CMS), except for its populations in Zimbabwe. Populations of Botswana and Namibia are also not listed as the two counties are not Parties to CMS.

Cheetahs face a variety of pressures to their existence in the wild, including habitat loss, hunting of their prey base for bush-meat, illegal international trade and conflict with livestock owners.

Globally, this species is considered Vulnerable in the IUCN Red List of Threatened SpeciesTM, with a declining extant population of less than 7,000 individuals found primarily in the savannahs of Africa. While southern Africa is the cheetah’s regional stronghold, it is considered Critically Endangered in the North and West Africa. A small and remnant Asiatic population exists also in the Islamic Republic of Iran, where it is assessed as Critically Endangered. 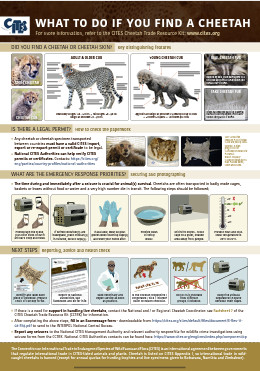 Other materials and resources

Exhanging and sharing information on cheetahs

Parties, experts, intergovernmental and non-governmental organizations, and other stakeholders which would like to share information on cheetahs, can provide such information to the Secretariat for publication on the web page, as appropriate.

Information submitted using the above link will be, as appropriate, posted under the heading Information on cheetahs on this web page.

CoP19 Inf. 23 The situation of the cheetah in Asia

Links to other pages