A Brief History of Sturgeons & CITES

Acipenser brevirostrumlisted in Appendix I in 1975

Acipenser oxyrhynchus listed in Appendix I in 1975, transferred to Appendix II in 1979

Acipenser sturiolisted in Appendix II in 1975, transferred to Appendix I in 1983

All other Acipenseridae listed in Appendix II on 1 April 1998

At CoP10 (Harare, 1997), Germany and the United States of America submitted a proposal to include 23 species of Acipenseriformes in Appendix II, to join those already covered by the Convention. The proposal was adopted by consensus, thereby including all sturgeon species under CITES. The listing entered into force on 1 April 1998 to allow Parties time to put in place all necessary controls and management plans prior to its implementation.

The listing of sturgeons was accompanied by the adoption of Resolution Conf. 10.12, Conservation of sturgeons, which assisted range States and consumer countries in implementing the provisions of the Convention for these valuable fishes. The Resolution urged range States and Parties to encourage scientific research to promote the sustainability of sturgeon fisheries in the Eurasian region, to curtail illegal fishing and exports and to promote regional agreements between range States to bring about proper management and sustainable utilization of sturgeons. Range States were encouraged to provide names of legal exporters of sturgeon products, and were requested to consider the feasibility of developing annual quotas for sturgeon products. The Resolution asked Parties to consider setting a maximum allowance of 250 g of caviar per person as a personal effects exemption under CITES Article VII.

The Resolution recommended that the Secretariat, in consultation with the Animals Committee, explore marking systems for sturgeon products, and that the Animals Committee consider sturgeons under the Review of Significant Trade. This Review resulted in primary and secondary recommendations for 10 species of sturgeons, which were communicated to the range States in February 2001. At its 45th meeting (Paris, June 2001), the Standing Committee agreed on the recommendations of the Secretariat for Caspian Sea stocks of Acipenser gueldenstaedtii, A. nudiventris, A. stellatus and Huso huso, in document SC45 Doc.12.2. 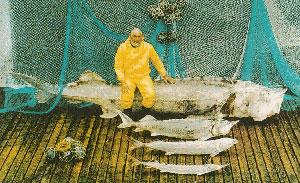 Two Decisions of the Conference of the Parties were adopted at CoP11 (Gigiri, 2000). Decision 11.58 instructed that starting from 1 January 2001, range States had to declare coordinated intergovernmental level annual export and catch quotas per basin, or biogeographical region where appropriate, for all commercial trade in specimens of Acipenseriformes. Parties also had to inform the Secretariat of the quotas prior to 31 December of the preceding year. Parties that failed to inform the Secretariat were automatically treated as having a zero quota for the following year. Decision 11.59 instructed all Parties engaged in trade in sturgeon and paddlefish specimens to report to the Secretariat on the progress made to implement the measures agreed upon in the Resolution.

These Decisions were subsequently incorporated into Resolution Conf. 12.7. This Resolution itself was amended and further strengthened in 2004 [see Resolution Conf. 12.7 (Rev. CoP13)], with the inclusion inter alia of obligations on importing and re-exporting as well as exporting States to register processing and repackaging plants where this is consistent with national law. The Conference of the Parties also adopted at its 13th meeting Decisions 13.44 to 13.47 on Conservation of and trade in sturgeon and paddlefish.