Sturgeons are among the world's most valuable wildlife resources. These northern hemisphere fishes can be found in large river systems, lakes, coastal waters and inner seas throughout Azerbaijan, Bulgaria, China, the Islamic Republic of Iran, Kazakhstan, Romania, the Russian Federation, Turkmenistan, Turkey, Ukraine, other European countries and North America. For people around the world, caviar, i.e. unfertilized sturgeon roe, is a delicacy. For the range States, sturgeons are a major source of income and employment, as well as an important element of the local food supply. Current trends in illegal harvest and trade put all these benefits at risk.

Since 1998, international trade in all species of sturgeons has been regulated under CITES owing to concerns over the impact of unsustainable harvesting of and illegal trade in sturgeon populations in the wild. The situation in the Caspian Sea, where most of the world's caviar is produced, became particularly worrying after the break-up of the Union of Soviet Socialist Republics, which led to the virtual collapse of existing management and control systems. The resulting over-exploitation of sturgeon stocks gave rise to a recognition of the urgency to prevent further depletion and to restore the species stocks. To achieve this, the rate of exploitation must not exceed the capacity of regeneration of the species. In other words, trade in these species must be regulated to avoid over-exploitation. 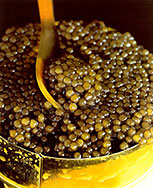 When the decline of sturgeon stocks became evident at the 10th meeting (Harare, 1997) of the Conference of the Parties, the Parties decided to regulate the international trade in sturgeons. This was an important step to ensure long-term conservation and better management of the species - and essential to preserve the resource for future generations

All sturgeons and parts or derivatives thereof (e.g. caviar, meat, skin, etc.) that enter international trade require the issuance of CITES permits or certificates. The permit system established by CITES allows regulation of trade and makes it easy to trace the source of any given shipment of caviar. Furthermore, the Conference of the Parties recommended at its 11th meeting (Gigiri, 2000) the introduction of a universal system for caviar labelling to assist the Parties in identifying legal caviar in trade Listing sturgeon species in the CITES Appendices was nevertheless only the first step to regulate and maintain sturgeon stocks to ensure that the international trade in them becomes sustainable. The Parties to CITES acknowledged that the listing would not be enough in itself, and since 1998 a number of conservation management initiatives have been developed and improved, including fishery management programmes, improving legislation, promoting regional agreements, development of marking systems, aquaculture and the control of illicit trade. These are currently set out in Resolution Conf. 12.7 (Rev. CoP13).

The CITES Review of Significant Trade

The Review of Significant Trade is the Convention's mechanism for remedial action when there is reason to believe that Appendix-II species are being traded at significant levels without adequate implementation of CITES provisions. If implemented correctly, the process acts as a safety net for the Convention by ensuring that species are harvested sustainably. This process, detailed in Resolution Conf. 12.8 (Rev. CoP13), is implemented by the Animals and Plants Committees.

In Resolution Conf. 10.12 and later Resolution Conf. 10.12 (Rev.) the CITES Animals Committee was instructed to include the Acipenseriformes (sturgeons and paddlefish) in its Review of Significant Trade. This review determined that several species of sturgeons were unsustainably exploited in a number of areas, primarily through illegal fishing. Other species were being fished at their biological limit and were considered to be vulnerable to declines unless management plans and significant reduction of harvesting were not put in place. This review was largely based on information provided by the range States themselves. It showed a clear pattern of declining yields in the Caspian and Black Sea sturgeon populations that required immediate attention.

The end result of this review was a series of recommendations made by the Standing Committee at its 45th meeting, in Paris, in June 2001. Most of these have been implemented over the course of subsequent years (see SC47 Doc. 11).