ICCWC considers ‘wildlife’ to include all wild fauna and flora, including animals, birds and fish, as well as timber and non-timber forest products. ‘Wildlife crime’ refers to the taking, trading (supplying, selling or trafficking), importing, exporting, processing, possessing, obtaining and consumption of wild fauna and flora, including timber and other forest products, in contravention of national or international law. 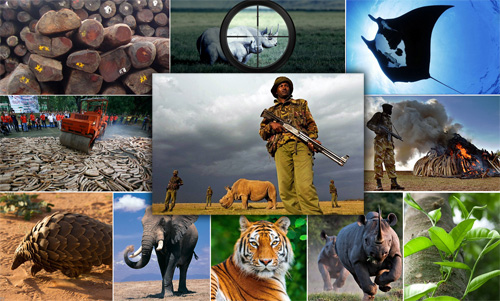 The world has been confronted by wildlife crime for decades, but in recent years there has been a change in the scale and nature of this illicit activity. Wildlife crime has become a serious threat to the security, political stability, economy, natural resources and cultural heritage of many countries and regions. It threatens the survival of some of the world’s most charismatic, as well as many lesser-known species. Wildlife trafficking can destroy the natural resources on which national economies and livelihoods depend. It undermines conservation efforts, as well as efforts to eliminate poverty and to develop sustainable economic opportunities for rural communities.

The adoption of several Resolutions, Statements and Declarations in different fora and at the highest levels reflects the heightened level of political concern over the devastating impacts of poaching and illegal trade in wildlife. These, for example, include inter alia  the United Nations General Assembly Resolutions adopted in 2015, 2017 and 2019, which highlight the seriousness of the problem, the involvement of organized crime groups, and the need for coordinated and determined efforts to combat illicit trafficking in wildlife effectively. Further, the Sustainable Development Goals (SDGs) adopted by the United Nations Sustainable Development Summit in September 2015, call for the protection of wild fauna and flora as well as the ecosystems upon which they depend, and addresses tackling illegal trafficking in wildlife through specific Targets under Goal 15 "Life on Land".

The increased involvement of organized crime groups has changed the dynamics needed to address wildlife crime. As a consequence, law enforcement authorities around the world face an increasingly difficult and complex task, as they seek to scale up their fight against wildlife crime. The activities of these organized crime groups span across national boundaries and continents, and fraud, counterfeiting, money-laundering, violence and corruption are often closely linked with various forms of wildlife crime. For additional details click here.

What are the challenges to effective law enforcement?

National agencies responsible for wildlife law enforcement face many challenges, including addressing the increasingly complex nature of wildlife crime. Challenges include: poor governance, inadequate legislation; lack of equipment; limited training opportunities; difficulty accessing modern enforcement tools such as analytical and forensic science support; a lack of intelligence-gathering capacity and risk management practices; and a lack of awareness among prosecutors and the judiciary of the seriousness of wildlife crime. Special investigative techniques, such as those used by Financial Intelligence Units are often under-utilised in wildlife crime investigations. Wildlife law enforcement officers also often lack parity with their counterparts in Customs and Police services, and due to the diverse nature of wildlife crime, may be ill-prepared to effectively respond to the challenges it presents.

Poorly targeted and misdirected wildlife law enforcement can place undue burdens on rural people and local communities. It can inadvertently weaken much needed support for law enforcement and divert key resources from where they are most needed. As with other forms of crime, wildlife law enforcement needs to be conducted in accordance with national requirements for due process and with respect for human rights, public safety, and the rights of the accused.