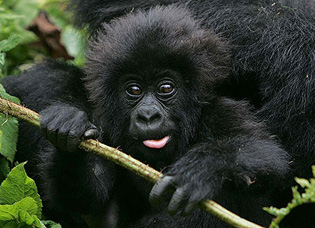 CITES Secretariat confirms the arrest of former wildlife director in Guinea and applauds national authorities' work
The CITES Secretariat has received formal confirmation from INTERPOL, an ICCWC (International Consortium on Combating Wildlife Crime) partner, that Mr. Ansoumane Doumbouya, the former wildlife director and head of the CITES Management Authority of Guinea was arrested on 14 August 2015 by the Police (the National Central Bureau of Interpol) for his suspected role in corrupt and fraudulent actions in the issuance of CITES export permits. See more.
Sixty-fifth meeting of the CITES Standing Committee on great apes
Great apes were addressed under several agenda items at the 65th meeting of the CITES Standing Committee and covered by several working groups including the Working Group on Bushmeat and the Enforcement Working Group. At the recommendation of the Secretariat,  subject to external funding, a report on the status of great apes will be commissioned for consideration at the 67th meeting of the Committee. See more.
Great apes exported from Guinea to China from 2009 to 2011
The Secretariat issued a statement in January 2014 to provide the factual background in relation to trade in live great apes from Guinea to China between 2009 to 2011.
Key CITES CoP Resolutions and Decisions relating to great apes

Cooperation between CITES and GRASP

In 2006, the CITES and GRASP Secretariats began technical missions to Asia to study the illicit trade in orang-utans. The first such mission was conducted in Indonesia. From 23-28 April 2007, further missions were conducted to Thailand and Cambodia. The final mission was conducted in November 2007 to Malaysia. The distribution of the Indonesia mission report was initially restricted but it was agreed at the 54th meeting of the Standing Committee (Geneva, October 2006) that it would be made public, along with Indonesia's response.