CITES Secretary-General's remarks at the 25th session of the Commission on Crime Prevention and Criminal Justice - Vienna, Austria

CITES and the UN Conventions against Corruption and Transnational Organized Crime

25th session of the Commission on Crime Prevention and Criminal Justice

I would like to express my sincere thanks to the Commission for the opportunity to address you this morning.

This Commission is very familiar with the scale and nature of illicit wildlife trafficking and the devastating impacts it has not only on animals and plants and entire ecosystems – but on development, local livelihoods and in some cases national economies and security.

This Commission was in fact at the forefront of bringing this issue to the attention of the United Nations through the resolutions it has proposed to ECOSOC over many years: going all the way back to 2001 and most recently in 2013, which was the last time I addressed you.

The landmark 2015 UN General Assembly Resolution on tackling illicit wildlife trafficking reflects the level of international consensus that now exists around bringing these highly destructive crimes to an end. 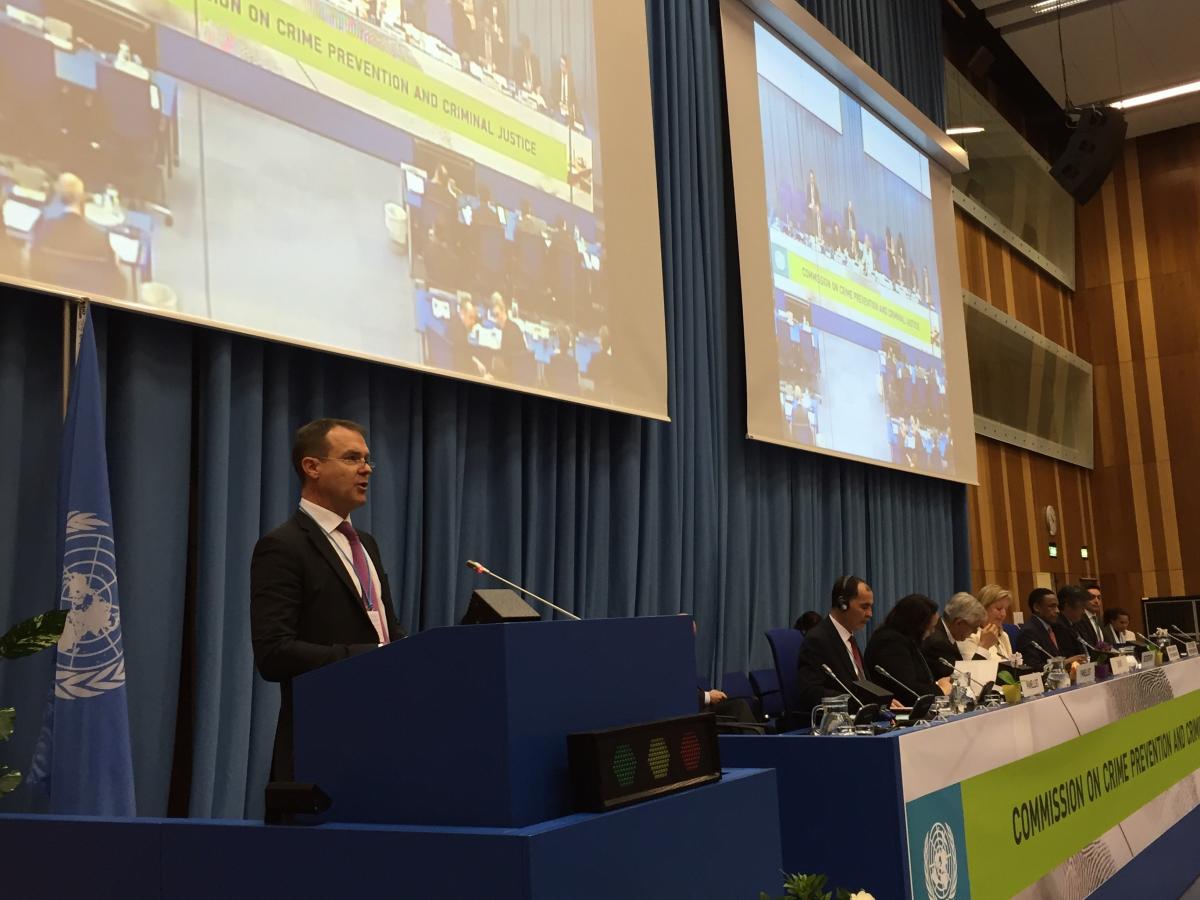 The UNGA Resolution highlights the central roles of CITES and the two UN Conventions against corruption and transnational organized crime and of ICCWC – the International Consortium on Combating Wildlife Crime – in tackling illicit wildlife trafficking. It also encourages States to treat illicit wildlife trafficking as a serious offence where transnational organized criminal groups are involved, which emerged from the resolution you adopted in 2013 and is something Executive Director Fedotov and I have promoted at side events here in 2013 and in Doha at the Crime Congress in 2015.

But we are not just talking about resolutions – since the establishment of ICCWC in November 2010, and UNDOC was a founding member, we have been providing front line support to countries to tackle illicit wildlife trafficking. In the time I have available I would like to highlight just a few of the many initiatives of ICCWC, and in particular those that have been led by UNODC for the Consortium:

The World Wildlife Crime Report shows that illicit wildlife trafficking affects all regions in different ways and across different species, be it mammals in Asia and Africa, corals in Oceania, reptiles in Europe and North America or birds in Central and South America. It also confirms the industrial scale and serious nature of this illicit trade, which is being driven by transnational organized criminal groups and is perpetuated by corruption, as well as the importance of CITES and the two UN Conventions against corruption and transnational organized crime working together, which was also highlighted in the UNGA Resolution.

CITES sets the international rules that criminals try and evade and the two UN Conventions are the key instruments for tackling the transnational organized criminal groups that are driving this industrial scale illicit trade and the pervasive corruption that enables it.

I am delighted to report to you today that the cooperation between CITES and UNODC and the two UN Conventions against corruption and transnational organized crime is at an all time high and is only getting stronger – and I would like to express my sincere thanks to Executive Director Fedotov and his staff for their extraordinary support.

Looking ahead, our challenge is to significantly enhance the efforts that are already underway – to capture the high level of political interest and additional financing that is becoming available to ensure that we:

The 182 Parties to CITES meet once every three years and they will next convene in Johannesburg South Africa on 24 September where these issues and many more will be on the Agenda. We hope to see you all in South Africa.