Geneva, 11 April 2016 - The illegal logging and trafficking of Siamese rosewood (Dalbergia cochinchinensis) is causing the serious decline of these species in the wild, and considerable damage to the ecological integrity of Southeast Asian forests. Siamese rosewood is a CITES Appendix II listed species that is native to the Indo-China sub region, and is only found in Cambodia, Lao People's Democratic Republic, Thailand and Viet Nam. 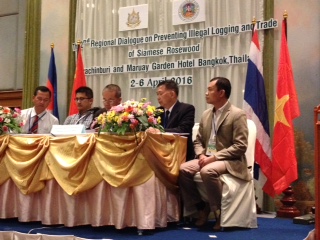 In response, the Department of National Parks, Wildlife and Plant Conservation (DNP) of the Kingdom of Thailand hosted a 1st Regional Dialogue on Preventing Illegal Logging and Trade of Siamese Rosewood in Bangkok, Thailand, in December 2014, which identified concrete action points for range, transit and consumer countries to curb the illegal Siamese rosewood trade.

The 2nd Regional Dialogue, which built on the outcomes of the first meeting, was organized by DNP in Bangkok, Thailand, from 4 to 5 April 2016.  Participating countries jointly agreed on a number of countermeasures, such as: revisions of policy and legal framework; strengthen capacity building; enforcement cooperation, and reducing consumer demand to be given the highest priority.

“These concrete steps initiated by Thailand, in cooperation with Cambodia, China and Viet Nam, are critical if we are to put an end to illegal logging and illegal trade in Siamese Rosewood. Success will rely upon range, transit and consumer countries taking strong action against organized criminals and to eliminate the corruption that enables these highly destructive crimes to occur.  Close cooperation with the industry to reduce the demand of illegally traded rosewood, and with local communities to achieve sustainable and legitimate livelihood opportunities for individuals, must also be a part of the solution, “ said John E Scanlon, Secretary General of CITES.

The Dong Phayayen-Khao Yai Forest Complex In Thailand, a UNESCO World Heritage Site since 2005, has in recent years come under increasing pressure from illegal logging of Siamese Rosewood. On 3 April, delegates attending the 2nd Regional Dialogue, had the opportunity to visit the Thap Lan National Park, one of the affected national parks in the Forest Complex and learned from the experiences and challenges of law enforcement officers and park rangers to prevent and suppress illegal logging.

For many years, the CITES Secretariat and UNESCO have joined their efforts to fight wildlife crimes, with the full support of the World Heritage Committee. The CITES Secretariat, in close cooperation with its partners in the International Consortium on Combatting Wildlife Crime (ICCWC), supports countries in their efforts to strengthen their legal framework and to combat wildlife crime.

Representatives from Cambodia, China, Vietnam and Thailand attended the 2nd Dialogue. The CITES Secretariat, the Food and Agriculture Organization of the United Nations (FAO), INTERPOL, the International Tropical Timber Organization (ITTO), the International Union for Conservation of Nature (IUCN) and the World Customs Organization (WCO) Regional Intelligence Liaison Office in Asia/Pacific, and other intergovernmental organizations also actively participated in the dialogue, alongside representatives from a number of non-governmental organizations.