International consortium was launched at Global Tiger Forum in Saint Petersburg, Russia, in 2010

Geneva, 23 November 2015 - The increased involvement of organized crime groups and on some occasions rebel militia, has changed the dynamics of combating wildlife and forest crime. The International Consortium on Combating Wildlife Crime (ICCWC) was formed to ensure a formidable and coordinated response to such crimes and to assist law enforcement authorities around the world with the increasingly difficult and complex situations they face in their fight against this highly destructive criminal activity. 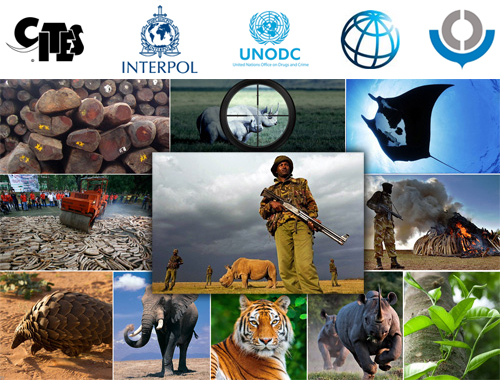 Five years after the signature of a Letter of Understanding on 23 November 2010, the five inter-governmental organizations that form ICCWC, namely the Convention on International Trade in Endangered Species of Wild Fauna and Flora (CITES) Secretariat, INTERPOL, the United Nations Office on Drugs and Crime (UNODC), the World Bank and the World Customs Organization (WCO), celebrate the 5th anniversary of the launch of the Consortium.

Globally, there is strong recognition of the need for increased international collaboration and coordination to combat illicit trafficking in wildlife. United under ICCWC, the five organizations have a unique pool of thematically relevant technical and programming expertise, that present the opportunity for a novel approach to the multi-facetted challenges posed by wildlife crime. Since its creation, the important role of ICCWC has been widely recognized, most recently by the UN General Assembly adopted Resolution on Tackling Illicit Trafficking in Wildlife, which includes a recognition of ICCWC and acknowledges the valuable technical assistance ICCWC can provide to support member states efforts to tackle illicit trade in wildlife.

Mr John E. Scanlon, CITES Secretary-General, said: “ICCWC is developing the tools and providing the coordinated support and services that countries need to enable them to confront the organised criminal groups that are driving industrial scale poaching and smuggling. It is giving front line officers combating wildlife crime the ability to deploy the same tools and techniques used to combat other serious crimes, which is essential if we are to win this fight”.

“The Consortium has benefited from the strong support of the executive heads of each of the five partner organisations, and generous financial support from multiple donors, including the European Commission, the Netherlands, Norway, Sweden, the United Kingdom of Great Britain and Northern Ireland, the United States of America and the World Bank Development Grant Facility, for which we are most grateful. This has enabled the Consortium to deliver a wide range of activities to date” added Scanlon.

Based on the Consortium’s Strategic Mission, ICCWC partners are providing coordinated law enforcement support in many different countries and regions across the world, to enhance the capacity and compliment the efforts of national wildlife law enforcement agencies and sub-regional and regional networks that on a daily basis act to combat the illegal trafficking in wild fauna and flora.

An ICCWC indicator framework for wildlife and forest crime, designed to be completed as a self-assessment of national capacity for law enforcement authorities has also been developed. This indicator framework will complement the Toolkit, and will be launched at the 66th meeting of the CITES Standing Committee in January 2016.

To support countries that have been affected by significant poaching, or that have made a large-scale seizure of CITES specimens, ICCWC has, upon request, deployed Wildlife Incident Support Teams (WISTs), to assist these countries and guide and facilitate appropriate follow-up actions. Such WISTs have been deployed at the request of Sri Lanka and the U.A.E. to assist national authorities to collect DNA samples from a large-scale ivory seizure for forensic analysis. A WIST was also deployed to Madagascar to provide analysis and support on the government’s efforts to deal with illegal logging and trafficking in rosewood and other precious timber species.

In addition, through its global network of regional and country offices, ICCWC has continued to provide specialized training for wildlife law enforcement officers, including specialized training in support of operations and the organization of a number of activities to support the implementation of the recommendations of the ICCWC Toolkit, such as delivering targeted training on CITES and special investigative techniques (Bangladesh, October 2015).

ICCWC continues to support and enhance the capacity of national agencies responsible for wildlife law enforcement to use specialized techniques such as controlled deliveries to combat wildlife crime. This has been done and is ongoing through a number of workshops and projects (China, 2011; Prague, 2015, and related activities of Projects WAYLAY and INAMA).

As part of ICCWC’s portfolio of activities on wildlife forensics, ICCWC developed practical tools and guidelines such as the ICCWC guidelines for forensic methods and procedures of ivory sampling and analysis, and is currently developing similar guidelines for timber.

ICCWC is also developing an anti-money laundering learning programme with a specific focus on wildlife crime, which is expected to be ready by mid-2016, for the training of investigators, prosecutors, judges, and other relevant stakeholders involved in the investigation and prosecution of wildlife crime cases.

ICCWC has contributed to generate high level support to combat illegal trade in wildlife by supporting  and organizing a number of high level conferences and events such as a seminar for Heads of police and Customs on tiger crime, the ICCWC Ministerial roundtable on combating wildlife and forest crime, and a Ministerial-level and Senior Officials meeting on combating poaching and the illegal trade in rhinoceros horn.

Building on its current Strategic Mission, ICCWC will be launching in coming months its Strategic Programme for 2016-2020, the Consortium’s targeted strategy to combat illegal trade in wildlife in a comprehensive and coordinated manner for coming years.

The Consortium would like to thank the European Commission, the Netherlands, Norway, Sweden, the United Kingdom of Great Britain and Northern Ireland, the United States of America and the World Bank Development Grant Facility for their generous support to ICCWC.