The 65th meeting of the CITES Standing Committee (the Committee) in July 2014 had a full agenda that included 53 primary agenda items (and many sub items) and some 70 documents to discuss [1]. It attracted a record number of participants [2] and all agenda items were discussed in open session.

The outcomes of the meeting were significant and they can be found in the executive summaries [3] of the meeting and an official press release [4].  In particular, good progress was made in addressing international trade in many CITES-listed species; improving CITES tools that are available to Parties; and combating the illegal international trade in wildlife as it affects a number of CITES-listed species. 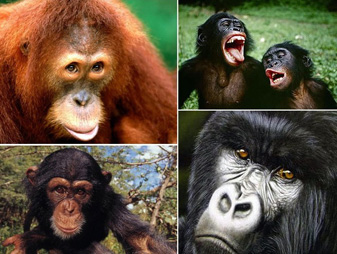 The reports on each of these agenda items, prepared by the Secretariat, are available in the three working languages of the Convention on the CITES website [12].

During the meeting, the CITES Secretariat facilitated the holding of a side event on great apes. The Chair of the Committee also allowed a documentary film-maker interested in great apes to record part of the Committee's proceedings.

The Secretariat’s report on great apes noted that the health of wild populations of great apes in Africa and Asia has been negatively affected by the combined effects of illegal trade in live animals, poaching for bushmeat, disease and habitat loss. Habitat loss and illegal domestic trade in bushmeat are seen as the two most significant factors impacting on great ape populations.

The Secretariat’s report further reported that there was currently no discernible increase in international illegal trade in great apes. It noted that the World Customs Organization (WCO) stated in its Illicit Trade Report 2013[13] that no seizures of illegally traded great apes were reported by its members in 2013.  The Secretariat’s report stated that:  “Data available from official sources for the period since CoP16 [2013] continue to suggest that there is very little illegal international trade in great ape specimens”.

As a result, the Secretariat did not recommend the creation of a specific working group on great apes.  What it did recommend was that the Standing Committee expand the mandate of the Working Group on Special Reporting Requirements to consider how to establish a mechanism for reporting illegal trade in great apes, as mentioned in CoP Decision 16.67 on great apes [14], rather than create a new working group for that specific purpose.  This was agreed by the Committee.

After the meeting, there were criticisms from some non-governmental organizations that the Committee did not create a working group specifically to consider trade in great apes.

The Committee has 19 members.  A request to establish a specific working group on great apes made by one member of the Committee was not supported by any other Committee member.  Other interventions from Committee members instead expressed support for the Secretariat's recommendations and encouraged working with other processes such as the Collaborative Partnership on Wildlife (CPW) – noting that the CITES Secretariat is working with the CPW, GRASP [15] and ICCWC [16] on issues of direct relevance to great apes.

Against this background, the Committee did not consider that a separate working group specifically on great apes was warranted.

The Secretariat requested the Committee to agree that, subject to external funding, it commission a report on the status of great apes for the 67th meeting of the Committee (that will bring the results of various initiatives together). And this was agreed by the Committee [17].

While the Chair of the Committee cannot accept all requests for the floor on every agenda item, because of time constraints [18], with regard to Agenda Items 34.1, 36 and 37 referred to above, the Chair gave every observer Party and intergovernmental and non-governmental organization that had requested the floor the opportunity to speak.

CITES regulates international trade in over 35,000 species of plants and animals.  Of the 26 Standing Committee working groups that are currently active, there are 8 that address particular taxa. These groups have specific terms of reference related to issues emerging from the CoPs, the Animals or Plants Committees or the Standing Committee.

The Committee’s decisions to establish working groups on Asian big cats [19], cheetahs [20] and pangolins [21] at the meeting followed on from relevant CoP decisions and the detailed reports provided to the Committee outlining the serious threats posed to these species from illegal international trade. Advice on high levels of illegal trade in elephants [22], rhinos [23] and rosewood [24] was also available to the Committee.

[17] The Secretariat is currently seeking external funding to commission this body of work as it did for the study on cheetahs.

[18] The Chair clearly explains this at the start of every meeting, as he did at this meeting.  His opening remarks can be found on the CITES website.