CITES Secretary-General John E. Scanlon visited Tokyo and Yokohama from 20 to 22 August 2013,, to promote increased support to implementing new CITES listings. His visit followed similar missions to several capitals, including Brasilia, Brussels, and Beijing, as well as a visit to Bonn. Meetings were held in Tokyo with a number of Ministry officials and other major stakeholders to discuss the effective implementation of CITES CoP16 outcomes, and most notably the shark listings. 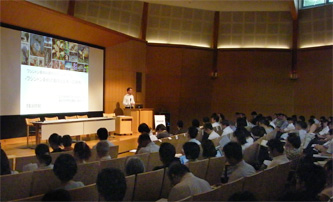 In his discussions, Mr. Scanlon highlighted the new precious timber species brought under CITES controls, the listing of five species of sharks and manta rays, and the Decisions addressing the illegal trade in elephants and rhinos as three major outcomes of CITES CoP16. He encouraged Japan to play an active role in the implementation of these robust measures.  Mr. Scanlon highlighted Japan’s fisheries expertise and noted that, while Japan entered a reservation on the five species of sharks, it had also expressed its willingness to comply with the Convention requirements for export permits, and he expressed his thanks for the offer to provide technical support to the discussions during the 18-month preparatory period for the entry into effect of the sharks listing, including issues related to shark fin identification.

Mr. Scanlon also congratulated Japan, a Party since 1980, for its various efforts and initiatives and recognized the country as a long-standing supporter of the Convention. He welcomed, in particular, Japan’s new initiative to provide support to new CITES Parties, and countries in the process of accession, to improve national laws . He also praised its support to MIKE monitoring work in Asia, as well as its successful suppression of illegal elephant ivory trade, including through awareness-raising, effective enforcement and the provision of market alternatives.

Meetings with other sectors in Japan were held for the first time in the history of CITES.  A seminar took place for the representatives of the Keidanren (Japan Business Federation) Committee on Nature Conservation, where Mr. Scanlon highlighted the examples of successful private sector cooperation that contributed to the improved implementation of CITES, such as reptile skins, vicuña wool, candelilla wax and the African cherry.  He visited JICA headquarters to promote a dialogue with the independent governmental agency that coordinates official development assistance. He also explained to local media emerging issues of concern to Japanese consumers of eels, as well as Bluefin tuna.

TRAFFIC East Asia with the support of the Ministry of Foreign Affairs held a symposium during Mr. Scanlon’s visit to celebrate the 40th anniversary of CITES, with a particular focus on the newly listed shark species.  The summary of the symposium can be found at http://www.traffic.org/home/2013/8/27/traffic-symposium-in-japan-celebrates-cites-and-sparks-dialo.html.

On 22 August Mr. Scanlon visited ITTO headquarters in Yokohama to discuss issues related to the implementation of the CITES CoP16 outcomes on tree species and the enhanced cooperation between CITES and ITTO through the joint ITTO-CITES programme on tree species. Of special interest were the achievements being made by Cameroon on the conservation, management and trade of the dry bark of Prunus Africana (African cherry), and how the good practice can be replicated.  The summary of Mr. Scanlon’s visit to ITTO can be found at: http://www.itto.int/news_releases/id=3681.