The CITES Secretary-General has for the first time met with the 21 Branch offices of the Chinese Management Authority at a National CITES Retreat and Training session held in Jilin Province, China, in July 2013. 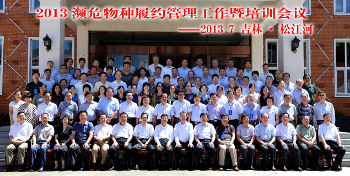 “Participants to the China National CITES Retreat and Training “

The Retreat was addressed by the Vice Administrator of the State Forestry Administration, together with senior representatives of the General Administration of Customs and the Ministry of Foreign Affairs. During the Retreat the Chinese Management Authority reviewed CITES implementation in China over the past two years, addressed the steps being taken across multiple agencies to implement the outcomes of CITES CoP16, and provided various training to the staff of the CITES branch offices.

During the course of his presentation, Mr. John E. Scanlon highlighted: the focus on enforcement at CoP16, in particular regarding the African elephant and illegal trade in ivory; the implementation of new timber listings, including the successes of the ITTO/CITES programme; preparations for the entry into force of new listings of sharks and manta rays, including the meetings held with Brazil, the European Commission and FAO; as well as additional financing to help implement CITES, including through the GEF. Mr. Scanlon also addressed illegal trade in agarwood-producing species, great apes, pangolins, Tibetan antelope, tigers and rhino horn.

“China is a vast country, with a huge population, multiple international borders and high volumes of international trade, which presents unique implementation challenges. China has taken significant measures to meet these challenges and it is, along with other Parties to CITES, further enhancing its efforts to implement the outcomes of CoP16” said John E. Scanlon, CITES Secretary-General.

China has the world’s largest CITES Management Authority and it established the National Interagency CITES Enforcement Collaborative Group in 2011 to better support coordinated enforcement efforts. Over the past three years, China has hosted international CITES meetings on saiga antelope (2010), controlled deliveries (2011), Asian snake trade (2011) and e-permitting systems (2012). Furthermore, it led the first cross-continent enforcement effort known as Operation Cobra (2013). China has also organized a CITES enforcement training course for countries from Africa (2012), a technical consultation meeting between China and ASEAN (2012) and an enforcement training seminar for Mongolian customs and policy (2012). A staff member of the General Administration of Customs will be seconded to the Lusaka Agreement Task Force in 2013 to assist with the enforcement of CITES in Africa. With regard to the provision of capacity building training materials, CITES presentations and three training courses available through the CITES Virtual College will be translated into Chinese before this September.

China advised the CITES Secretariat in June, 2013 that, while it opposed the inclusion of the 5 new shark species in the CITES Appendices at CoP16 and continues to have concerns regarding implementation, in the spirit of international cooperation under CITES, with full respect for the decisions adopted at CoP16, China will apply the CITES rules to the listed species. Hence it did not enter any reservations.

Mr Scanlon also met with the Vice Administrator of the General Administration of Customs, the Vice Minister of the State Forest Administration, and senior officials from the Ministry Foreign Affairs in Beijing as a part of his mission.