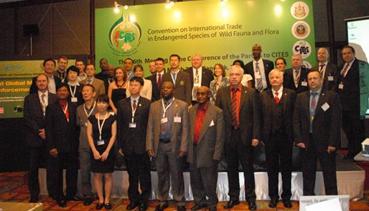 The International Consortium on Combating Wildlife Crime (ICCWC) convened the world's Wildlife Enforcement Networks for the first time in the margins of the Conference of the Parties to the Convention on International Trade in Endangered Species of Wild Fauna and Flora (CITES) in March 2013 in Bangkok, Thailand.

The First Global Meeting of the Wildlife Enforcement Networks (WENs), which brought together 131 participants from around the world, enabled wildlife law enforcement officers and WEN representatives to share their experiences at combating wildlife crime and to discuss ways of further enhancing cooperation to respond to the serious threat posed by transnational organized crime groups involved in wildlife crime.

All existing networks – including those that have been recently established and those under consideration - participated in the event. A number of interested countries, intergovernmental organizations and civil society organizations also attended the event.

During the meeting participants reaffirmed the need to work together and suggested increased interaction amongst WEN’s to form a ‘network of the wildlife enforcement networks’, which could promote communication and cooperation links amongst them at the regional, sub-regional and global level. Participants agreed that a formal structure for such a network was not necessary, and that it should encourage the use of existing tools and services provided by the international community, such as the secure communication channels, services and other tools that are available through ICCWC partner agencies.

To support the formulation of a ‘network of the wildlife enforcement networks’, ICCWC was encouraged to facilitate increased interaction amongst WEN’s, to provide them with further opportunities to strengthen relationships, standardize practices and to cooperate on an international level. The full report can be found here.

‘The meeting was an important step to explore how WEN’s could interact more effectively to combat transnational organized wildlife and forest crime and how ICCWC could assist them’, said Mr Scanlon, Secretary-General of the CITES Secretariat, on behalf ICCWC. ‘Following those discussions, ICCWC partners are currently developing a strategy to continue to provide support to the networks to increase communication and coordination amongst them.

The meeting was hosted by ICCWC, a collaborative effort by the CITES Secretariat, INTERPOL, the United Nations Office on Drugs and Crime (UNODC), the World Bank and the World Customs Organization (WCO) to strengthen international cooperation to combat wildlife and forest crime. It was made possible thanks to the generous financial support of the United States of America, through their Department of State.

The launch of the report follows the Executive Order on Combating Wildlife Trafficking issued by the President of the United States, Barack Obama, on 1 July 2013, which establishes a Presidential Task Force on Wildlife Trafficking to ensure wildlife crime is treated as seriously as narcotics and arms trafficking.

The Fact Sheet on U.S. Efforts to Combat Wildlife Trafficking highlights the United States is working with ICCWC and other interested partners to support the creation of a global network of regional and national WENs to improve communication and strengthen response actions across enforcement agencies globally.