CITES Secretary-General's presentation on Corruption and illegal trade in wildlife at the 6th Session of the Conference of the Parties to the UN Convention Against Corruption - Saint Petersburg, Russia

Corruption and illegal trade in wildlife

‘Addressing the Nexus Between Illegal Wildlife and Forestry Trade and Corruption’

Corruption is “an insidious plague” that is present in the wildlife sector just as it is in other sectors, indeed in virtually any form of human activity.

A clear message of the determination of the international community to work to prevent and combat corruption was sent with the adoption by the United Nations General Assembly (UNGA) of the UN Convention Against Corruption in 2003 and its entry into force in 2005.

In the case of illegal trade in wildlife, corruption is often an integral component – and the impacts of this corruption are not only affecting people, our institutions, and quality of life, but they are also driving certain species of wild animals and plants to extinction, including some of the world’s most charismatic species such as elephants and rhinos. 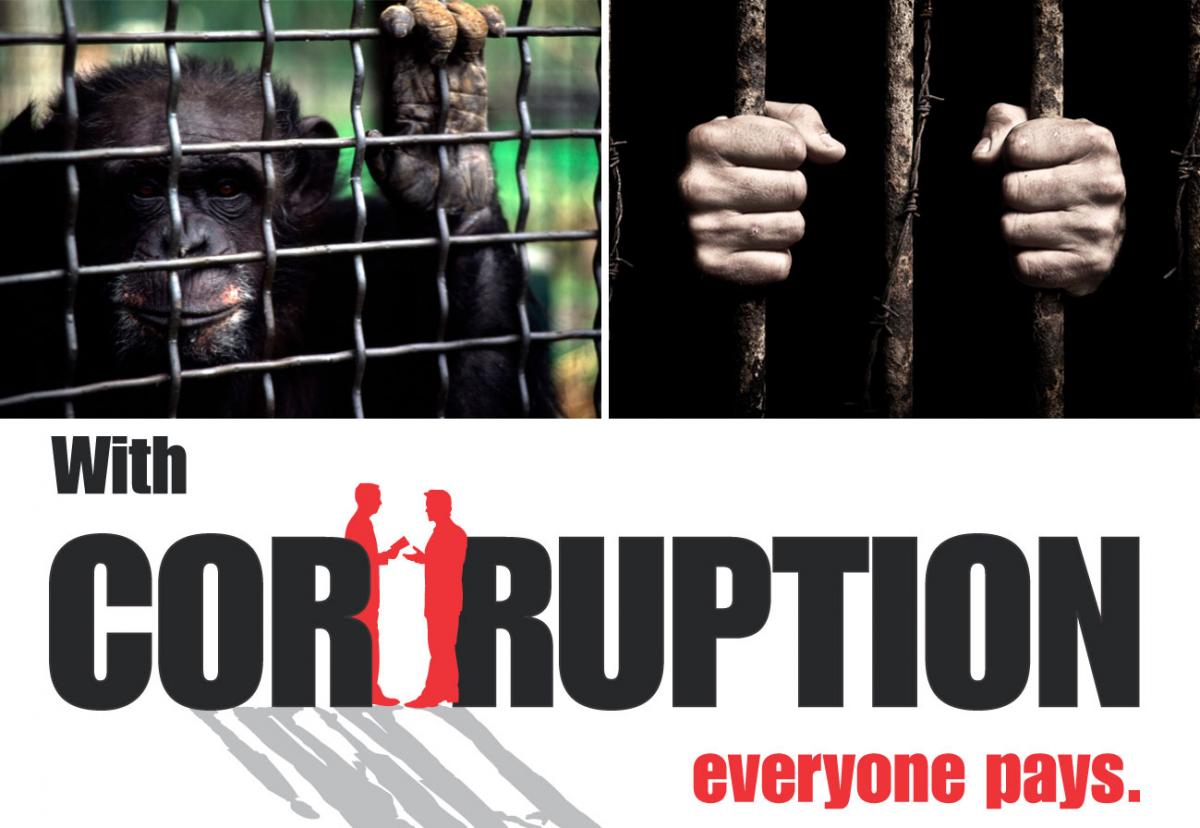 The Convention regulates commercial and non-commercial international trade in over 35,000 species of animals and plants, including their parts and derivatives, which often find their way into medicines, food, building materials, cosmetics, clothes, furniture and many other commodities.

For certain species, commercial international trade in wild taken specimens is prohibited. These species are included in Appendix I of the Convention and they are categorized as threatened with extinction. This prohibition, for example, includes commercial trade in elephant ivory, rhino horn, great apes, marine turtles and tigers.

For other species commercial international trade is subject to strict regulation to be sure it is legal, sustainable and traceable. These species are included in Appendix II of the Convention and they are categorized as not yet necessarily threatened with extinction but they could become so if trade is not strictly regulated. This regulated legal trade includes commercial trade in approximately 96% of CITES-listed animal and plant species, such as crocodile and python skins, the meat of the queen conch, the wool of the vicuña, and the bark of the African cherry tree.

When a State does decide to allow trade in a CITES Appendix II listed species the Convention sets out three requirements that must be met, namely the need to:

Consequently, illegal trade, or ‘illicit wildlife trafficking’, under CITES includes violating the prohibition against trading commercially in wild-taken specimens of Appendix I listed species , or trading commercially  in any specimens of Appendix II or III listed species without  obtaining, or following the conditions within, the necessary permits or certificates. The illegal possession of specimens illegally imported or otherwise acquired is also included.3

The text of CITES itself does not expressly mention corruption, but the need to fight corruption in combating illegal trade in wildlife has been acknowledged in many ways, including by a CITES Resolution on compliance and enforcement, in which the Conference of the Parties to CITES recommended that “Parties that are not yet signatories to, or have not yet ratified, the UN Convention on Transnational Organized Crime and the UN Convention Against Corruption consider doing so”.4

Recent high-level political recognition of the links between corruption and illegal trade in wildlife was captured in the first dedicated UNGA resolution on Tackling Illicit Trafficking in Wildlife5, adopted in July, which “Calls upon Member States to prohibit, prevent and counter any form of corruption that facilitates illicit trafficking in wildlife and wildlife products.” This ground breaking resolution also notes the important role of CITES and the UN Conventions against Transnational Organized Crime and Corruption, reinforcing the synergies between these three legally binding instruments.

In 2012, the CITES Secretariat contributed to a UNODC publication on the environmental impacts of corruption titled Corruption, Environment and the United Nations Convention against Corruption and today’s event presents a very important opportunity to specifically focus on wildlife. In fact, today’s event is the first time in the history of the UN Convention Against Corruption that a high-level event has been convened to specifically address corruption and illegal trade in wildlife. And for that I would like to extend our sincere gratitude to UNODC Executive Director Yury Fedotov, who has championed this cause since we first met here in Saint Petersburg at the Global Tiger Summit in 2010.

How then does corruption manifest itself under CITES?  Effective application of the Convention depends largely on control over the issuance, inspection and acceptance of CITES documentation, as well as detecting wildlife in illegal trade. Within the world of CITES we have witnessed corruption in many different forms – including through the offering, seeking and accepting of bribes in many forms, the making of false claims of captive breeding, and the direct involvement of officials in the theft of, and trade in, wildlife, including by corrupted rangers and military personnel.7

Although the vast majority of officials responsible for CITES implementation and enforcement are honest, committed to their task and working diligently each day to ensure that international trade is legal, sustainable and traceable, reports of corrupt activities that severely undermine the effective implementation of the Convention are increasingly of concern.

In one recent example, the former wildlife director and head of the CITES Management Authority of Guinea was arrested in August of this year for his suspected role in corrupt and fraudulent actions in the issuance of CITES export permits.  This was also a case where the national enforcement authorities worked very closely with the non-government sector, and most notably the EAGLE Network. Groups such as these, and others, can play an important role in the prevention of, and fight against, corruption and in raising public awareness about the causes and gravity of the threats posed by corruption, which is also recognized by Article 13 of the UN Convention Against Corruption.

In the wildlife sector, individuals and groups from outside the public sector actively participate in the fight against corruption and the need to legally protect people who report corruption is recognized under Article 33 of the UN Convention and needs to be implemented.

Distinguished Delegates, CITES is a binding legal instrument that imposes obligations on Parties to put into place the necessary legislative framework to implement the Convention. This legislative framework provides a fundamental basis for identifying and criminalizing corruption as it affects illegal trade in wildlife.

A number of CITES listed species are however high-value items targeted by organized crime groups, and this makes the officers responsible for regulating trade in these specimens vulnerable to attempts made to  corrupt them. And illegal trade in wildlife can often be associated with a combination of other well-established general crimes such as fraud, counterfeiting, use of dangerous weapons, assault, conspiracy, bribery, money-laundering and other forms of corruption.

Guidance provided to Parties under the CITES National Legislation Project for many years now encourages Parties to consider holding government officials responsible for violations of the Convention or relevant national law. In particular, it is suggested that Parties consider making it an offence for an enforcement officer to accept any unauthorized personal payment or other form of personal compensation. Parties are also encouraged to provide incentives in their legislation for individuals to come forward with information about suspected crimes.

Organized crime groups involved in illegal trade in wildlife corrupt officials, they undermine any effort to build up the rule of law and good governance, and they deprive local communities of the opportunity to  pursue their own legitimate development opportunities.

The impacts of illegal trade in wildlife are deep and multifaceted8 and the fight against it is inextricably linked to the fight against corruption. And CITES cannot operate in isolation from the wider system – it is and must be an integral part of it.

International and national anti-corruption laws, institutions and efforts have the scope to address violations linked to illegal trade in wildlife. It is therefore crucial to ensure that combating corruption as it affects trade in wildlife and CITES implementation is built into other relevant conventions, national laws, institutions and programmes, which is why today’s event is so important.

The impact that overall anti-corruption measures can have on combating illegal trade in wildlife is evident from the on-going impact of the Chinese Government’s far-reaching campaign against corruption on the demand for, and illegal trade in, wildlife and their products. The anti-corruption and anti-extravagance campaign, while not specifically targeting illegal wildlife trade, has played a significant role in reducing the demand for illegal wildlife products. For example, ivory carvings and ivory tusks, among others, have often been used as gifts for bribery in China and this national campaign is clearly serving to drive down demand for illegally traded ivory.

The UNGA Resolution, as well as the Crime Congress Doha Declaration10, decisions taken under CITES and the UN Commission on Crime Prevention and Criminal Justice, amongst others, have all highlighted the synergies between CITES and both UN Conventions Against Transnational Organized Crime and Corruption.

In November 2010, right here in the City of St Petersburg, five intergovernmental agencies – the CITES Secretariat, INTERPOL, the United Nations Office on Drugs and Crime (UNODC), the World Bank and the World Customs Organization (WCO) – concluded a Letter of Understanding establishing the International Consortium on Combating Wildlife Crime (ICCWC).

United under the banner of ICCWC, these organizations form a unique pool of thematically relevant technical and programming expertise, providing a novel approach to the multi-faceted challenges posed by illegal trade in wildlife and the founding Letter of Understanding noted “the involvement of organized crime, and sophisticated techniques and structures, in the illegal harvesting, smuggling and subsequent unlawful sale of wildlife and wildlife products, and that the association of general crimes such as conspiracy, fraud, counterfeiting, money-laundering, racketeering, violence and corruption are regularly encountered by wildlife law enforcement officers” and it is supporting national and regional efforts to scale up the law enforcement response.

But law enforcement efforts alone will not be sufficient to end corruption in the wildlife sector. Continued work is needed on building and maintaining properly paid, trained and equipped civil services, including park rangers, which requires interaction with a range of other entities, as well as enhanced  work on the linkages between illegal trade in wildlife, corruption, and the recently adopted SDGs.

Dedicated efforts must be made to mitigate the risks of corruption in the trade chain, also as it relates to trade in CITES listed species. We must ensure that adequate integrity policies and procedures are in place in national government structures, to prevent organized crime groups from corrupting officials.

Other novel approaches must also be taken, such as through the growing use of CITES electronic permitting and other information technologies, which make it more difficult to engage in corruption and more easy to detect corrupt practices – which can be seen as providing a better firewall against corruption. The global roll out of electronic permitting needs to be, and is being, further accelerated.

Distinguished delegates, combating illicit trafficking of wildlife is inextricably linked to the fight against corruption.

Today’s event has reinforced the synergies between the principal global legal instruments for tackling both issues – and we extend our sincere thanks to the Executive Director of UNODC and his team for bringing us all together today at this high-level event to advance our collective efforts.

[1] See: Foreword to the UN Convention Against Corruption

[3] For more see: 'CITES and wildlife trade – how CITES works and what it is and isn’t’

[8] These impacts include the:

[9] See: Heads of UNODC and CITES urge wildlife and forest offences to be treated as serious transnational organized crimes

[10] See: Calls for wildlife and forest crime to be treated as serious crime