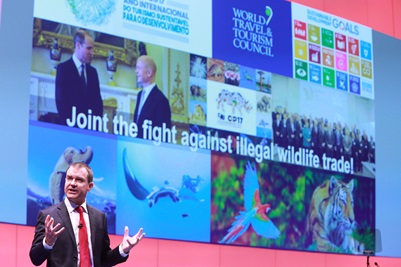 After serving for eight years as Secretary-General of the CITES Secretariat (and three years with the UN Environment Programme in Nairobi prior to that) I will soon be completing my mandate with the Convention and taking up my next career challenge.

It has been an honour and a pleasure to serve CITES and the UN. Over the past eight years we have grown the number of Parties from 175 to 183 and significantly increased our national implementation support, as well as the level of political attention, public profile, funding, partnerships and outreach of CITES.

We have made extraordinary strides in the fight against illegal wildlife trade, including through the International Consortium on Combating Wildlife Crime, and we are seeing tangible results from our collective efforts. Amongst many other successes, one can name; bringing more marine and timber species under CITES, new initiatives with the technology, tourism and transport sectors, reaching out to rural communities and the youth, and 3 March being declared as UN World Wildlife Day.

We have a highly capable Secretariat team in place that enjoys the confidence of CITES Parties and its many partners. I am proud to be leaving the Convention and its Secretariat in a very strong position.

My final day in the office will be 6 April 2018. Closer to my departure date I will extend my personal thanks to CITES Parties and Committees, partners and Secretariat staff, and will offer some reflections on my tenure as Secretary-General.

From 9 April, I will take on a new role as Special Envoy for African Parks. African Parks takes on direct responsibility for the rehabilitation and long-term management of protected areas in partnership with governments and local communities, through a unique and highly effective public-private partnership. It recently announced HRH Prince Henry of Wales (Prince Harry) as its President and I look forward to joining the team and helping to grow its outreach, partnerships and portfolio, and to be a voice for wildlife more generally.

Until then, I remain fully committed to my role as CITES Secretary-General.

How will the next Secretary-General of CITES be appointed?

Since mid-January, I have been working very closely with the Executive Director of the UN Environment Programme, his Chief of Staff, and the Chair of the CITES Standing Committee in ensuring a smooth transition to my successor.

We are working together to ensure the recruitment process is conducted expeditiously and in a way that respects UN personnel rules and the Memorandum of Understanding (MoU) between the CITES Standing Committee and the Executive Director, which was agreed to and signed in 2011. Here is a very brief overview of the recruitment process.

The Executive Director will conduct the recruitment process in accordance with UN personnel rules, which will include advertising the position and establishing an assessment panel to interview short listed candidates and recommend suitably qualified candidates to the UN Secretary-General.

The Executive Director will also follow the procedures set out in the MoU, in particular clauses 8-10. Through the MoU, the Executive Director “recognises the legal autonomy of the Convention in relation to UNEP and the role and function of the Secretariat to serve the interests of the Convention and its Parties”. In turn, the Standing Committee acknowledges that “the relevant rules and regulations of the United Nations and UNEP apply to the operation of the secretariat”.

The Executive Director has, through the MoU, agreed to:

The CITES Secretariat and the UN Environment Programme will publish the advertisement for the post of CITES Secretary-General on their respective websites.

Current and former Secretary-Generals of the CITES Secretariat