Annual Meeting of the New Champions 2017 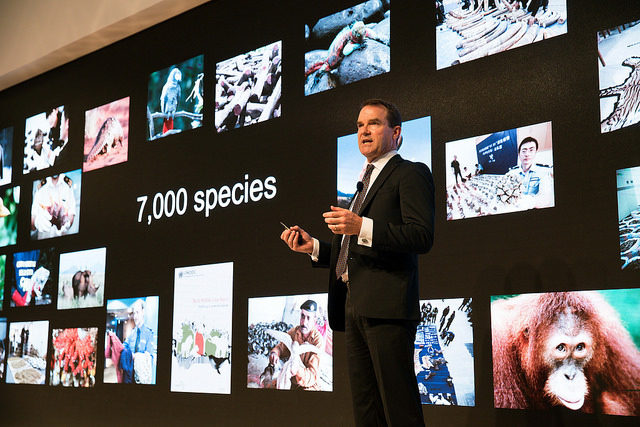 Over recent years we have been experiencing a surge in illegal trade in wildlife.

This illegal trade in wildlife is estimated to be worth up to USD 20 billion a year, excluding fisheries and timber, ranking it amongst other serious crimes, such as illicit trafficking in arms, narcotics and humans.

It is being driven by transnational organised criminal gangs and in some cases rebel militia. They have targeted high value wildlife and are poaching and smuggling at an industrial scale, which is decimating wildlife populations.

These criminals are targeting wildlife because there is a demand for various wildlife products and they have been able to make high profits at a relatively low risk. This profit to risk equation is thankfully changing, and changing fast, through the adoption of stronger laws and better enforcement, demand reduction strategies, engaging with local communities and the private sector, and through the deployment of modern technology.

There are international rules governing wildlife trade that are set by CITES, an international legally binding agreement adopted in Washington DC in 1973. CITES sets the rules that the criminals try and evade.

The first ever UN World Wildlife Crime Report released last year estimates products derived from over 7,000 species of wild animals and plants are being illegally traded, across all regions. It affects products derived from animals and plants that cannot be traded commercially under CITES rules, such as elephant ivory, rhino horn and tiger parts. It also affects animals and plants that can be legally traded under CITES strict trade rules, such as python skins, corals, and rosewood timber, but where people do not first obtain the permits to certify legality and sustainability.

These criminal groups are not just decimating wildlife – they are destroying the wildlife assets that can support sustainable development. They are also corrupting local officials, recruiting and arming local poachers, injuring and killing rangers and creating instability. They are depriving local communities of the ability to develop their own natural resources, such as for wildlife based tourism or to benefit from legal trade in certain wildlife products that can be sustainably used for food, fashion and medicine, which can lift communities from poverty. Rather this illegal trade is putting whole communities into a poverty spiral.

Let me share a few examples with you to give a sense of the scale of this illegal trade involving transnational organized criminal gangs:

I could go on but I think you get the picture. Some of our most magnificent wildlife is facing extinction at the hands of transnational criminals who are stealing wildlife from local communities and countries at industrial scale, with no regard for wildlife or people.

But how do you stop them? It is not easy – in fact it is really hard. We need a collective effort to tackle demand and supply. We must work across the entire illegal wildlife chain, and we need to bring on board the agencies at international and national level that are mandated, trained and resourced to deal with transnational crimes.

This is exactly what we are doing at the international level through the International Consortium on Combating Wildlife Crime (ICCWC). INTERPOL, the UN Office on Drugs and Crime and the World Customs Organisation have joined this fight and are deploying the same tools and techniques used to combat other serious international crimes in the fight against wildlife crimes.

Yet even with all of the enforcement agencies on board and the many other measures underway we will not succeed unless we also have local communities and the private sector with us as well.

Every year there are over 500 million shipping containers moving across the globe and there are 1.2 billion tourist arrivals, and every day there are 100,000 flights taking off. Modern transport allows us to move products to the four corners of the earth – whether illegally or legally sourced.

Regrettably, transnational criminal gangs are using legitimate forms of air, land and sea transport to covertly transport their contraband. Thanks to an extraordinary initiative of HRH the Duke of Cambridge we are working with the private carriers, airlines, couriers and shipping companies and others. Through signing a declaration known as The Buckingham Palace Declaration they are committing to helping combat these serious crimes – through adopting a zero tolerance policy, informing and educating staff and customers, and serving as eyes and ears for customs and police.

Well over 50 companies and organisations have now signed up to this Declaration, including Emirates Airlines, with the cause being personally championed by its President Sir Tim Clark.

Wildlife based tourism relies upon nature’s assets – the wild animals and plants. Experience has shown that the best way to maintain these assets is to actively engage with local communities, generate local employment and wealth. By doing so they will be the best protectors of wildlife. I witnessed this for myself during a recent trip to the Northern Rangelands Trust in Kenya.

And, Ladies and Gentlemen, if we are too win this fight we must deploy best modern technology.

The challenges for officials of knowing where wildlife, rangers and poachers are across vast landscapes and seascapes, for Customs in clearing hundreds of millions of containers, travelers and packages, for prosecutors in securing convictions, and for inspectors in monitoring multiple on-ground and on-line wildlife markets is massive. The sheer scale of the exercise is daunting. Knowing where to deploy limited enforcement resources is a huge challenge and finding contraband can be like trying to find a needle in a haystack.

Customs, police and rangers all need good intelligence on where to be and what to look for and prosecutors need hard evidence to secure convictions.

If deployed well, modern technology can and will be a game changer. It does, however, first require well trained and remunerated officials, including rangers, customs and police, who are able to use such technologies to support their enforcement efforts.

There are many technologies that are available or in development. It’s not for me to support particular products, but I can share examples of where technology is being deployed to help fight wildlife crime. If you look at this slide you will see pictures drones for aerial surveillance, scanners for shipping containers, old mobile phones for listening to the forest, and best of all, natures technology, the dog and its amazing sense of smell. More specifically:

And much of this technology has multiple applications, in particular for addressing wider personal security concerns.

But many of these technologies are still raw or in their infancy. There is much more that can be done. We are encouraging further investment into new technologies, including through an Impact Investment Fund. We have even drawn up what such a Fund might look like!

Ladies and gentleman, today, we reach out to you, as business people, investors and entrepreneurs to join us in the fight against illegal trade in wildlife. It is the right thing to do - and if you have kids, they will love you for it! Your efforts will not only help protect our most precious wildlife but may also realize a commercial return.

For the fashion, food, furniture, musical instrument and pharmaceutical industries you will be protecting your own legal supply chain of raw materials. For the travel and tourism sector you are protecting the very assets that underpin wildlife based tourism. For the transport sector you are enhancing your brand and protecting your staff and customers from the threat of injury and disease. For the technology sector and investors you can commercialize new technologies that will save wildlife and people, as well as realize a good return.

We need ‘all hands on deck’ if we are to win this fight and be sure our planet’s magnificent wild animals and plants can survive in the wild, both for its own sake and to support the world’s efforts to achieve Agenda 2030 and the Sustainable Development Goals. You all have a critical role to play in this collective endeavor.

Please join us in this fight!

You can also watch it here on the website of the World Economic Forum and the live interview on Facebook.