CITES Secretary-General's remarks at the side event on Addressing Corruption Linked to Wildlife, Forest and Fisheries Crime, Vienna, Austria

The elephant in the room
Addressing Corruption Linked to Wildlife, Forest and Fisheries Crime

It is great to be here in Vienna for this joint side event, which follows on from the Special High-Level Event held on the same topic in 2015 in Saint Petersburg at the 6th Session of the Conference of the Parties to the UN Convention Against Corruption1.

Special thanks to Executive Director Yury Fedotov and his good team for their extraordinary support for CITES and the fight against illegal wildlife trade. I first met Executive Director Fedotov in Saint Petersburg in 2010 at the Global Tiger Summit, where he signed up to the International Consortium on Combating Wildlife Crime and he has been a strong and steadfast supporter ever since.  Thank you Yury. 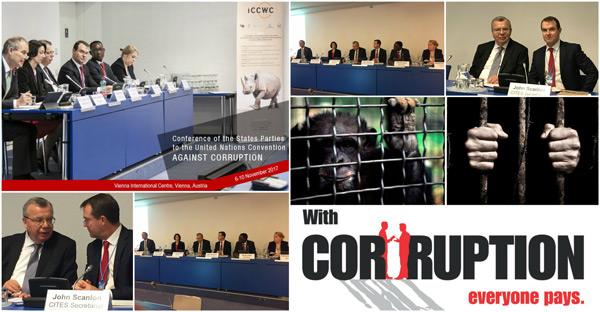 Over the past decade the world has been confronted by a surge in illegal wildlife trade. This highly destructive illicit trade is not only decimating wildlife populations but is seriously hindering development, frustrating efforts to eradicate poverty, and creating instability. As was shown in the first UN World Wildlife Crime Report, wildlife crime is well organised and transnational. It affects over 7,000 species of wild animals and plants and happens across every region of the world.

Transnational organized crime groups have targeted high value species without regard for wildlife or people’s lives as they have seen it as a high profit low risk crime, but due to the collective efforts that are underway this is rapidly changing. In the process of wiping out wildlife, these criminals are corrupting local officials right across the illegal supply chain, recruiting and arming local poachers, creating insecurity and propelling local communities into a poverty spiral. They are involved in money-laundering, tax evasion and fraud. They are hard to beat but they must be stopped.

The fight against wildlife crime cannot be won by wildlife agencies alone.  It needs the direct involvement of the international and national agencies that have the mandate, expertise and resources to combat organised crime and corruption, and that is exactly what is happening and why we are so delighted to be here today.

We cannot win this fight without you!

Reflecting a heightened level of political concern over the devastating impacts of poaching and trafficking in wildlife on both wildlife and people, in 2015 the United Nations General Assembly (UNGA) unanimously adopted the first ever dedicated Resolution on Tackling Illicit Trafficking in Wildlife.

Several similar Resolutions have since been adopted, most recently in September of this year when the UNGA adopted a further powerful Resolution on Tackling illicit trafficking in wildlife, which reinforces the need to focus on key areas in the fight against wildlife crime, including enhanced national legislation, supporting sustainable livelihoods, stronger law enforcement, countering corruption, deploying information technologies and undertaking well-targeted demand reduction efforts.

The Resolution encourages States to treat wildlife crime as a serious offence where transnational organized criminal groups are involved, which is something the Executive Director Fedotov and I have been promoting, together with our ICCWC partners, for many years.

In particular, the Resolution calls upon Member States to prohibit, prevent and counter any form of corruption that facilitates wildlife crime2 and to implement all relevant resolutions and decisions adopted at the 17th meeting of the Conference of the Parties to CITES (CITES CoP17) held in Johannesburg, South Africa, and requests UNODC to continue to support Member States in this regard3.

The level of political concern over the scale and impacts of illegal wildlife trade, is also reflected in the UN Sustainable Development Goals (SDGs) that were adopted in 2015, which in Goal 15.7 (Life on land) make specific reference to the need to take urgent action to end poaching and trafficking of protected species of flora and fauna. This target will not be met if we cannot counter corruption.

It is well known that corruption harms people, undermines the rule of law, institutions and sustainable development. By enabling wildlife crime, corruption is driving species of wild animals and plants to extinction.  Put bluntly, corruption is killing wildlife and impoverishing communities.

The vast majority of officials are honest and committed. We salute them. Yet, we also see customs and police officials bribed, logging and hunting licences forged, and poachers and wildlife traffickers set free due to obstructed prosecutions. We must root out the “bad apples” and deepen efforts to build and maintain properly paid, trained and equipped civil servants.

We cannot afford to turn a blind eye to this serious challenge. We have no option but to confront corruption head-on by fully deploying the international agreements created to combat corruption and to regulate wildlife trade in a coherent manner.

This need is highlighted by a number of incidents that occurred in recent months. In March 2017, for example, two police officers and a state prosecutor in Thailand were placed on inactive duty to ensure an unhindered investigation into their alleged links with rhinoceros horn smugglers4. In Mozambique at least five Mozambican police officers and two customs officers that worked at Maputo International Airport are facing both disciplinary action and criminal charges in connection with their alleged role in the smuggling of rhinoceros horns that were seized in Malaysia5. While these incidents are unfortunate, it is encouraging that, in both these cases, authorities actively responded to the incidents to root out corruption.

Among other things, this Resolution:

Corruption is also addressed in the UN World Wildlife Crime Report, published by UNODC, with support from ICCWC, in 2016. According to this report, nationals from more than 140 nations are implicated in this illicit trade. It highlights that certain forms of wildlife crime, such as the international illicit trade in rhino horn, would not be possible without corruption.

We are not standing idle, we are fighting back against wildlife crime and corruption. In 2010 we created the International Consortium on Combating Wildlife Crime, known as ICCWC, a consortium of the CITES Secretariat, INTERPOL, UNODC, The World Bank and the World Customs Organisation to provide coordinated support at national and regional levels to the fight against wildlife crime.

This Consortium is today fully operational and is delivering well-targeted support to countries on how to deploy the same tools and techniques used to combat other serious crimes, such as on anti-money laundering, the use of controlled deliveries, modern forensics and investigation techniques, and is currently developing anti-corruption guidelines.

Through the ICCWC Strategic Programme for 2016-2020, the Consortium identifies a number of activities that will be delivered to support the implementation of national anti-corruption measures and strategies and deliver programmes to combat corruption associated with wildlife crime.

In fact, UNODC is, as we speak, under the auspices of ICCWC and in accordance with a Decision agreed at CITES CoP17, developing anti-corruption guidelines that could be used to promote adequate integrity policies, and assist member States to mitigate the risks of corruption in the trade chain as it relates to CITES-listed specimens.

We are most grateful to our donors for supporting the work of ICCWC, and we will soon announce some major new funding to enable it to do a lot more.

Distinguished colleagues, as will be apparent from these remarks, CITES is not looking to set up some parallel universe to address wildlife crime and corruption. Rather, all of the efforts under CITES are directed towards working within the exiting legal framework and at embedding the issue of wildlife crime into it. Central to this work is the ratification and implementation of the UNCAC, the UN Convention created to address corruption, which has been recognized by the UNGA and CITES Parties. Effective implementation means fully using the Convention’s tools to prevent corruption, and prosecute and punish offenders.

We all recognise that further well-targeted activities and efforts must be made to combat corruption if we are to protect wildlife from illicit trade.

Cooperation between the UNCAC and the CITES is at an all-time high and we are working extremely well together to integrate the tools to prevent corruption, and to facilitate the prosecution and punishment of offenders developed through the UNCAC and UNTOC, with the international rules set for trade in wildlife by CITES.

Within the UN, and wider international system, I can think of no better collective endeavour to achieve a common objective than what we are seeing underway through CITES, UNODC and ICCWC to jointly fight wildlife crime and corruption. And we are making headway, with elephant poaching in 2016, while still too high, being down for the fifth consecutive year.

There is a lot more to do but there is reason for optimism. We are on the right track and we are making progress in fighting the corruption and transnational criminals who are driving this industrial scale and highly destructive illicit trade.

- 7th session of the Conference of the States Parties to the United Nations Convention against Corruption, Remarks to Plenary Session by John E. Scanlon

2 Including by assessing and mitigating corruption risks in their technical assistance and capacity-building programmes related to wildlife, by strengthening their capacity to investigate and by prosecuting such corruption.