‘Air cargo and the fight against illegal wildlife trade’

It is a great honour to be invited to the World Cargo Symposium and I would like to extend my sincere thanks to the International Air Transport Association (IATA) for giving me this unique opportunity to address you for the first time. Today’s address compliments the keynote address I made to the IATA Annual General Meeting and World Air Transport Summit in Miami back in 2015.

There have been many significant developments since I addressed the IATA AGM three years ago. At that time, we also signed the first ever MoU between CITES and IATA, which addresses both legal wildlife trade and combating illegal trade in wildlife.
In particular, over the past three years we have appreciated the very active engagement of IATA, its members and transport sector more generally in the fight against illegal wildlife trade, as I will further explain later. In fact, our relationship with IATA and its members has never been stronger than it is today.
For many of you this may, however, be your first exposure to the threats posed by illegal wildlife trade, so I would like to spend a few moments outlining the scale of the challenge, the measures that are underway to meet them, especially by the transport sector, and what we seek from you.

Before doing so, it is important to first note that a significant amount of wildlife and wildlife products are legitimately traded each year under CITES trade rules. In fact, CITES records about one million trade transactions each year, which are all fed into our CITES publicly accessible trade data base. Many of these are transported by air and we have enjoyed a longstanding and beneficial relationship with IATA in regulating legal trade in wildlife – especially in relation to CITES requirements for the transport of live animals and plants. I will speak about this aspect of our relationship tomorrow at the session dedicated to this topic.
However, today I am here to talk about the devastating economic, social and environmental impacts of illegal trade in wildlife – being wildlife that is traded in contravention of CITES rules, how air transport is being used by criminals to transport their contraband and how the air transport sector is increasingly engaged in helping to combat this illegal trade.

What is CITES? CITES is a legally binding agreement between 183 Parties, 182 countries and the European Union, that sets the international rules for wildlife trade. It was adopted right here in the United States 45 years ago, on 3 March in Washington DC. The United States was also the first country to join the Convention.
The Convention regulates international trade in over 36,000 species of animals and plants, including their parts and derivatives, to ensure that international trade does not threaten their survival in the wild. The trade measures that are applied vary according to the biological status of the species.
International commercial trade in some wild caught specimens is prohibited under CITES – such as trade in elephant ivory, rhino horn, great apes, marine turtles and tigers.
International commercial trade in other specimens is allowed but it is strictly regulated under CITES through a permit system to avoid overexploitation – such as the legal trade in alligator and python skins – and we may see some people wearing alligator or python skin boots at the Gala Dinner on Wednesday, the meat of the queen conch, the fine fibre of the vicuña, and the bark of the African cherry tree. When well-regulated, this legal and sustainable trade in CITES-listed species can have benefits for both wildlife and people.

The first ever UN World Wildlife Crime Report estimates that over 7,000 species find their way into illegal trade. This illegal trade affects species that cannot be legally traded commercially under CITES rules, as well as species that can be traded but where the necessary valid permits are not first obtained.
Over recent years, we have been experiencing a surge in illegal trade in wildlife, especially as it affects elephants, rhinos, pangolins and some precious timber species. This illegal trade is not about local subsistence poaching. It is global in nature and is taking place at an industrial scale.
We are being confronted by transnational organized criminals, and in some cases rebel militia and rogue elements of the military. They are driving this industrial scale poaching and illegal trade destined for illicit markets – with the profits being used for all manner of criminal activities. They are extremely hard to beat, and we need the transport sector to help us with this fight.
The deep involvement of organized crime in illegal wildlife trade has been well recognized by the United Nations (UN), including through the World Wildlife Crime Report, and the partners to the International Consortium on Combating Wildlife Crime (ICCWC).
Considerable scaled-up collective efforts are well underway to combat wildlife crime and our efforts are delivering results. However, we still have a long way to go and it continues to be a major problem worldwide, estimated by some to be worth up to 20 billion dollars a year, which ranks it amongst other serious transnational crimes such as the trafficking in people and arms.
Let me share just a few examples to illustrate the scale of the illegal taking that feeds this illicit trade:
In overall terms, there are less than 24,000 rhinos left on the African continent, with another 3,000 in Asia (including just 200 Sumatran rhinos).  The last Javan rhino in Viet Nam was lost in 2011, and the last known rhino in Mozambique was lost in 2013, both to poachers – and the rangers at the Ol Pejeta Conservancy in Kenya are protecting the last surviving male northern white rhino on the planet.
Forest elephants in Central Africa declined by over 60% in ten years, there are about 7,000 cheetahs left in the wild, wild tigers only number around 4,000 and there are just 800 mountain gorillas left in the wild, which were featured in the brilliant documentary, Virunga.
To put these numbers into a human context, the AT&T Stadium, formerly the Cowboys Stadium, here in Texas has a capacity of up to 100,000 people – that is four times the number of rhinos left on the entire planet!
Colleagues, we are quite literally getting down to the wire with many of these species – we are confronting a crisis and if we do not continue to scale up our efforts they will be lost on our watch.

The impact of this illegal trade is not just on wildlife, it also poses a grave threat to people and their livelihoods – as well as national economies and in some cases national and regional security.
Brave rangers serving in the front lines are being killed and injured in the line of duty, officials are being corrupted, and local communities are being deprived of making their own development choices, including through the legitimate use of their wildlife resources.
Many countries rely upon wildlife-based tourism to generate significant national and local revenue and jobs – and in some countries it forms a major part of their GDP, such as in Kenya and South Africa.
Magnificent wildlife destinations are being plundered by poachers for the illicit trade, including UNESCO World Heritage Sites, such as the Selous Reserve in United Republic of Tanzania – which has been included on the World Heritage ‘in danger’ list due to the high levels of poaching along with another 13 sites across Africa.

We are fortunate to live in an interconnected world – something you know better than any audience.
There are today over:
Unfortunately, legitimate forms of transport are being exploited by transnational organized criminals and others to transport their contraband. As the IATA environment committee has noted, this can pose a safety risk to airline staff and passengers. It may also give rise to potential legal, reputational and financial risks.
Illegal rhino horn and pangolin scales are, for example, most often transported by air, and while raw illegal elephant ivory is being largely transported by sea, most illegally traded worked ivory appears to be transported by air. And if time permitted many more examples could be given.
Illegal trade in wildlife is of an industrial scale, but in the context of the overall volumes of air and sea transport, we are often searching for a ‘needle in a haystack’, with only a tiny fraction of the overall cargo or passengers carrying illegally traded wildlife.
This contraband will, however, travel vast distances and go though many hands on its way to illicit markets, meaning there are many points along the way where it can be disrupted. Our collective objective must be to maximize the risk of trading illegally by disrupting it at every step along the illegal supply chain and those involved with air cargo are an important part of this effort.

IATA member airlines and those responsible for cargo are not being asked to become de facto customs or enforcement agencies, which perform core functions of government.
But enforcement agencies cannot operate in isolation, they require access to good information from multiple sources and this is where the transport sector can and is playing a critical role.
You have tens of thousands of cargo staff working on the ground dealing every day with customers, cargo and passengers and you have a deep knowledge of your own cargo supply chains.
And you, as air transport cargo leaders, can help provide us with extra sets of eyes and ears on the ground – looking, listening and passing on information of anything that looks suspicious to relevant authorities –providing what Sir Tim Clark of Emirates has described as, “street intelligence.”
Related to this is ensuring that any legitimately traded wildlife adheres to IATA standards and CITES requirements, which I will address tomorrow.
The IATA CEO, the CEO of Emirates, the CEO of Kenya Airways, myself and other leaders have all been part of a Transport Task Force established by The Royal Foundation, under the patronage of HRH the Duke of Cambridge (Prince William) and chaired by Lord William Hague – a distinguished former UK Foreign Secretary. 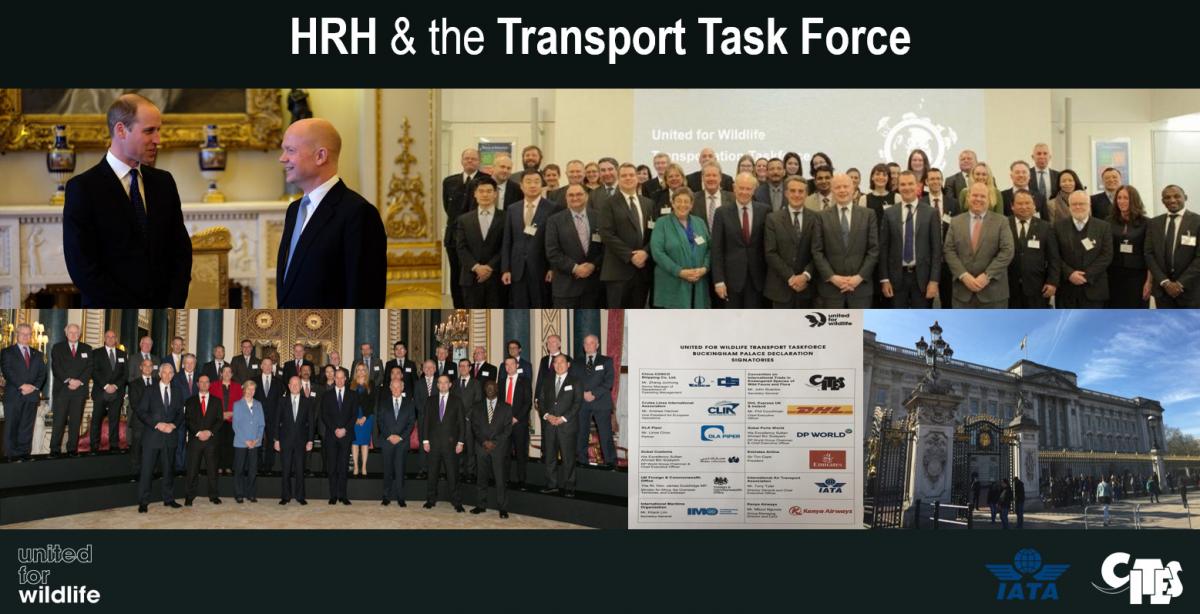 This inspired initiative by the Duke of Cambridge directly addresses how the transport sector can assist in combating illegal trade in wildlife and the work of the Task Force has resulted in the adoption of the Buckingham Palace Declaration in March 2016 on how the transport sector can assist in this fight.  We are delighted that IATA and many of its member airlines have signed up to the Declaration, which includes the following commitments:
Against this backdrop, the significantly enhanced collaborative efforts that are underway to combat this illegal trade across source, transit and destination countries, tackling both demand and supply, are having a real world impact.
For example, over the past five years we have seen progress made, most notably with elephant poaching falling in Africa for the past five years, but not yet fast enough or across all regions. We must persist in our collective endeavors if we are to succeed.
Today we reach out to everyone who is involved in air cargo supply chain to fully get behind this global effort in your daily work. The future of the world’s wildlife is in our hands and we need you with us if we are going to succeed - and if you have children they will also be proud of you if you do!
We offer you our full support in doing so, as is already reflected in the MoU between CITES and IATA, which commits our two organizations to work even more closely together in combating illegal trade in wildlife.
Thank you for the opportunity to address you today.