It is a great honour to be invited to your Annual General Meeting and I would like to extend my sincere thanks to the IATA member airlines, as well as Tony Tyler, for giving us this unique opportunity to address you for the first time - in a year that marks the 70th Anniversary of IATA and 40 years since CITES entered into force.

A significant amount of wildlife and wildlife products are legitimately traded each year under CITES. Many of these are transported by air and we have enjoyed a longstanding and beneficial relationship with IATA – especially in relation to CITES requirements for the transport of live animals and plants.

However, today I am here to talk about the devastating economic, social and environmental impacts of illegal trade in wildlife – being wildlife that is traded in contravention of CITES, how air transport is being used by criminals to transport their contraband and how the air transport sector can further engage in helping to combat this illegal trade.

CITES is a legally binding agreement between 181 State Parties, that sets the international rules for wildlife trade.

The Convention regulates international trade in over 35,000 species of animals and plants, including their parts and derivatives. The nature of the various trade measures utilized by CITES to regulate this trade depends primarily upon the biological status of the species.

International commercial trade in some wild caught specimens is prohibited under CITES – such as trade in elephant ivory, rhino horn, great apes, marine turtles and tigers.

International commercial trade in other specimens is allowed but it is strictly regulated under CITES through a permit system to avoid overexploitation – such as the legal trade in alligator and python skins, the meat of the queen conch, the wool of the vicuña, and the bark of the African cherry tree. This legal and sustainable trade can have benefits for both wildlife and people.

Over recent years, however, we have been experiencing a surge in illegal trade in wildlife, especially as it affects elephants, rhinos, pangolins and some precious timber species. This illegal trade is global in nature and is taking place at an industrial scale.

We are increasingly being confronted by transnational organized criminals, and in some cases rebel militia and rogue elements of the military. They are driving this industrial scale poaching and illegal trade destined for illicit markets – with the profits being used for all manner of criminal activities.

This dynamic has been well recognized by the United Nations (UN) Security Council, UN Crime Commission, and INTERPOL, as well as many others.

Considerable scaled-up collective efforts are underway to combat wildlife crime, yet it continues to be a major problem worldwide, estimated by some to be worth up to 20 billion dollars a year – ranking it amongst other serious transnational crimes such as the trafficking in people and arms.

Let me share just three examples to illustrate the scale of the illegal taking that feeds this illicit trade: 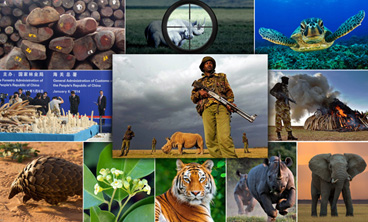 In overall terms, there are less than 24,000 rhinos left on the African continent, with another 3,000 in Asia (including just 200 Sumatran rhinos).  The last Javan rhino in Viet Nam was lost in 2011, and the last known rhino in Mozambique was lost in 2013, both to poachers – and the ranger in the photo you can see on the screen is protecting the last surviving male northern white rhino on the planet.

Forest elephants in Central Africa declined by over 60% in ten years, wild tigers only number 3,200, and there are just 800 mountain gorillas left in the wild, which were featured in the brilliant documentary, Virunga.

Distinguished delegates, we are quite literally getting down to the wire with many of these species – we are confronting a crisis and if we do not act immediately they will be lost on our watch.

But the impact of this illegal trade is not just on wildlife, it also poses a grave threat to people and their livelihoods – as well as national economies and in some cases national and regional security.

Brave rangers serving in the front lines are being killed and injured in the line of duty, officials are being corrupted, and local communities are being deprived of making their own development choices, including through the legitimate use of their wildlife resources.

Many countries rely upon wildlife-based tourism to generate significant national and local revenue and jobs – and in some countries it forms a major part of their GDP, such as in Kenya.

Magnificent wildlife destinations are being plundered by poachers for the illicit trade, including UNESCO World Heritage Sites that are being degraded across Africa, such as the Selous Reserve in United Republic of Tanzania – which has been included on the World Heritage ‘in danger’ list due to the high levels of poaching.

Against this backdrop, significantly enhanced collaborative efforts are underway to combat this illegal trade across source, transit and destination countries, tackling both demand and supply.

We are fortunate to live in an interconnected world – something you know better than any audience.

There are today over:

But legitimate forms of transport are being exploited by transnational organized criminals and others to transport their contraband. As your environment committee has noted, this can pose a safety risk to airline staff and passengers. It may also give rise to potential legal, reputational and financial risks.

Illegal rhino horn and pangolin scales are, for example, most often transported by air, and while raw illegal elephant ivory is being largely transported by sea, most illegally traded worked ivory appears to be transported by air. And if time permitted many more examples could be given.

Illegal trade in wildlife is of an industrial scale, but in the context of the overall volumes of air and sea transport, we are often searching for a ‘needle in a haystack’, with only a tiny fraction of the overall cargo or passengers carrying illegally traded wildlife.

This contraband will, however, travel vast distances and go though many hands on its way to illicit markets, meaning there are many points along the way where it can be disrupted. Our collective objective must be to maximize the risk of trading illegally by disrupting it at every step along the illegal supply chain.
-----
We are certainly not asking IATA member airlines to become de facto customs or enforcement agencies, which perform core functions of government.
But enforcement agencies cannot operate in isolation, they require access to good intelligence from multiple sources and this is where the transport sector can play a critical role.
Distinguished delegates, you have tens of thousands of staff in the field dealing every day with customers, cargo and passengers and you have a deep knowledge of your own cargo supply chains. Your e-freight initiative offers opportunities for closer collaboration with CITES to better secure legal trade in wildlife through reducing the fraudulent use of permits and in detecting illegal trade.
And if you, as CEOs and senior airline industry leaders, alert your staff to this issue and make it a priority of your company not to be used to carry any illegal wildlife or wildlife products, then your staff can be extra sets of eyes and ears on the ground – looking, listening and passing on information of anything that looks suspicious to relevant authorities – or providing what Sir Tim Clark of Emirates has described as, “street intelligence.”
Related to this is ensuring that any legitimately traded wildlife adheres to IATA standards and CITES requirements.
Your own IATA CEO, the CEO of Emirates, the CEO of Kenya Airways, myself and other leaders are all part of a Transport Task Force established by The Royal Foundation, under the patronage of HRH the Duke of Cambridge and chaired by William Hague – a distinguished former UK Foreign Secretary, to address how the transport sector can assist in combatting illegal trade in wildlife.

Second meeting of the Transport Task Force meeting, May 2015
The work of the Task Force will not be completed until later this year but we need to move fast and there are three clear areas in which we believe you could play a critical role, both individually and collectively, in supporting these efforts, namely to: 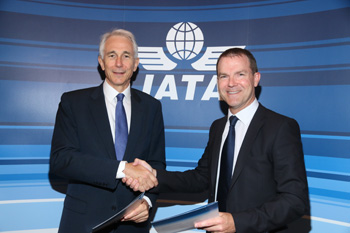 There is a global collective effort underway across countries, the UN, international and national organizations, philanthropic entities, and dedicated individuals to combat illegal trade in wildlife.

Today we reach out to all of you to join in this global effort and we offer our full support and that of our partners to assist you as necessary – and yesterday your CEO and I signed the first ever MoU between CITES and IATA, which commits our two organizations to work even more closely together.

Distinguished delegates, there are many issues on your agenda this week and some will no doubt give rise to differing opinions and lively debate. I hope that joining this global effort to put an end to this highly destructive illegal trade is an issue that can unite you.
Thank you.