CITES Secretary-General’s statement at the first ever crush of confiscated elephant ivory in China - Dongguan, China 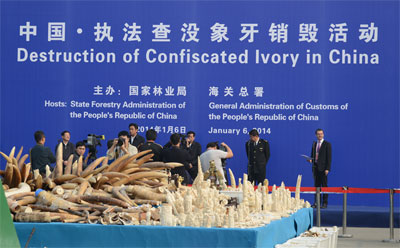 "Illegal trade in elephant ivory is having a devastating impact on the African
elephant, and it also poses a threat to people and their livelihoods - it must stop.

Despite considerable efforts to combat wildlife crime, it continues to be a problem worldwide.

There is strong evidence of the increased involvement of organized crime syndicates - and on some occasions rebel militia - in certain wildlife crimes that are operating through well-developed criminal networks.  This has changed the dynamics of combating this highly destructive criminal activity, in particular as it relates to the African elephant.
The latest figures released through the CITES programme Monitoring the Illegal Killing of Elephants (MIKE) show that we continue to face a critical situation with the poaching of the African elephant and smuggling of its ivory with an estimated 22,000 elephants illegally killed in 2012.
These latest MIKE figures, coupled with the data compiled from 42 MIKE sites across 27 African countries, demonstrate that current levels of elephant poaching in Africa remain far too high, and could soon lead to local extinctions if the present killing rates continue. The situation is particularly acute in Central Africa, where the estimated poaching rates are twice the continental average.
------
At the 16th meeting of the Conference of the Parties to the Convention on International Trade in Endangered Species of Wild Fauna and Flora (CITES CoP16), held in Bangkok in March, 2013, we witnessed unprecedented levels of international cooperation in addressing the threats posed to wildlife, to people and their livelihoods through poaching and smuggling, especially with respect to the African elephant.
At that meeting all Parties to CITES showed that they were prepared to work together in the interest of the African elephant. They spoke with one voice on the need to take decisive actions in stopping the alarming trends in poaching and smuggling. Parties recognized the need for targeted and time-bound actions to be undertaken along the entire illegal ivory trade chain - from African range States to transit nations and countries that are the final destinations and markets, and to tackle both supply and demand.
The CITES Standing Committee further reinforced the collective efforts taken by CITES Parties by agreeing with the eight key States in Africa and Asia that are part of the illegal ivory trade chain - being range, transit and destination States, such as China - on the preparation of national ivory action plans containing details of the urgent measures those States will undertake to combat illegal trade in ivory.
Further, both in the lead-up to CITES CoP16, and subsequently, we have seen political commitments made, often at the highest political level, to increase efforts to combat wildlife crime more effectively, and often with a focus on the illegal ivory trade. This has included commitments made at meetings convened in Rio de Janeiro, Washington D.C., Vienna, Marrakech, Bali, New York, Gaborone and Paris - with a high-level meeting to take place in London in February of this year.
------
Ladies and gentlemen, China is a vast country, with a huge population, a strong and growing economy, multiple international borders and high volumes of international trade.
China has the world’s largest CITES Management Authority and it established the National Interagency CITES Enforcement Collaborative Group in 2011 to better support coordinated enforcement efforts across the entire country. This Collaborative Group was awarded the Secretary-General’s Certificate of Commendation in 2012 for two successful national wildlife law enforcement operations conducted earlier in the same year, which resulted in significant seizures and arrests.
Not so long ago, in July 2013, I had the opportunity to meet with the 21 Branch offices of the Chinese Management Authority at a National CITES Retreat and Training session held in Jilin Province, to discuss the outcomes of CITES CoP16 and the enhanced efforts being taken to implement CITES in China, especially as it relates to trade in African elephant ivory. 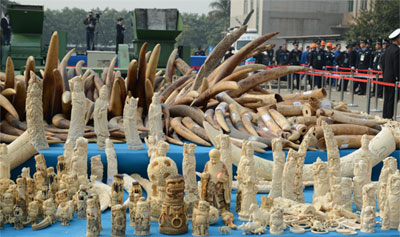 "If you do trade illegally in elephant ivory, you now run a much higher risk of being
arrested, prosecuted and severely punished - and the return on your ‘investment’ in
illegally traded ivory may end up being jail time, heavy fines, and seized assets.",
John E. Scanlon, CITES Secretary-General

China has prepared and is implementing its comprehensive National Ivory Action Plan, as agreed with the Standing Committee. The Plan has been shared with the Committee, which will discuss it and the other seven plans in July of this year.
Amongst other initiatives, China led the first cross-continent wildlife enforcement effort known as Operation Cobra, has agreed collaborative enforcement-related initiatives through the U.S.-China Strategic and Economic Dialogue, and most recently China (Hong Kong SAR) returned seized ivory and rhino horn to South Africa.  China has also provided funding to the African Elephant Fund and MIKE, and in-kind support to African range States, which we understand will be further enhanced over the coming year.
We are most encouraged that the measures being taken by China are designed not only to further strengthen its enforcement efforts domestically, but also to improve its collaboration with elephant range States, as well as with transit and other destination countries to stop the illegal trade in elephant ivory and other wildlife.
------
Ladies and gentlemen, through today’s public destruction of 6.2 tonnes of seized ivory, China, as a main destination country for illegal elephant ivory, is sending an unequivocal message - both domestically and internationally - that it will not tolerate this illegal trade.
Today’s message is strongly reinforced by the increased numbers of seizures, prosecutions and convictions in China – including the imposition of high monetary fines and custodial sentences on those who are convicted of illegally trading in elephant ivory, which we recently highlighted on our website.
------ 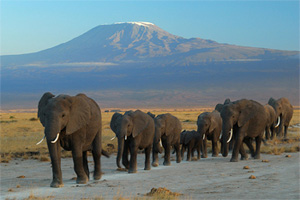 Ladies and gentlemen, what was recognized by all of the Parties to CITES at CoP16 last year is even more relevant today:  reversing the disturbing trends in elephant poaching and ivory smuggling requires a sustained collective effort.
And just ten months after the conclusion of CITES CoP16, we are seeing enhanced measures taken across range, transit and  destination States - such as in Kenya where new wildlife laws that impose significantly higher penalties for those involved in  wildlife crime have been assented to by President Kenyatta, and in Malaysia where the Department of Wildlife and National Parks  has filled 43 new posts for enforcement and prosecution.
Enhanced enforcement efforts are also being taken in other destination countries, such as in the United States of America  through President Obama’s 2013 Executive Order on Combating Wildlife Trafficking and the European Union has announced funding for a new programme that will build upon MIKE, known as Minimizing Illegal Killing of Endangered Species (or MIKES) to support anti-poaching efforts across Africa.
Several States have also provided funding to the International Consortium on Combatting Wildlife Crime (ICCWC) to support countries and regions with their enforcement efforts, including funding to strengthen the skills of law enforcement officers from across Africa and Asia to combat transnational organized wildlife crime more effectively through the use of innovative and specialized investigation techniques.
This enhanced collective effort – both at international and national level – is clear evidence that illegal elephant ivory trade is increasingly being recognized by States as a serious crime, which now carries a much higher risk of detection, prosecution and conviction in a growing number of countries – with higher penalties, including fines, imprisonment and the confiscation of assets being imposed.
It is through such strengthened and sustained collective efforts that we will be able to reverse the current disturbing trends in the poaching and smuggling of the African elephant, and combat other wildlife crimes much more effectively.
------
Ladies and gentlemen, at the very beginning of a new year, we hope that the underlying messages being conveyed through today’s public crush of seized ivory in Dongguan are heard loud and clear by anyone who is involved in this highly destructive illicit activity.
Illegal trade in elephant ivory is having a devastating impact on the African elephant, and it also poses a threat to people and their livelihoods - it must stop.
China, and the entire international community, are determined to end this illicit trade.
If you do trade illegally in elephant ivory, you now run a much higher risk of being arrested, prosecuted and severely punished - and the return on your ‘investment’ in illegally traded ivory may end up being jail time, heavy fines, and seized assets.
------
Finally, I would like to express my thanks to the Chinese Government for today’s important event.  It has served to raise public awareness about the impacts of wildlife trafficking - and most particularly about the impacts on the African elephant.
Thank you.