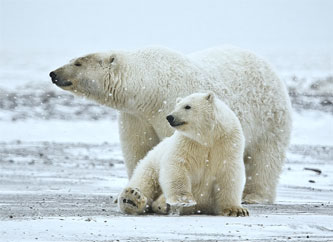 The founding text of CITES recognizes that “people and States are and should be the best protectors of their own wild fauna and flora”. The States of the Arctic Region are all Parties to CITES and they have taken further complementary measures under the Agreement to protect the polar bear.
There is great complementarity between our two instruments: both are focussed on species and with strong relevance for indigenous and local communities and their livelihoods - and the Agreement provides the right backdrop for further enhancing successful CITES implementation.
In fact, CITES operates in a symbiotic way with a number of regional and global species-specific agreements and conventions - such as the International Convention for the Regulation of Whaling and the Convention for the Conservation and Management of the Vicuna - and we are delighted to see the Agreement on the Conservation of  Polar Bears reinvigorated on this its 40th birthday.
----------
Distinguished delegates, the polar bear, along with all bears, was included in Appendix II when CITES entered in force on 1 July 1975.
Appendix II of CITES includes 96% of the more than 35,000 listed species under the Convention. Species included on Appendix II are not necessarily threatened with extinction but could become so if their trade is not strictly regulated - to be sure it is legal, sustainable and traceable. Commercial international trade in these species is allowed provided it is not detrimental to the survival of the species in the wild.
Less than 3% of species listed under CITES are on Appendix I. They are threatened with extinction and commercial trade in them is generally prohibited.
While the numbers of individual trades in specimens is much higher, in terms of whole polar bears (combining skins and trophies), about 400–500 polar bears are estimated to be internationally traded annually.  Around 80% of all such exports originate from one range State.
The conservation and sustainable use of polar bears has been debated at length at recent meetings of the Conference of the Parties to CITES (CoP) and most recently at CoP 16, held in Bangkok in March of this year.
These debates have largely revolved around proposals to transfer the polar bear from Appendix II to Appendix I, which would generally prohibit any international commercial trade of the polar bear.
These proposals have been sparked by concerns over the impact of climate change on sea ice, which serves as polar bear habitat, and how this will exacerbate other potential threats to the polar bear, including but not limited to, utilization and international trade.
The debates on these proposals have attracted the interest of all Parties to CITES - as well as conservation and animal rights groups and the local and indigenous peoples whose livelihoods are inextricably linked to the polar bear and its habitat.
On the two recent occasions at which proposals have been put forward - in 2010 and 2013 - a rich and very intense debate amongst Parties and all stakeholders ensued but it did not result in a consensus being reached and was followed by a vote of CITES Parties.
On each occasion the CITES CoP decided that the criteria for inclusion of the polar bear in Appendix I under CITES were not met at the present time.
The effect of these decisions is that the polar bear remains in Appendix II of CITES, which allows international trade under strictly regulated conditions to continue - should a State choose to authorize trade.
------------
Distinguished delegates, the situation under CITES is not static and the CITES Animals Committee, one of two CITES scientific committees, keeps under regular review, the levels of international trade in specimens of polar bear in relation to the conservation status of the species.
To date, the Committee has not identified any problems with the biological sustainability of the trade being permitted - but should problems be identified in future, including in relation to the impacts of climate change on sea ice, then the Secretariat will turn to the Agreement for advice and cooperation, just as it did in 2010 and 2013 in relation to the two proposals considered by the CITES CoP.
Given the nature of the recent debates, it is also worth noting that the two CITES science committees have identified key points regarding climate change impacts on CITES listed species, including that:
"climate change impacts might exacerbate existing stressors or modify existing complex environmental, ecological and physiological processes."
As a result, one may expect that international trade in polar bear, and its compliance with CITES provisions, will remain a live issue for some time to come.
-------------
Distinguished delegates, the continuing importance of CITES was recognised by Heads of State and government at the UN Conference on Sustainable Development, known as Rio+20, last year, where it was described as an agreement that stands at the intersection between trade, the environment and development.
The nature and extent of the debate on the polar bear under CITES is a practical example of how closely these three issues are interconnected and how the Convention addresses them – and the experience gained in dealing with such issues under CITES may be of value to the current debate and negotiations on the Sustainable Development Goals and the post 2015 development agenda.
--------------
Distinguished guests, friends and colleagues, we look forward to continuing to work closely with the Agreement for the next 40 years - and we thank you for your ongoing cooperation in ensuring the survival of the polar bear in the wild for this generation and many more to come.