Wildlife crime ranks among trafficking in drugs, arms and humans

An economic crime perpetrated by criminal syndicates in the most
remote regions, exploiting local people and lax laws
Just this week, in Zimbabwe's largest game park, more than 80 elephants were killed for their ivory by poachers who poisoned a waterhole with cyanide. Across Zimbabwe's border, in South Africa, a record 688 rhinos were killed in 2013.
In 2011 alone, 25,000 wild elephants were illegally killed in Africa, primarily for their ivory. Over the past few years, poachers killed the last wild rhinos in Mozambique and Vietnam. The world's population of tigers has dwindled to around 3,000 animals in the wild. These are some of our most emblematic species, but wildlife crime is also robbing the natural heritage of peoples and states. 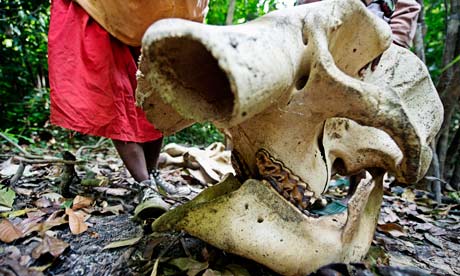 Wildlife crime now ranks among trafficking in drugs, arms and human beings in terms of profits. It is an economic crime often perpetrated by criminal syndicates operating in the most remote regions of our globalised world, exploiting local people and lax laws or enforcement for personal gain.
The nature of wildlife crime has also changed. Gunmen and flatbed trucks have been replaced by helicopters and potent automatic weapons. The animals in their sights have little chance in this gory pursuit for illicit profits. Behind the gun teams are sophisticated supply chains using modern technology, as well as bribes and corruption, to deliver animal parts to every corner of the earth.
Courageous, but underpaid park rangers are often outmanned, outgunned and outwitted in a deadly game of hide-and-seek with poachers. Ranger services have been retrained to spot illegal kills, but have had to call in the military to do their job.
Profits are enormous. In east Asia and the Pacific, profits from illegal wildlife trade are conservatively estimated at $2.5bn annually. UNODC calculated in 2011 that the total value of the illegal global wildlife trade was between $8bn to $10bn annually (excluding timber and marine wildlife).
This surge in the wildlife heritage theft of many States cannot continue. Many of the species teeter on the edge of extinction, and we need to fight back. But how? First, we must acknowledge the scale of the problem to give ourselves the means to tackle it.
Understanding what needs protecting is a priority and has been one of the raisons d'être of Cites since 1973. The Convention regulates and monitors international trade in more than 35,000 wild species to ensure that this trade does not threaten their survival. Underpinning the fight against wildlife crime and Cites decisions is a commitment made in the UN Convention Against Transnational Organised Crime.
But for these conventions to be effective, countries must make wildlife crime a serious crime in their own legislation. And to win the fight, they must deploy the techniques used against illicit drugs such as undercover operations and "controlled deliveries" – where contraband is not seized, but tracked to its destination in order to catch the people involved.
Today, during the 68th session of the United Nations General Assembly, an event in New York will bring together many of the key actors involved in the fight against wildlife crime. At that meeting, we intend to deliver the same key message: Let's make wildlife crime a serious crime in national legislation, apply enforcement measures throughout the entire enforcement chain, build a rapid response, share intelligence and break the power of the criminal networks while halting their profit flow.
The Cites Secretariat and UNODC are also partners in the International Consortium on Combatting Wildlife Crime, alongside Interpol, the World Bank and the World Customs Organisation. Together, we strive to cover every base – economic, social and environmental – in order to stop the traffickers profiting from this crime.
It is essential that we collectively do the serious work to drive the criminals out of business. If not, we will be left explaining to future generations how we started to lose the struggle against wildlife crime under our watch.