High-level Panel Discussion: "Poaching and Illicit Wildlife Trafficking – A multidimensional crime and a growing challenge to the international community"

News
SG statements
UN General Assembly side event
hosted by Germany and Gabon, New York, 26 September 2013
Opening Remarks by Session Moderator CITES Secretary-General John E. Scanlon
Excellencies, distinguished guests, colleagues
On behalf of the two co-chairs, Germany and Gabon, I would like to warmly welcome you to this afternoon’s High-Level Discussion.  I will be your moderator.
I suspect everyone here today has seen graphic images of elephant and rhino slaughtered for their ivory and horn - a tragic crime scene that is now being replicated every day across their range. 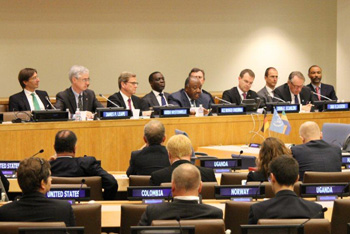 What these images do not reveal is the profound impact this poaching and illicit trafficking is having upon peoples livelihoods, national economies, and national and regional security.
Nor do they reveal the faces of the organized criminal gangs and rebel militia who are driving this illicit activity - reaping high profits at the expense of local people and laundering their ill gotten gains on all manner of criminal activities.
In March of this year CITES Parties met in Bangkok and shone a spotlight on the disturbing spike in illegal wildlife trade we are now experiencing - especially with elephant and rhino - and the real and immediate threat this poses to wildlife and to people.
In Bangkok we witnessed unprecedented levels of cooperation and a powerful suite of decisions were adopted by consensus on combatting wildlife crime, addressing both the demand and supply side.
In the context of today's discussion, two things stand out from Bangkok:
It is against this backdrop that our co-chairs - Germany and Gabon - have convened this high-level discussion in the margins of the UN General Assembly to discuss the multidimensional nature of this illicit activity, the challenges it poses for the international community, and how the UN system can best respond.
The co-chairs are seeking an open discussion where different views and perspectives can be shared both on the nature of the challenge and the way ahead.
We have a truly wonderful panel to start the discussion.
After we hear from the Panel we will open the discussion to participants.
Panel and Statements
H.E. Mr. Ali Bongo Ondimba, President of the Gabonese Republic (see statement)
H.E. Dr. Guido Westerwelle, Federal Minister for Foreign Affairs of the Federal Republic of Germany (see statement)
H.E. Mr. Jan Eliasson, Deputy Secretary-General of the United Nations (see statement)
Mr. James P. Leape, Director General of the World Wide Fund for Nature (WWF).
Interventions
Interventions were made by:
Written statement submitted by Malaysia
Moderator's concluding remarks
We have had a wonderful discussion today.
What is abundantly clear Mr. President, Hon. Minister, is that there is overwhelming support for the leadership shown by Germany and Gabon in bringing this critical issue to the margins of the UN General Assembly.
All of the interventions we have heard this afternoon supported the Panel members characterisation of the serious poaching and illicit wildlife trafficking we are experiencing today as presenting a real and immediate threat to local people, national economies, and national and regional security - especially as it affects elephant and rhino.
Further, these are crimes that are being driven by organised criminal gangs and rebel militia and a response that is commensurate with the scale and nature of the risk is required.  It has gone beyond being an environmental issue and requires the leadership and support of customs, police, the judiciary and on some occasions the military.
There was a clear recognition from everyone that no one agency, country or region acting alone can combat these serious crimes. A collective effort is required, one that includes source, transit and destination states and addresses both demand and supply, as was recognised in the outcomes of Rio+20.
There was wide support for making best use of exiting instruments and initiatives in combatting wildlife crime, with many placing strong emphasis on CITES and the UN Office on Drugs and Crime conventions against organised transnational crime and corruption, as well as the International Consortium on Combatting Wildlife Crime (ICCWC).
There was also support for the UN system playing a critical role and and many expressed support for several options that had been identified by the Panel - an UNGA Resolution, a UN Special Envoy on Wildlife Crime, and a NY Friends Group - as well as for an UNGA Resolution declaring 3 March as World Wildlife Day, which Thailand advised it will put forward this year.
We have indeed been fortunate for the leadership shown by the co-chairs, Germany and Gabon, in bringing this critical issue to the margins of the UNGA.  The level of interest in the issue is evident from the large number of people here today - and we express our deep gratitude to everyone who has attended for your support in fighting against wildlife crime and for finding ways to carry it forward in the UN.
See also:
Wildlife crime ranks among trafficking in drugs, arms and humans by Yury Fedotov, Executive Director of UNODC and John E. Scanlon, CITES Secretary-General
Wildlife crimes and punishments by Yury Fedotov, Executive Director of UNODC and John E. Scanlon, CITES Secretary-General
WWF press release: Heads of state come together in call for UN action to combat wildlife crime
Photos from the event on the CITES Flickr page