Presentation to the UN Commission on Crime Prevention and Criminal Justice 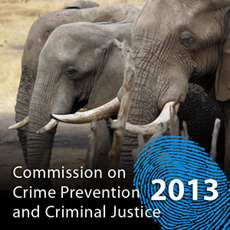 I would like to sincerely thank the Commission for holding this Thematic Discussion and for extending an invitation to the CITES Secretariat to contribute to its deliberations.

I would also like to express my deep gratitude to Executive Director Yury Fedotov for his  strong personal support for, and commitment to, combatting wildlife and forest crime and that of his staff as well.

CITES is a global agreement with 178 States Parties and another five in the process of acceding.

CITES currently regulates international trade in about 35,000 species of plants and animals, which we collectively refer to as wildlife.

Of these about 3% are already threatened with extinction and they are found on Appendix I of the Convention. Commercial trade in these species is generally prohibited, such as for most elephants and rhinos, as well as tigers and great apes.

For the other 97%, they are not yet necessarily threatened with extinction but they could become so if international trade is not strictly regulated to ensure that such trade is legal, sustainable and traceable.  96% of these species fall under Appendix II of the Convention.

We have records of over 13 million trade transactions in CITES species, such as for the meat of the Queen conch, the wool of the vicuna, the skins of the crocodile and the bark of the African cherry tree.

We experience illegal trade in relation to species falling under both Appendix I and II of CITES, with illegal trade being estimated by some to be valuued at between USD 10 and 20 billion per year, excluding marine and timber species.

By way of example, a report prepared by the International Trade Centre (ITC) estimates the legal trade in five CITES listed pythons to be worth USD 1 billion a year at the top end of the value chain.  However, the illegal trade in the same species is estimated to be worth the same amount, if not more.  This is done in many ways, such as falsifying permits, and amongst other matters it undermines the sustainability of the legal trade and deprives the States of revenue.

In overall terms, there are only 25,000 rhinos left on the African continent, with another 3,000 in Asia, including just 200 Sumatran rhinos.  The last Javan rhino in Viet Nam was lost in 2011, allegedly to poachers.

Tigers in the wild only number 3,200 and there are just 800 Mountain gorillas left in the wild.

As you can see, with some species we are quite literally down to the wire.

The levels of poaching and smuggling is having a devastating impact on the animals themselves but today we are also confronted by increasing levels of organised crime and in some cases rebel militia and rogue elements of the military.

Brave rangers serving in the front lines are being killed and injured in the line of duty, officials are being corrupted, local people are being recruited as poachers and are being killed, and local communities are being deprived of legitimate development choices at the expense of the few who benefit from such illegal activity.

This poses a serious threat to the national and regional security of some States as well as national economies and it quite literally robs States of their natural resources and cultural heritage.  It undermines good governance and the rule of law.

Time is short this morning and I would like to focus on the crisis confronting the African elephant and rhino.

We have two sophisticated monitoring mechanisms for monitoring and analysing the illegal killing of elephants and the related illegal trade in ivory - known by their acronyms MIKE and ETIS. These programmes have shown us that in 2011 alone in the order of 25,000 elephants were slaughtered across the African continent and 2012 looks like it will be as bad, if not worse. This is pushing local and regional populations into decline and could lead to local and regional extinctions if these trends are not reversed.

Seizures are at their highest levels in almost two decades and large scale seizures, defined in the reports as 800 kgs or more, are at an all time high.  Such large seizures of ivory crossing countries and continents is a clear indicator of the involvement of organised crime.

These numbers may not however, in themselves, convey to you what is going on right now, and I would like to share with you just three of several recent disturbing events:

- February, 2012, in Bouba N'Djida National Park in northern Cameroon, between 300-450 elephants were slaughtered for their ivory by heavily armed and well organised groups coming from across neighbouring countries. The ivory is believed to have been exchanged for arms and the President of Cameroon eventually decided to deploy 150 soldiers to support the rangers in their efforts to protect the park and its wildlife.

- April, 2012, Garamba National Park in the Democratic Republic of the Congo - a World Heritage site - 22 elephants were shot from a helicopter with a high degree of marksmanship.  The tusks were removed.

- September, 2012, Zakouma National Park in Chad, five rangers were killed in what is believed to have been a revenge attack for disturbing poachers.

These are highly destructive crimes and they are being carried out by dangerous and ruthless individuals and organised transnational gangs.  It is highly lucrative yet it generally carries a lower risk of detection and prosecution, and if prosecuted carries a lower risk of conviction or penalty.  This observation is reflected in the crime trends report presented to this meeting, and in particular at pages 27-30, which shows the low level of prosecutions and convictions in the environment area generally, and even lower for wildlife crime.  Such statistics are out of sync with what is happening on the ground.

At the 16th meeting of the Conference of the Parties to CITES held in Bangkok last month, and most generously hosted by the Kingdom of Thailand, CITES Parties considered enforcement issues at great length and adopted a very strong suite of decisions and resolutions, all by consensus, in a convention that often votes on issues.

Through these decisions and resolutions the CITES Parties addressed the need to, amongst other matters: treat such crimes as serious crimes; cooperate at all levels; work across source, transit and range States; make much better use of forensics; deploy the sorts of techniques used to combat other serious crimes, such as illicit trade in narcotics - for example, controlled deliveries and covert operations; and to move beyond seizures by ensuring follow up investigations and prosecutions.  As Secretary-General, I was also asked to cooperate with the Executive Director of UNODC on the national security implications for certain countries in Africa of this illegal killing and trade.

There was also recognition of the importance of the International Consortium on Combatting Wildlife Crime (ICCWC), and its work to date, including bringing together the heads of Customs and police of the 13 range states following the Global Tiger Summit hosted by President Putin in St Petersburg in 2010; training on controlled deliveries; and the development of the Forest and Wildlife Crime Analytical Toolkit.

There is some excellent enforcement-related work going such as initiatives in China, South Africa and the United States but we must collectively do much more if we are to prevent illegal trade in wildlife driving some species to extinction, with all of the associated development and security implications, both for people and for States.

The role of this Commission, of the two UN Conventions against Transnational Organised Crime and against Corruption, as well as of the UNODC itself, is indispensable in the fight against wildlife crime.

I can honestly say that if we do not have you, and other enforcement related entities, working directly on these issues we will simply not be able to win this fight.