at an event to celebrate the 40th anniversary of CITES 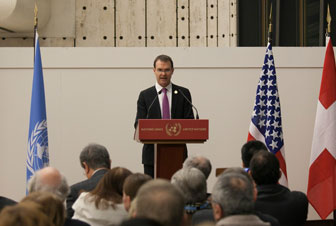 This evening we celebrate the vision and commitment of the people who pioneered this ground-breaking Convention in Washington D.C. 40 years ago, and the many thousands of people who are working on the front-lines to protect wildlife today.  It is an inspiring example of successful international cooperation and national action that gives us all hope for a sustainable future in which people and wildlife can coexist in harmony.

Since 1973 we have witnessed growing prosperity, changing consumption and production patterns, vastly enhanced scientific knowledge, phenomenal advances in technology and, above all, exponential growth in global trade.  Looking at population figures alone we have grown from 4 to 7 billion people - and that is 7 billion consumers!

Four decades on, CITES has stood the test of time and it is more relevant today than ever, which was clearly expressed by World leaders at the Rio+20 conference last year where they recognised the important role of CITES as an international agreement that stands at the intersection between trade, environment and development.

Allow me to briefly remind you of the origins of our Convention. The need for a convention to regulate wildlife trade was first identified in a decision of the IUCN General Assembly held in Nairobi back in 1963.  The 1972 UN Conference on the Human Environment held in Stockholm called for negotiations on a convention to be concluded as soon as possible.  The US Government heeded this call and hosted the Plenipotentiary Conference in 1973 - and today we acknowledge the leadership role the US played in successfully concluding the negotiations.

It is worth remembering that up until 1973 there were no global controls over international trade in wildlife - and the US government’s own figures on imports into the US in 1969, figures that were openly shared at the Plenipotentiary Conference, are nothing short of staggering.  They included the import of just under 8,000 leopard skins, close to 1 million live birds and over 1.4 million live reptiles.  But these numbers pale in comparison with the import of almost 99 million live fish.

This was clearly an issue that cried out for international cooperation and the Convention on International Trade in Endangered Species of Wild Fauna and Flora was concluded and signed in Washington D.C. on 3 March 1973.

Today we pay tribute to the negotiators for achieving a treaty that was focussed and pragmatic, with provisions that could be further enhanced over time.  They also concluded a convention that deals with international trade and the environment that has harmoniously coexisted with the WTO and its predecessor for the past 40 years.  Scanning through the record of proceedings the various committees were chaired or co-chaired by Australia, the (then) German Democratic Republic, Guatemala, Japan, Kenya, Mexico, Swaziland, the Philippines, the UK and the US.

CITES now has 177 Parties with the Republic of the Maldives having recently deposited its instrument of accession with the Depository Government, Switzerland, which has served as the Depositary Government since the inception of CITES as well as the host of the Secretariat, for which we are most grateful.  As an aside, it also generates the highest number of annual permits of any CITES Party, 115,000 – mainly for watch straps.  And I am pleased to say that the one State will soon accede to the Convention and another five States are in the process of acceding.

As we celebrate 40 years of CITES we are also very conscious of the fact that we are confronting the worse spike in decades in the illegal killing of elephant and rhino and illegal trade in their ivory and horn - which is increasingly driven by organised criminal gangs and in some instances rebel militia groups.  These issues and many others will be before the CITES Parties at the 16th meeting of the Conference of the Parties starting on 3 March, which provides the opportunity for governments to express their collective will to reverse these disturbing trends and to take further decisive actions.

And we are most grateful to the Kingdom of Thailand, for the extraordinary generosity they have extended to the international community in agreeing to host this critical meeting in the beautiful and vibrant City of Bangkok.  Ambassador, we are all very much looking forward to joining you in Bangkok and to enjoying the very warm hospitality that we all know will be extended to us.

While the challenges we face are real and serious they should not overshadow our conservation successes, which we also celebrate today. In many instances these successes have also secured sustainable livelihoods for people through ensuring legal, sustainable and traceable trade - such as with the vicuna, crocodiles and the Queen conch.

The recovery of the rhino, in particular the white rhino, has been a great conservation success with population numbers in Africa rising from about 2,000 in 1973 to over 19,000 in 2012, with South Africa having conserved more than 90% of this total.  But these successes are under great threat from the recent and disturbing spike in illegal killing and related trade, which the short video we will now play demonstrates in a very poignant manner.

Let me close by once again extending our sincere thanks to the Missions of the US, Switzerland and Thailand for hosting this wonderful event and in particular to the Ambassadors and their staff for their strong support.  I also thank the hard working Secretariat staff - each of whom deserves a medal for doing so much with so little - and the many inter governmental and non government organisations who are here tonight and whose contribution to CITES is indispensable.