In declaring 2011 as the International Year of Forests, the United Nations General Assembly stressed its conviction that "concerted efforts should focus on raising awareness at all levels to strengthen the sustainable management, conservation and sustainable development of all types of forests for the benefit of current and future generations", and called upon governments, relevant regional and international organizations, and major groups to support activities related to the International Year of Forests.

CITES has responded to this call in line with its mandate.

According to the Food and Agriculture Organization of the United Nations (FAO), just over 4 billion hectares of the world (31% of the land surface of the earth) is covered by forests. The trade in wood and non-wood forest products represents billions of American dollars every year and many forest products enter international trade.

Since 1975, CITES has been providing a framework for tracing international trade in the species it protects and helping to ensure that products made from them are from legal and sustainable sources.

Around 350 tree species are now included in the three CITES Appendices, and trade in their products is therefore subject to regulation to avoid utilization that is incompatible with their survival.

CITES Parties have included in Appendix I six tree species that are currently threatened with extinction and are or may be affected by international trade. An Appendix-I listing means that Parties have agreed not to permit any international commercial trade in wild-sourced products of these species. About 85 species are included in Appendix II, such as afrormosia (Pericopsis elata) from Africa, ramin (Gonystylus spp.) from Southeast Asia and bigleaf mahogany (Swietenia macrophylla) from Central and South America, all of which are valuable timber species. 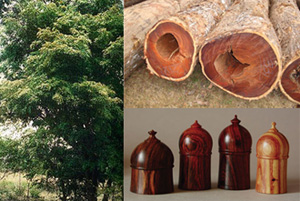 Dalbergia retusa and its products

A growing number of countries are also requesting the inclusion of commercially-important native trees in Appendix III, so that importing and other exporting States can help them ensure that only legal timber and other tree products find their way into the international market.

Following such requests from the Russian Federation, Bolivia and the Seychelles in 2010, the pace accelerated in 2011 with Brazil requesting the careful regulation of trade in West Indian cedar (Cedrela odorata), Panama making a similar request in relation to two species of cocobolo (Dalbergia spp.) and finally Madagascar’s request for CITES to assist in regulating international trade in 109 species of ebony (Diospiros spp) which came into effect on 22 December.  More information can be found here.

Of course, with close to  35,000 species listed in the CITES Appendices, international trade in many other forest plants and animals is also regulated by the Convention.

Listing of species in the CITES Appendices has been followed up with action on the ground, with CITES spearheading workshops on implementing the Convention for agarwood (Aquilaria spp. and Gyrinops spp.) in Kuwait and Indonesia. Kuwait organized an Agarwood workshop in October and set the basis for discussing administrative issues and other matters regarding the sustainability of the harvest (the non-detriment findings). One month after the workshop in Kuwait, Indonesia organized the Asian Regional Workshop on Agarwood: Management of Wild and Plantation-Grown Agarwood Trees. This workshop was held in late November 2011 in Bangka Tengah, Province of Bangka Belitung Islands, Indonesia. The European Commission contributed financial support to both Workshops. For more information on the workshops, click here.

Partipicants in the meeting in Guatemala

Workshops were also held for bigleaf mahogany in Brazil and a meeting of its Working Group on the Bigleaf Mahogany and Other Neotropical Timber Species in Guatemala.

The conservation and sustainable use of the world’s forests can only be achieved with the active cooperation of all those that hold a stake in their management. At the global level, CITES is therefore working in close collaboration with key international organizations in the field.

Since 2005, CITES has been working in partnership with the International Tropical Timber Organization (ITTO) on a major joint programme to support the implementation of the Convention in countries that are members of CITES and ITTO. Some 4.5 million American dollars were raised for the Phase I of this project which is focused on key tree species in Asia, Africa and Latin America.

At the 47th Session of the International Tropical Timber Council and Associated Sessions of the Committees held in Guatemala in November 2011, the ITTO and CITES Secretariats reported on progress and received strong backing from importing and exporting countries alike. Major funding for an extension of the programme is expected to be agreed shortly. For more information see:  http://www.iisd.ca/forestry/itto/ittc47/14nov.html

Throughout 2011, the CITES Secretariat has paid particular attention to the goals of the International Year of Forests, and the results have been very encouraging; highlighting the key role of forests and promoting the important role of the Convention in achieving better forest management for the benefit of forest species and for the people who depend upon them.