Statement by John Scanlon, Secretary-General of CITES to the 17th Special Meeting of the International Commission for the Conservation of Atlantic Tunas 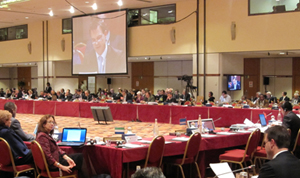 It is a great pleasure to be with you today at this 17th Special Meeting of the Commission.

This is the first time that a Secretary-General of the Convention on International Trade in Endangered Species of Wild Fauna and Flora, known as CITES, or the Washington Convention, addresses the International Commission for the Conservation of Atlantic Tunas. My intervention follows the active and constructive participation of your Chair, Mr Fábio Hazin, at the 15th meeting of the Conference of the Parties to CITES, held in Doha in March this year. Mr Hazin’s participation was much appreciated by both the Parties and the Secretariat and I am pleased to be able to make a reciprocal contribution by joining you today.

Most of you will already know that CITES is a legally-binding global agreement with 175 States-Parties, including all ICCAT members except Angola, which is currently in the process of acceding to the Convention, as are several other States. The Convention was adopted in 1973 and entered into force in 1975.

CITES has a mandate to prevent the overexploitation of wild species, including fish and other marine species, through international trade. Being a global legal instrument with close to universal membership enables the law enforcement community in one part of the world to respond to illegal practices - such as illegal, unreported, unregulated or IUU fishing - in another. We work in very close cooperation with Interpol, the World Customs Organization and many other intergovernmental organizations in this respect. In fact I have just returned from the 79th General Assembly of Interpol where a significant resolution was adopted by a unanimous vote on this organization’s role in addressing environmental crime.

But CITES should not be perceived as a Convention for banning international trade – it is not. Of the 34,000 species listed under CITES; only 3% are included in its Appendix I, which prohibits international commercial trade in wild-taken specimens. And this prohibition does not, for example, cover trade in specimens produced in aquaculture. The remaining 97% of the species covered by CITES are listed in its Appendices II and III. Trade in these species, including commercial trade, is permitted, but regulated to ensure that it is legal and sustainable. These objectives of legality and sustainability are of course common to ICCAT.

Our records of international trade show that, over the last 35 years, well over 10 million authorized transactions have occurred under CITES. 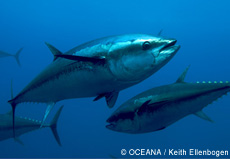 It is important to note also that CITES deals not only with terrestrial species. The CITES Appendices have included marine species since the Convention entered into force. Nearly 100 fish and other marine aquatic species, as well as 2,000 coral species, are now covered by CITES. The Convention has brought benefits for their conservation and sustainable use, such as for the queen conch in the Caribbean and northern South America, whose trade represents more than 60 million US dollars every year.

Many different intergovernmental agreements and many actors in both the public and private sectors are involved in the management of natural resources, including fish. The critical issue is the complementarity between different instruments and how well they work together to achieve common objectives, as is appropriate.

CITES has had a Memorandum of Understanding with FAO since 2006 and, at a recent expert meeting on sharks jointly convened by FAO and CITES, it was agreed that harvest-related measures and trade-related measures can and should be used in tandem, where appropriate, to ensure the successful management of fisheries or any other natural resources. The key words are ‘complementarity’ and ‘where appropriate’.

With this in mind, I recall the intervention of the ICCAT Chair at the meeting of the Conference of the Parties to CITES in Doha, earlier this year, when he said that "CITES and ICCAT are not in competition and could benefit from strengthened collaboration”. We are in full agreement with these sentiments and I hope that your generous invitation and my attendance here today are seen as very tangible public expressions of our strengthened collaboration.

CITES Parties have been concerned about the conservation and sustainable use of commercially-exploited aquatic species for many years, and some of you will recall the discussions about the Atlantic bluefin tuna at our eighth meeting of the Conference of the Parties, in Kyoto, in 1992. Their concern has heightened in recent years and it seems very likely that such concerns will not abate in the years to come.

With respect to the species under your purview, three have been subject to detailed discussions in CITES: the Atlantic bluefin tuna and the Oceanic white tip and porbeagle sharks.

Whatever the precise figures, there seems to be general agreement that the stocks of these species have declined very considerably. The third FAO expert advisory panel for the assessment of proposals to amend Appendices I and II of CITES concerning commercially-exploited aquatic species, convened by FAO to review proposals for the March meeting of the Conference of the Parties to CITES in Doha, concluded that their decline had been sufficiently large to warrant inclusion in the CITES Appendices.

There was not, however, the required two-thirds majority of CITES Parties in favour of including these three species under the Convention. And I think it is fair to say that much of the debate was on the role of ICCAT in the conservation and sustainable use of the species, and in particular with respect to Atlantic bluefin tuna.

We are now exploring ways to address various matters that were raised during the debate. A key consideration is how we could improve the listing process to ensure that any potential CITES actions on marine species are better synchronized with those of other actors, such as Regional Fishery Management Organizations.

Concerns regarding overfishing are being addressed in many fora, and at the recently concluded meeting of the Conference of the Parties to the Convention on Biological Diversity in Nagoya, the 193 Parties to that Convention agreed to the following global targets:

By 2020, all fish and invertebrate stocks and aquatic plants are managed and harvested sustainably, legally and applying ecosystem-based approaches, so that overfishing is avoided, recovery plans and measures are in place for all depleted species, fisheries have no significant adverse impacts on threatened species and vulnerable ecosystems and the impacts of fisheries on stocks, species and ecosystems are within safe ecological limits.


By 2020, the extinction of known threatened species has been prevented and their conservation status, particularly those most in decline, has been improved and sustained.

These targets were adopted by the Parties to the Convention on Biological Diversity, but were intended to serve as a useful framework, as appropriate, for all stakeholders involved in managing biodiversity and natural resources.

Mr Chair, as you see, while CITES and ICCAT have different histories and mandates, we, along with many others, share a common interest in the conservation and sustainable use of the marine species under our respective remits.

The CITES Parties are now looking to ICCAT to provide decisive leadership for the recovery plans for the Atlantic bluefin tuna – as well as more effective management measures for the Oceanic white tip and porbeagle sharks – based upon sound science and backed up by effective compliance. If, at any stage, trade-related measures were considered helpful in complementing these efforts, CITES, with its record of effective action to conserve and sustainably manage international trade in species covered by the Convention, whether marine or terrestrial, is available to assist, should the Parties so decide.

Finally, please allow me to thank you for giving the CITES Secretariat the opportunity to intervene at your meeting today. I wish you every success and look forward to our harmonious and fruitful cooperation in the future as we work within our respective mandates towards the common objective of the conservation and sustainable use of marine species.

In particular, I look forward to working closely with Mr Hazin who was elected earlier this year as chair of the CITES Standing Committee’s Working Group on introduction from the sea, one of the four types of international trade covered by CITES. His election further illustrates the strong interest which CITES Parties have in enhancing the complementarity and mutual supportiveness of our two legal instruments.