Remarks by the Secretary-General of CITES, Mr John Scanlon on the occasion of the 35th anniversary of CITES

Museum of Natural History of the City of Geneva 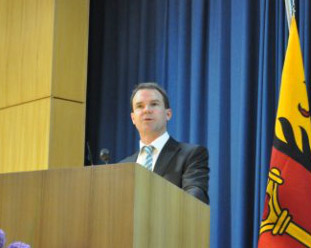 Your excellencies, Madame la Maire, distinguished CITES authorities, colleagues within and outside of the United Nations system, friends of CITES, ladies and gentleman,

2010 is an important year for many reasons.

On World Environment Day 2010, Global Biodiversity Outlook 3 was launched. It provides a stark reminder of the scale of the challenges ahead in ensuring the conservation and sustainable use of biodiversity.

While Global Biodiversity Outlook 3 outlines what we need to do in graphic fashion, it also acknowledges a few successes. And amongst them is the success of CITES in ensuring no species of wild fauna and flora is endangered by international trade.

And the International Year of Biodiversity is about acknowledging success as well as failure and current and future challenges. And today we pause for a moment to celebrate the success of CITES.

The reasons for the success of CITES are many and varied but three that stand out are the:

– Quality of the original text of the Convention, adopted in 1973. It is focused, pragmatic, and establishes a robust international regulatory regime to address trade in wild plants and animals - a regime that has evolved to meet emerging challenges. It is a regime that has stood the test of time.

– Commitment of the Parties to implement the Convention, ensuring that trade in wild plants and animals is legal, traceable and sustainable. And they have done so by putting into place national level Management and Scientific Authorities, and enforcement measures. It is these authorities that are the engine room of the Convention and have ensured its success.

– Relationships that have been forged in the implementation of the Convention with a broad range of other entities both within and outside of the United Nations, including: FAO, ITTO, the World Bank, WTO, UNEP, UNODC, WCO, INTERPOL, IUCN, WWF, TRAFFIC and many others. As an aside, it was a resolution of the IUCN Congress in Nairobi in 1963 that called for a treaty addressing trade in wildlife, which served as the catalyst for the negotiation of the Convention, negotiations that concluded 10 years later in Washington D.C.

But today we celebrate the Parties to CITES, we celebrate their vision and commitment from 1975 to today. It is a fantastic example of successful international cooperation lasting almost four decades that we can collectively reflect upon on this special day and in this special year for biodiversity.

In celebrating the 35th anniversary of CITES we are most fortunate to be joined by several founding Parties, a new Party, and a Management Authority.

We are joined by the:

– Ambassador of the Swiss Confederation – Dante Martinelli – Permanent Representative of Switzerland to the United Nations Office and other International Organizations in Geneva, as the Depositary Government and Host Country for the CITES Secretariat. Switzerland was also the third Party to ratify CITES.

– Mr Thomas Jemmi, who is Head of the CITES Management Authority in Switzerland and Deputy Director General of the Swiss Federal Veterinary Office. We are very happy to have Thomas with us today as Management Authorities are, as mentioned earlier, the engine rooms of the Convention and today we want to acknowledge their role and function under the Convention.

We also sincerely thank the Swiss Government for hosting today’s reception and for generously donating funds to enable us to acquire video conferencing equipment for the Secretariat. This will enable us to connect to more meetings, to travel less, and to reduce our carbon footprint. It will also ensure we spend more time here in Switzerland – and hence our hard earned cash – so we are sure it will prove to be a sound investment by the Government of Switzerland!

– Deputy Permanent Representative of the Kingdom of Bahrain to the United Nations Office and Specialized Institutions in Geneva – Ms Muna Abbas Radhi – to announce their decision to accede to CITES in 2010, making them the 176th Party to CITES. We are delighted to have the representative from Bahrain with us today to share this exciting news and warmly welcome them to the Convention in the International Year of Biodiversity.

The Secretariat exists to serve the Parties and assist them in the effective implementation of the Convention. One area we are focusing a lot of attention on is how we better manage and share our knowledge base. We have records going back many decades on trade under the Convention, and today we have over ten million such records. In an effort to assist Parties analyse these data, today we launch the ‘CITES Trade Data Dashboards’. These provide a graphic display of data on trade in species covered by the Convention against different taxonomic groups at global and national levels.

In 1975 there were four billion people on the planet; in 2010 we are approaching seven billion. The value of global trade has grown fourteen fold over the same period. We are seeing increasing prosperity and changing consumption patterns. This visionary Convention is as relevant today, if not more relevant, in enabling us to continue to benefit from wild plants and animals– and now I quote from the founding text of the Convention – from the “aesthetic, scientific, cultural, recreational and economic points of view”.

Finally, thank you to the Geneva Environment Network, and to my staff, for all of their efforts in organizing today’s reception and to all of you, distinguished Ambassadors, representatives of permanent missions to Geneva, colleagues within and outside of the United Nations system, and friends of CITES.