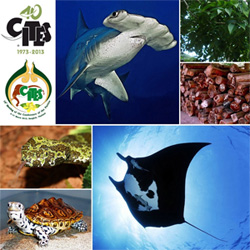 Geneva, 14 June 2013 – The new listings of species and the 165 Decisions and 36 Resolutions adopted or revised at the 16th meeting of the Conference of the Parties to the Convention on International Trade in Endangered Species of Wild Fauna and Flora (CITES) in Bangkok, in March 2013 entered into force on Wednesday 12th June. As a result, the 178 member countries will start regulating the international trade in over three hundred new species now protected by CITES.

The CITES Secretary-General, John E. Scanlon, said: “After a highly successful meeting of the Conference of the Parties in March, we are now moving full steam ahead to implement the decisions taken by the 178 Parties to CITES. Through the CITES permit system, exporters, importers and consumers of precious timber, marine and other valuable species can have confidence that they are using legally and sustainably harvested specimens. The new regulations will also help better ensure that illegal wildlife trade can be identified, intercepted, and responded to, including being treated as a serious crime, where appropriate.”

International trade in a range of rosewoods and ebonies from Asia, Central America and Madagascar now listed in CITES Appendix II will require that exports of these timbers be accompanied by CITES permits issued upon findings that there is no detriment to the wild populations.

The joint programme between CITES and the International Tropical Timber Organization (ITTO) will support the efforts of the countries concerned to strengthen their capacities to implement the Convention. Germany announced that it would contribute more funding to the EUR 7.5 million that has already been generously made available for a second phase of the programme, by the European Union, other Parties and the private sector.

Recognizing that implementation of the listings for the oceanic whitetip (Carcharhinus longimanus), scalloped hammerhead (Sphyrna lewini), great hammerhead shark (Sphyrna mokarran), smooth hammerhead shark (Sphyrna zigaena) and the porbeagle shark (Lamna nasus) will take some preparation, Parties decided that the entry into force of the inclusion in Appendix II should be delayed by 18 months, until 14 September 2014.

From that time onward, international trade in these species will need to be accompanied by CITES permits confirming that they are harvested sustainably and legally and the trade will also need to be reported to the CITES Secretariat.

The deadline for entering reservations on the new listings of species protected under CITES ended on Wednesday 12 June. Denmark on behalf of Greenland (porbeagle shark), Guyana (all 5 shark species and the manta rays), Japan (all 5 shark species), Iceland (porbeagle shark) and Yemen (hammerhead sharks) have entered specific reservations for some of the five commercially-valuable shark species and the manta rays now included in Appendix II.

China has advised the CITES Secretariat that, while it opposed the inclusion of these shark species in the CITES Appendices at CoP16 and continues to have concerns regarding implementation, in the spirit of international cooperation under CITES, with full respect for the decisions adopted at CoP16, China will apply the CITES rules to these species. Hence it did not enter any reservations.

At CoP16 Brazil announced its intention to host a regional meeting of Parties from the Caribbean and South America to address implementation issues prior to the sharks and rays listings entering into force. Ireland, on behalf of the European Union Member States and Croatia, announced an implementation package of EUR 1.2 million to be given to the CITES Secretariat to assist developing countries with implementation of CITES controls for newly-listed sharks and manta rays, and other marine species.

Discussions are already well underway with Brazil on the regional meeting and with the European Commission regarding how to best deploy the funds they have allocated.

CITES member States have also adopted robust enforcement-related decisions to fight wildlife crime and in particular tackling the elephant and rhino poaching and illegal trade crisis. New guiding principles for making scientific findings; as well as rules for determining the State responsible for issuing documentation for marine species harvested in international waters; assessing the impact of CITES decisions on the livelihoods of rural communities; and addressing potential conflict of interest that could affect members of the CITES scientific committees are also entering into force this week.

The new listings, Resolutions and Decisions are all available on CITES website at www.cites.org.  For more information, contact Juan Carlos Vasquez at +41 22 917 8156 or [email protected].
About CITES

With 178 Member States, CITES is one of the world's most powerful tools for biodiversity conservation through the regulation of trade in wild fauna and flora. Thousands of species are internationally traded and used by people in their daily lives for food, housing, health care, ecotourism, cosmetics or fashion.

CITES was signed in Washington D.C. on 3 March 1973. The 40th anniversary of the Convention was celebrated in March 2013 during the 16th meeting of the Conference of the Parties held in Bangkok, Thailand, from 3 to 14 March 2013.
Learn more about CITES by visiting www.cites.org or connecting to: