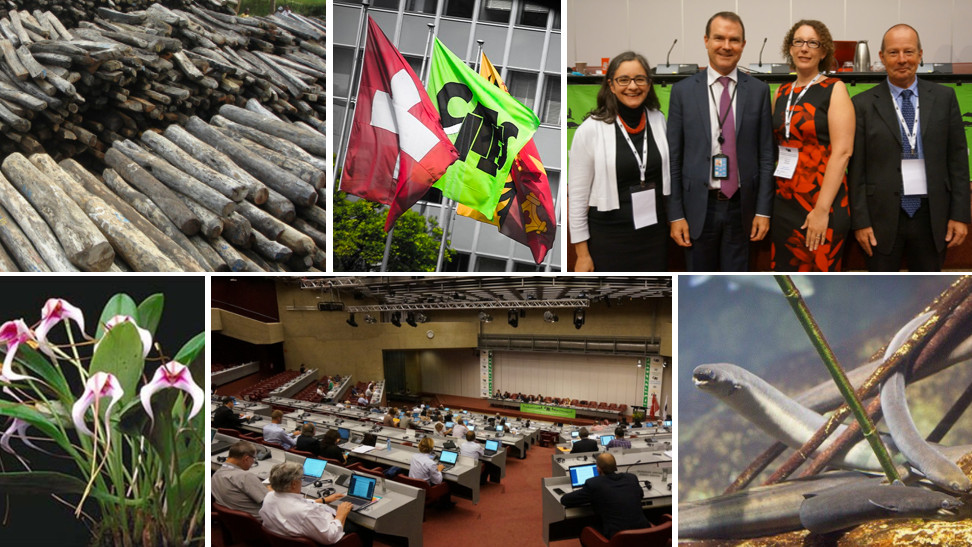 Geneva, 27 July 2017 – Close to 500 scientific experts, specialists and other observers, ranging from fisheries agencies and bird breeders to botanical gardens and musical instrument industries, gathered for the meetings of the CITES Animals and Plants Committees in Geneva, from 18 to 27 July 2017.

The Committees recommended specific actions on a wide variety of issues, including on: trade quotas for trade in the queen conch; the development of scientific non detriment findings (NDF) for sharks and rays; Rosewood timber species identification and trade challenges, especially regarding the international movement of musical instruments and items containing CITES-listed wood; a range of African tree species, including African cherry and East-African sandalwood; and on wild orchid management.

The Committees also began the implementation of two scientific review processes, proposing for further consideration of 25 species of animals and plants for the revised significant trade review process and 16 animal species for the new review of trade in specimens reported as produced in captivity or ranched.

“With the two compliance processes on Review of Significant trade and Captive Breeding, the Animals Committee can now, based on sound science, better ensure that trade in animal species is not detrimental to their survival,” noted Mr. Mathias Lörtscher, the newly-elected Chair of the Animals Committee.

Some of the other topics covered by the Animals and Plants Committees include: reviewing the progress towards the conservation and sustainable use of banggai cardinalfish, an ornamental fish endemic to Indonesia; agreement on global and regional efforts to study the population and trade status of the various eel populations; considering the possible implications of the Convention’s treatment of specimens produced from synthetic cultured DNA; addressing challenges on the identification of timber species; the collaborative CITES-CMS African Carnivores Initiative for animals, and recommendations on the consistent implementation of CITES measures on rosewood.

The Animals and Plants Committees also held a joint session to address matters of common interest, with the Opening Session attended by the Mr. Lörtcher and Ms. Adrianne Sinclair, newly elected Chair of the Plants Committee, as well as John E. Scanlon, CITES Secretary-General.

"The enthusiasm and interest in CITES reflected at CoP17 has carried over to our Animals and Plants Committees. Over the past two weeks, CITES scientific committees have advanced the revised review of significant trade in wildlife, launched a new process for reviewing trade in specimens reported as being produced in captivity or ranched, made important recommendations to the Standing Committee on how to interpret CITES new rosewood listings, and much more," said John E. Scanlon, CITES Secretary General.

Ms. Sinclair said, “the range of species covered and the open, collaborative discussions that took place at this meeting indicate the importance of the work being done, as well as the dedication of experts in bringing tangible results to our shared understanding of conservation and sustainable use to the trade of wild species.”

During the course of the Opening Ceremony for the joint session, the Secretary-General of CITES awarded the CITES Secretary-General’s Certificate of Merit to the Agri-Food and Veterinary Authority (AVA), which is the CITES Management Authority of Singapore, for its role in recognition of the great perseverance it demonstrated in securing successful convictions for illegal timber trade of CITES-listed rosewood (Dalbergia spp.) logs in 2014.

"CITES Committees do extraordinary and critical work, with members serving in an individual capacity. We thank the Committee members, our two new Committee Chairs, and all observers for giving CITES the benefit of their time and expertise. This work brings sound science to CITES decisions makers, in support of well informed decisions, noting the supreme decision making role of the Parties through the Conference of the Parties and Standing Committee," added Scanlon.

The next meetings of the Animals and Plants Committees will also be held in Geneva, in July 2018, with the CITES Standing Committee to meet in Geneva in late November, 2017.

Photos from the meetings are available at CITES Flickr page

IISD ENB Coverage of the meetings.