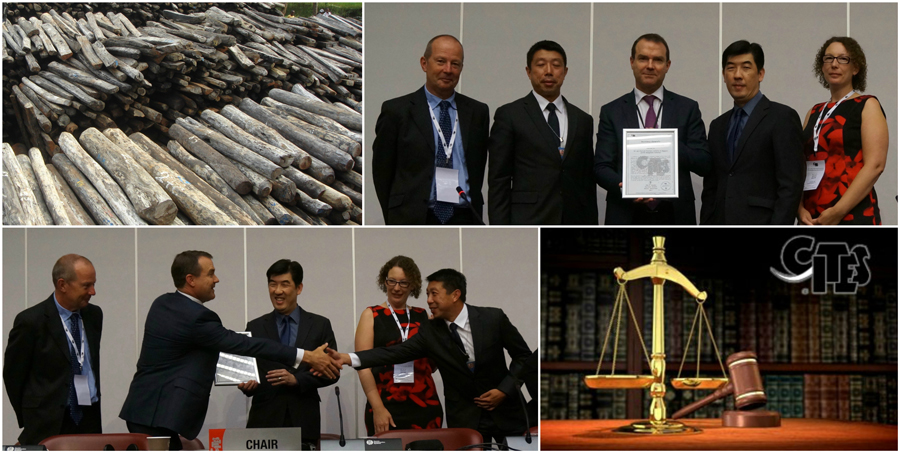 Geneva, 22 July 2017 - The Agri-Food and Veterinary Authority (AVA) of Singapore was today awarded with a Certificate of Commendation by the Secretary-General of the Convention on International Trade in Endangered Species of Wild Fauna and Flora (CITES). The CITES Secretary-General’s Certificate of Commendation formally recognizes exemplary enforcement actions, and was awarded to AVA in recognition of the great perseverance it demonstrated in securing successful convictions for illegal timber trade following the seizure of an illegal shipment of 3,235 metric tonnes (29,434 pieces) of CITES-listed rosewood (Dalbergia spp.) logs, on 14 March 2014. The market value of the logs was estimated to be in excess of USD 50 million.

Following the seizure, the AVA initiated a criminal case against the company that was identified as the consignee of the rosewood, and its managing director. The director and the company were prosecuted for importing a CITES-listed species into Singapore without the requisite CITES permit. The accused argued that the shipment was not “imported” into Singapore but merely “in transit” to another country, and that as such, different regulatory requirements applied. The accused company and its director were subsequently acquitted twice by a District court, but AVA persisted. After filing two appeals the High Court of Singapore, in March 2017, ruled that the charges brought against the accused had been proven beyond reasonable doubt. The High Court reversed the orders of acquittal and the managing director was sentenced to 3 months imprisonment and the maximum fine of SGD 500,000, and the company was sentenced to the maximum fine of SGD 500,000. The High Court also ordered that the rosewood logs be forfeited to the Government of Singapore.

Speaking at the award ceremony, Secretary-General John E. Scanlon said: “This case represents an excellent example of persistence paying off with the authorities in Singapore securing convictions against those involved in the illegal trade in CITES-listed specimens. The efforts by Singapore’s CITES Management Authority, the AVA, are testament to the outstanding work being done in Singapore to combat wildlife and forest crime. These convictions send a clear message that wildlife crime will not be tolerated in Singapore, and that those involved will be brought to justice.”

The Certificate was accepted by AVA Director-General Dr. Yap Him Hoo, who said: ”Singapore is honoured to receive the CITES Certificate of Commendation and would like to thank the CITES Secretariat for its strong support and assistance in our investigation of the rosewood case. Singapore has zero tolerance on the use of Singapore as a conduit for wildlife trafficking and timber smuggling. We adopt a multi-prong and whole-of-government approach underpinned by a robust enforcement regime to deter illegal wildlife trade. Besides rosewood, Singapore has also successfully made a number of seizures such as ivory, rhinoceros horns, pangolin scales, tortoises and turtles. The timely sharing of intelligence and information, international collaboration and cooperation between wildlife enforcement agencies and perseverance are important elements in combatting the illegal wildlife trade.”