Winning stories about jaguars, leopards, lions, pumas, tigers and more will hit the big screen and your mobile devices when the world celebrates World Wildlife Day 2018! 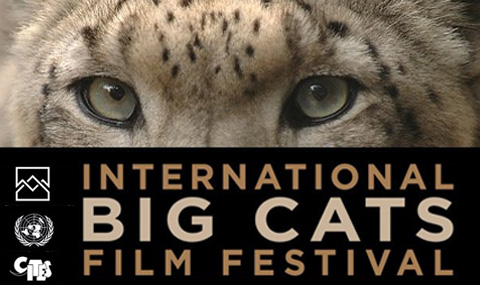 Geneva/Jackson Hole, Wyo., U.S., 9 February 2018 – Over the past century, the world has been losing the planet’s majestic big cats at an alarming rate. These iconic predators, the challenges they face, and how these challenges can be met, will be in the spotlight through the 16 films chosen as finalists in the International Big Cats Film Festival.

The Secretariat of the Convention on International Trade in Endangered Species of Wild Fauna and Flora (CITES) and the Jackson Hole Wildlife Film Festival have announced the International Big Cats Film Festival finalists based on the preliminary judging in the film festival, which is being organized as part of the global celebration of World Wildlife Day 2018 under the theme “Big cats: predators under threat”.

The judges – professional filmmakers, big cat biologists and stakeholders from around the world – chose the finalists from more than 200 entries in six categories: Issues and Solutions, Conservation Heroes, People and Big Cats, Science and Behavior, Micro-Movie, and Local Voices.

The full list of finalists is below. Winners will be announced at U.N. Headquarters in New York at a high-level event on 2 March. Both winners and finalist films will be subsequently showcased extensively to raise global awareness of the critical challenges facing big cat species at community screening events presented by partners throughout the world.

John E. Scanlon, Secretary-General of CITES, said, “A crisis can still be averted if we take action now and we are most grateful to all the film makers for submitting their wonderful works.   By using the power of media, we can catalyze a groundswell of support for big cats to help make sure they survive in the wild. On 3rd March 2018, World Wildlife Day, let’s make sure that all of us – no matter who we are or where we are – give big cats the special attention and the big support they deserve!”

Big cats are among the most widely recognized and admired animals across the globe. However, today these charismatic predators are facing many and varied threats, which are mostly caused by human activities. Over the past century, we have been losing big cats at an alarming rate due to loss of habitat and prey, conflicts with people, poaching and illegal trade. For example, tiger populations plummeted by 95 percent over the past 100 years and African lion populations dropped by 40 percent in just 20 years. A range of measures are underway to arrest this decline, but more needs to be done.

In an effort to reach as wide an audience as possible, the expanded definition of big cats is used for World Wildlife Day 2018 and the film festival, which includes not only lions, tigers, leopards and jaguars – the four largest wild cats that can roar – but also cheetahs, snow leopards, pumas, and clouded leopards. Big cat species are found in Africa, Asia, and North, Central and South America, representing a virtually global distribution.

Jackson Hole Wildlife Film Festival’s (JHWFF’s) programs promote public awareness and stewardship of wildlife and wildlife habitat through the innovative use of media. Since 1991, its annual conferences draw together international leaders in science, conservation, broadcasting and media. For three days in 2017, committed wild cats advocates convened for the Jackson Hole Conservation Summit (24-26 September), to share resources and strategies, address critical challenges and brainstorm innovative approaches for collaboration. They joined 650+ of the world’s most influential filmmakers and commissioners at the Jackson Hole Wildlife Film Festival to celebrate the world’s finest nature programming and explore innovative ways to integrate media centrally into the battle against global wildlife crime.