Eighteenth meeting of the Conference of the Parties to CITES 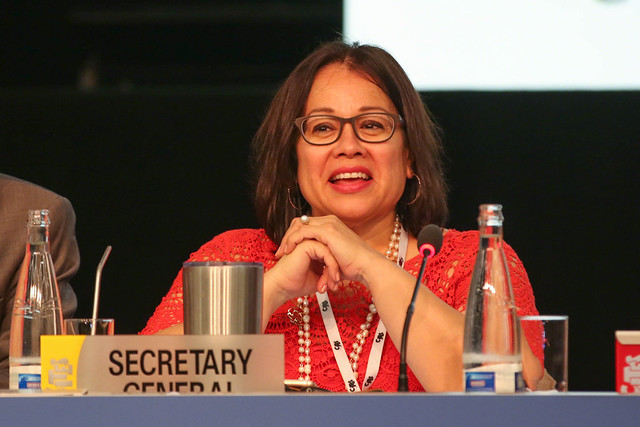 It was a remarkable experience for me to be here at my first CITES COP as Secretary-General.  We had an enormous agenda at COP18, and there is so much I could say about what we have accomplished. But in the interest of time, I would like to highlight just several broad accomplishments that I believe will help to shape our work over the years to come.

First, you put our 45-year-old Convention on a much stronger footing for the future

By adopting the CITES Strategic Vision Post-2020, the Parties have confirmed their collective view that CITES must be a leader in promoting transformative change in wildlife conservation and management. Our work must contribute to environmental, economic and social sustainability. The Vision also recognizes that we have a critical role to play in advancing the achievement of the 2030 Sustainable Development Goals.

Many of the resolutions that have been adopted here in Geneva will strengthen the capacity of Parties to implement the Convention. There will be greater support to enable CITES Management Authorities to ensure that wildlife trade is sustainable, legal, traceable. Decisions on the Compliance Assistance Programme and the continuation of the National legislation project are excellent examples of the kind of assistance that countries urgently need in order to comply fully with the Convention.

CITES Parties also reached out to better engage local and indigenous communities and to recognize their need for adequate incomes and livelihoods. These communities live on the frontlines of wildlife conservation and sustainable management. Without them, CITES will struggle to succeed. Over the course of a full day, over 100 Parties and observers took the floor on this issue. We saw a wide range of differing views, so Parties will begin considering how to best engage indigenous peoples and local communities in CITES decision-making and implementation. The aim is to better achieve the objectives of the Convention while recognizing the contributions of these communities.

Second, you expanded your capacity to fight illegal trade

Illegal traders remain a force to be reckoned with. And as with most aspects of modern life, wildlife crime is moving on-line at a rapid pace.

COP18 recognized these challenges. For example, you adopted decisions on strengthening enforcement efforts for tortoises and freshwater turtles. You will also support efforts to tackle illegal trade in the sub-regions of West and Central Africa. This illegal trade affects elephant ivory and species such as pangolins, parrots and rosewood. Another important decision was to establish the CITES Big Cat Task Force with a mandate to improve enforcement, tackle illegal trade and promote collaboration on conserving tigers, lions, cheetahs, jaguars and leopards.

The conference recognized the progress being made by the International Consortium on Combating Wildlife Crime. The Consortium plays an invaluable role in assisting Parties to implement the Convention and combat wildlife crime. Strengthening collaboration among enforcement agencies and Wildlife Enforcement Networks is vital to future success, and I applaud such efforts.

CoP18 also demonstrated the will of Parties to work together across the range, transit and destination countries. For example, we learned that the most recent global wildlife enforcement operation, codenamed Operation Thunderball, involved 109 countries. It resulted in over 1,800 seizures across all continents, and the arrest of close to 600 suspects. Such successful wildlife law-enforcement operations demonstrate what can be achieved when CITES Parties work together to crack down on wildlife crime.

We clearly need to do more, however, to assist countries to strengthen their criminal justice systems. We also need to follow through on the decisions on combating wildlife crime linked to the Internet, which in today’s digital world seems set to increase.

I am pleased to note that CITES has now started to open a new digital front, both to more effectively regulate legal trade and to combat illegal trade. The CoP approved joint work with the World Customs Organization on exchanging electronic CITES permits with Customs. This will lead to more efficient border controls using modern, technology-based approaches, such as electronic risk management and targeted inspections.

I encourage all Parties to make use of the Guidelines on how to combat wildlife crime linked to the Internet once they are finalized and launched at the upcoming INTERPOL Wildlife Crime Working group in November.

Finally, I would also like to highlight the launch of the First High-level Conference on Illegal Wildlife Trade in the Americas, which will take place in just two months.

Third, you broadened the role of Appendix II in promoting sustainable development

Here at COP18 you adopted 46 proposals to amend the Appendices, adding by our count 93 new species.  We saw a mix of Appendix I and Appendix II listings.

The Appendix II listings reveal some likely further directions for CITES. CoP18 has confirmed that the Parties increasingly rely on the Convention to help ensure the sustainability of marine species, including those that have high value in commercial fisheries.  While other international mechanisms also support the management of marine species, CITES can serve as a vital safety net.

The three shark proposals, submitted by a record number of Parties, brought 18 additional shark species under the CITES trade regulation regime. The COP also recognized some of the implementation challenges that these listings pose, and we are committed to helping Parties to successfully apply CITES trade permits. You also adopted decisions and resolutions on sharks and rays, eels, queen conch, marine turtles, precious corals, sturgeons and seahorses. I have taken note of your instructions to examine the trade in live ornamental marine fish to assess what role CITES could or should play in regulating this trade.

We also saw the continued listing of precious tropical timbers on Appendix II based on proposals from range states in Latin America and Africa. These listings confirm that Parties are seeking greater support and assistance from CITES for managing and controlling trade in these valuable resources. COP18 also recognized the great value of medicinal and aromatic plants and the need for CITES to address them.

I am also pleased to observe that, as stated by the International Tropical Timber Organization, the collaboration between CITES and ITTO has been, quote, a ‘shining example of interagency cooperation’. Meanwhile it is clear that more needs to be done to fight illegal trade in CITES-listed timber from Africa.

Many other species were addressed by the Conference. Although there is often less public awareness of the world’s continuing loss of amphibians, reptiles, birds, and smaller mammals, the survival of these species is essential for the fabric of life on Earth. We must dedicate as much attention to such species as we do to high-value fish and timber and large, charismatic mammals.

Finally, it is always a pleasure to recognize a great CITES success story – the revival of vicuña populations through sustainable use in Bolivia, Peru and parts of Argentina. Continuing this trend, COP18 downlisted a regional vicuña population in Argentina from Appendix I to Appendix II. The American crocodile population of Mexico, another conservation success, was similarly downlisted in recognition of the population’s continued recovery. Such stories demonstrate the power of CITES.

There is so much more that I could say, but let me remark again on the need to provide a space for countries to find common goals for sustainable development. In this way it can be possible to assure the long term conservation of the world’s endangered species. There is much work to be done in the intersessional period, so that 3 years from now there will be more issues in common than differences amongst the guardians of our wildlife. The Secretariat stands ready to help find solutions with Parties and our partners that support the implementation of the Convention.

May I now conclude by returning to where I began two weeks ago:  by thanking the Government of Sri Lanka for its early commitment, the Government of Switzerland, the European Union, Germany, Norway and Croatia for stepping in so generously to help us in our moment of need, all of the Parties who contributed to the Sponsored Delegates Project, the fantastic and effective Chairs of the Committees, the Chair and Alternate Chair of the CoP, the Chairs of the Credentials and Budget committees and to the budget committee for recognising our financial and human resource needs, to Costa Rica for their generous offer to host the CoP for the second time after hosting CoP2 in 1979, thanks to my wonderful colleagues in the Secretariat who work so hard every day, and a special thanks to Victoria Zentilli and Tom De Meleunaer who are servicing their last CoP before their retirement, Victoria who has worked with the Secretariat since 1979 and Tom since 2001, please stand Tom and Victoria to be recognised!

Also thanks to the interpreters, the technical and support staff at Palexpo and vendors, especially to Kai, Christine and Regula, for ensuring everything ran perfectly, to UN security with Christophe and his team, the amazing volunteers and staff from partner organizations who joined our team, and of course to you, the Parties and Observers, that together make CITES a priceless jewel in the crown of multilateral environmental agreements. Please allow me a a few minutes, Mr. Chair, to offer a few gifts to recognise the service of the CoP officers and the hard work of the volunteers.