In a packed agenda for this week-long meeting, the CITES Standing Committee will discuss progress made in: tackling poaching of African elephants; adopting tighter wildlife laws; detecting illegal trade in pangolins, the world’s most trafficked mammal; verifying Japan's introduction of sei whales from the high seas; and a broad array of other wildlife trade-related issues, including compliance of the Convention in Lao PDR, the Democratic Republic of the Congo and Guinea, implications of cultured and synthetic DNA for making bio-engineered wildlife products such as rhino horn, a seizure of nearly 16,000 live tortoises and turtles in India; and more 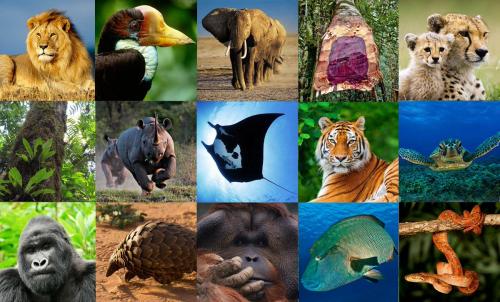 Geneva, 23 November 2017 – The week-long 69th meeting of the CITES Standing Committee starts Monday in Geneva with a packed agenda of 76 items that address the most pressing wildlife trade issues affecting the survival of a myriad of wild plants and animals. A record number of 600 participants from all over the world have registered to attend.

CITES Secretary-General, John E. Scanlon said: “This is the first meeting of the Standing Committee following the largest World Wildlife Conference ever - CoP17, held last year in Johannesburg. With many of the ground-breaking decisions and resolutions adopted at CoP17 being fully embraced by the new UN General Assembly resolution on Tackling illicit trafficking in wildlife adopted two months ago, it is now for the Standing Committee to review how the 183 Parties to CITES and its Secretariat are progressing with the implementation of these decisions and resolutions, and to determine what further steps are necessary”.

Matters to be discussed include:

Tackling the rosewood crisis in Africa and Asia

A number of CITES-listed species have very high monetary value, and this applies in particular to precious timbers, hundreds of which were included in CITES Appendix II at CoP17. Ensuring the sustainable management of and trade in these species is challenging. Additionally, since CoP17, information about large-scale illegal timber trade continues to come to the attention of the Secretariat, in particular with regards to rosewoods, ebonies and palisanders from Africa and Southeast Asia. This highlights the continued urgent need for enhanced enforcement efforts to address this illegal trade and to get legal trade onto a sustainable footing.

Thousands of tonnes of precious rosewood have been seized from illegal loggers in Madagascar. The control and disposal of the vast stockpiles of highly valuable rosewood cut from Madagascar’s rainforests has been a huge challenge. A CITES export ban has been in place since 2010, but Madagascar has now asked for permission from the Committee to export thousands of tonnes of rosewood.

The illegal logging and trafficking of CITES Appendix II-listed Siamese rosewood is causing the serious decline of the species in the wild and damaging the ecological integrity of Southeast Asian forests.  According to the World Wildlife Crime Report, 798 metric tonnes of Siamese Rosewood were seized during 2005-2015.

Saving totoaba and vaquita from extinction

Totoaba and vaquita are a fish and a porpoise found in the waters of the northern Gulf of California (Sea of Cortez). International trade in both species are prohibited under CITES since 1970s. Today, the vaquita, one of the rarest marine mammals, is on the verge of extinction as a result of bycatch to meet the continuing illegal demand for totoaba swim bladders. Scientists believe there are fewer than 30 vaquitas left; one died earlier this month in a rescue operation.

The Standing Committee will review reports on progress made in public awareness raising, demand reduction, law enforcement, and cooperation among key countries as called for by CITES CoP17 decisions. The report on the workshop between China, Mexico and the United States will be reviewed.

Illegal trade in pangolins continues despite the full protection from CITES being agreed at CoP17. Available information on illegal trade dynamics demonstrates that illegal pangolin trade involves, or at least implicates, 55 Parties, including African and Asian range States and non-range States.

While enforcement measures demonstrated by many countries are commendable, significant room for improvement continues to exist in terms of both legalisation and law enforcement.

Data shows that a total of 1,557 seizures involving an estimated 192,576 pangolins took place between 1999 and 2017. Data reflects that illegal trade in pangolins significantly escalated in recent years, with the majority of these seizures (approximately 94%), having taken place from 2007 onward.

Members of the Standing Committee will consider for the first time information concerning Japan’s “scientific research programme” in sei whales, one of the world’s fastest cetaceans. The Committee will discuss whether the introduction from the high seas of sei whales is conducted in accordance with CITES provisions regulating non-commercial trade in Appendix I species.

Concerns of the musical instrument sector

As of 2 January 2017, more rosewood species (Dalbergia), bubinga (Guibourtia) and kosso (Pterocarpus erinaceus) have been added to CITES Appendix II, which means the cross-border movement of musical instruments containing such wood will have to be accompanied by appropriate CITES permits. This has caused some concerns in the musical instrument industry, with some companies saying that they will no longer use such wood in their products.

The CITES Plants Committee has proposed interim interpretations of definitions of certain terms used in the listings, including the interpretation of the term “non-commercial” so that a universally agreed procedure to allow such movement can be simplified before Parties meet at CoP18 in Sri Lanka to review the definitions.

Progress made in tackling poaching of African elephants

There has been a steady decline in poaching levels since its peak in 2011, and the analysis by the CITES Monitoring the Illegal Killing of Elephants (MIKE) for 2016 concludes that the overall poaching trends of African elephant have now dropped for five consecutive years and in Eastern Africa to pre-2008 levels. Although progress is being made, illegal killing continues at unsustainably high levels that exceed the natural rate of population increase, and a lot of hard work remains to be done, especially in Central and West Africa.

A report prepared for CoP17 identifies 27 Parties as either of primary concern (9), secondary concern (9) or importance to watch (9). These include Parties that were, at the time of CoP17, already participating in the NIAP process, as well as possible new Parties to include in the process.

The present meeting will review progress with NIAP implementation, consider if additional Parties should be included in the process, and if any further measures are needed, including compliance measures.

The reduction in the number of rhinoceroses poached in South Africa is a positive sign, but could result in an increase in poaching in other rhinoceros range States, as criminals seek out locations where rhinoceroses might be easier to target.

Progress made by key Parties affected by rhinoceros poaching and rhinoceros horn trafficking will be reviewed at the meeting.

The Review of Significant Trade process is an important science-based compliance mechanism in CITES to ensure that international trade in the 36,000 species that are included in CITES Appendices is at sustainable level without jeopardizing the survival of the species in the wildlife. Species to be discussed at the meeting include hippos from Mozambique, scorpions and reptiles from Togo, pythons from Malaysia and seahorses from Thailand.

The CITES requirement on adequate national legislation to implement and enforce the Convention is an example of the unique strength of this global treaty with 183 Parties. Failure to enact sufficiently strong legislation to implement the Convention will be subject to the Committee considering taking compliance measures, i.e. possible recommendation to suspend trade in some or all CITES-listed species.

Encouraging progress has been made by a number of Parties towards the adoption of enhanced legislation to regulate international legal trade in wildlife and to stamp out illegal trade. Since CoP17, 11 countries have adopted new legislation and submitted them to the CITES Secretariat for analysis. Legislation of 6 of these Parties, namely Chile, Guinea-Bissau, Guyana, Israel, Kuwait and Morocco, have now been moved to the top category under CITES.

The Standing Committee will for the first time take on the technical and regulatory challenges of controlling specimens produced from synthetic or cultured DNA, such as rhinoceros horns, elephant ivory, tiger bone and pangolin scales.

Synthetic biology - a discipline that utilizes chemically synthesized DNA to create organisms that address human needs - is developing rapidly, with billions of dollars being invested annually. A number of companies and researchers might be developing or have developed bioengineered forms of life and wildlife products, including rhinoceros horn and rhinoceros horn powder.

While scientific processes through which these products are being developed may vary, the products appear to be genetically similar or identical to real rhinoceros horn. How the CITES trade control regime responds to the cross-border movement of such products will be subject of reflection by the Committee.

The meeting will also consider the situation in Lao PDR regarding tiger farms, domestic ivory markets and other wildlife matters and decide whether the reported remedial actions are sufficient or further compliance measures are required to ensure that this country comply with its obligations under the Convention.

A great diversity of other species, such as Asian big cats, African lions, cheetahs, great apes, helmeted hornbills, tortoises and freshwater turtles, rhinos, sharks and rays, sturgeons and paddlefish, are also on the agenda. The Committee will also review capacity-building needs, compliance matters, combating wildlife cybercrime, demand reduction, engagement of rural communities in the CITES processes, introduction from the sea, livelihoods, transport of live specimens and periodic review of the Appendices.