Geneva, 24 October 2017 – The latest CITES report on the status of elephants and ivory trade reveals that in 2016, the overall downward trend of elephant poaching in Africa continues, with significant declines seen in East Africa. At the same time, 2016 records the highest level of seizures of illegally traded ivory by weight since commercial international trade was banned by CITES in 1989.

The announcement is based on new reports of the CITES MIKE Programme (Monitoring the Illegal Killing of Elephants) and the Elephant Trade Information System (ETIS), and updates on the conservation status of elephants provide by the International Union for Conservation of Nature (IUCN). They will be discussed by the CITES Standing Committee at its forthcoming 69th meeting in November 2017.

The two CITES programmes base their findings on unique first-hand information on the illegal killing of elephants collected by ranger patrols in over 60 MIKE sites across Africa, and government-reported ivory seizures. To complement their analyses, IUCN provided the latest information on the conservation status of African and Asian elephants.

John E. Scanlon, CITES Secretary-General, said: “Eastern Africa has been badly affected by the surge in poaching over the last ten years, and has experienced an almost 50% reduction in elephant population. There has however been a steady decline in poaching levels since its peak in 2011, and the analysis from 2016 concludes that overall poaching trends have now dropped to pre-2008 levels. This shows us what is possible through sustained and collective front-line enforcement and demand reduction efforts, coupled with strong political support.” 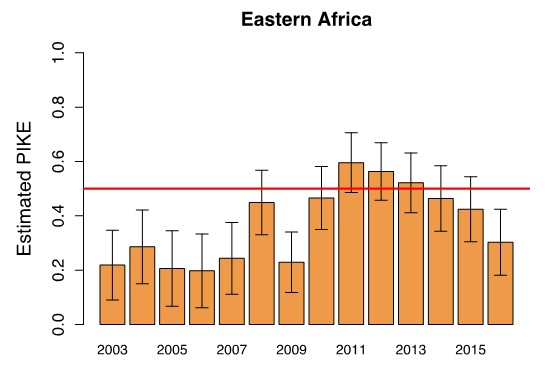 The MIKE analysis shows which MIKE sites are heavily hit by elephant poaching, but also where illegal killing is reducing. The number of elephant carcass records from three MIKE sites in Tanzania, for example, dropped by 55% in 2016 compared to 2015, and a similar decline was recorded from a site in Kenya. While Tanzania remains the sub-region's stronghold for elephant populations in the sub-region, elephant numbers recorded in Uganda, Kenya and Rwanda are also stable or on the rise.

In southern Africa, Botswana still maintains by far the largest elephant population of any country in Africa. Elephant numbers in Namibia and South Africa have also increased according to the latest conservation status data on African elephants, based on a new full African Elephant Status Report (2016), the first of its kind since 2007.

The news is not so positive for Central Africa: where dramatic losses of elephant populations have been reported over the last 10 years, and levels of illegal killing remain very high.

It is estimated by IUCN that the population of African elephants declined by 111,000 over the past ten years. The overall trends in the poaching of African elephants show that the sharp increase in the levels of illegal killing of elephants witnessed since 2006, and peaking in 2011, was first halted, then stabilized, and is now in decline, but at levels that remain too high when viewed continent-wide, with overall elephant population likely to have declined in 2016.

In contrast with the gradual downward trend of elephant poaching observed since 2011 by MIKE, the ETIS analysis shows that 2016, when nearly 40tonnes of ivory were seized, is the year in which the greatest number of illegal ivory seizures was reported. The overall weight of seized ivory in illegal trade is now nearly three times greater than what was observed in 2007.

“The upward trend in the amount of illegal ivory seized as compared to the gradual downward trend observed for elephant poaching since 2011 may reflect a scaled up enforcement effort by customs and police and a more vigilant transport sector. There could also be time lags between poaching elephants and trafficking their ivory, or the entry into the illegal trade of ivory stockpiles,” said Scanlon.

“But the spike in seizures of illegally traded ivory in 2016 may also be an indication that ivory trafficking has been influenced by the prospect of greater controls, the imminent domestic ban in several countries and anticipation of continued drop of price.  As a result, international syndicates behind this poaching and smuggling may be involved in a panic sell-off as they realize that speculating on extinction was a bad bet, with the an ever increasing risk of getting caught”, he added.

The United States announced its near total ban on domestic trade in ivory just before CoP17. Since CITES CoP17, China (including Hong Kong SAR) has announced the closure of domestic ivory markets within a specific time frame, and the United Kingdom has expressed its intention to do so. Recent reports from non-governmental organizations also claim that the price of ivory has plummeted over 50% in the past few years1.

As observed by the first World Wildlife Crime Report published by the United Nations Office on Drugs and Crime (UNODC), a close partner of CITES in combating wildlife trafficking (see ICCWC), there is evidence that raw ivory tusks that have entered into the destination markets in Asia already exceeded the level of consumption. The incongruity between the amount of ivory being generated and the demand has long been observed.

These somewhat conflicting phenomena are occurring at a dynamic time with governments making unprecedented efforts to implement National Ivory Action Plans (NIAPs) under CITES in 20 countries; more political commitments and collective international efforts generated in the past few years, including by the transport sector; additional funding for combatting illicit wildlife trade crime, and greater than ever enforcement efforts on the front line, including tightened anti-poaching efforts and the use of new technologies to detect and interdict illegally traded ivory.

In the meantime, responsive adaptations and developments by wildlife traffickers in the illegal trade seem to be occurring. For example, although 2016 sets the record in the number of large scale seizures and overall weight, it is also the year with the lowest average weight per seizure recorded in the past six years. Explanations could include a reduction of the size of large shipments in an attempt to avoid economic losses when seized, a greater diversification in the types of ivory illegally traded, and the modes of transport applied, and local market developments.

Further, there is a growing concern and increasing evidence of ivory processing in Africa by Asian nationals for export to Asia. This involves smaller volumes of worked ivory carried through air check-in and carry-on luggage or couriers. It could potentially pose a serious threat, and adequate enforcement efforts to stem this illegal flow are to be deployed.

Also, an increasing number of elephants are being illegally killed through human elephant conflicts, which will become of increasing concern over coming years.

“The global collective effort that is underway is starting to reap positive results, but we are certainly not there yet. We must persist and drive home the advantage we have while the political momentum is with us and the financial and technical support that goes with it. And while the African elephant is seeing some gains it is not across all regions, with some local populations still under serious threat, and other species are now being increasingly targeted by transnational criminals, especially high value timber,” concluded Scanlon.

1According to surveys commissioned by Save the Elephants and TRAFFIC, among others.