A focus on the front lines

Geneva, 14 July 2014 –With record numbers in attendance, the conservation and management priorities for wild plants and animals took centre stage at the 65th meeting of the Standing Committee of the Convention on International Trade in Endangered Species of Wild Fauna and Flora (CITES), from 7 to 11 July, in Geneva.

“The text of the Convention provides the framework within which CITES operates. Further to this, more than 80 Resolutions and a large number of Decisions adopted by the CITES Conference of the Parties guides the effective implementation of the Convention, and specify what needs to be done. It is crucial that the implementation of these Resolutions and Decisions better translate into national law, enforcement and conservation efforts, for us to achieve legal, sustainable and traceable trade, and to combat illegal trade effectively. Countries need to again look at their permitting systems and legislation, enforcement responses, how CITES specimens are confiscated and disposed of, and what punitive measures are taken against those who are perpetrating wildlife crimes,” said Øystein Størkersen, CITES Standing Committee Chair. 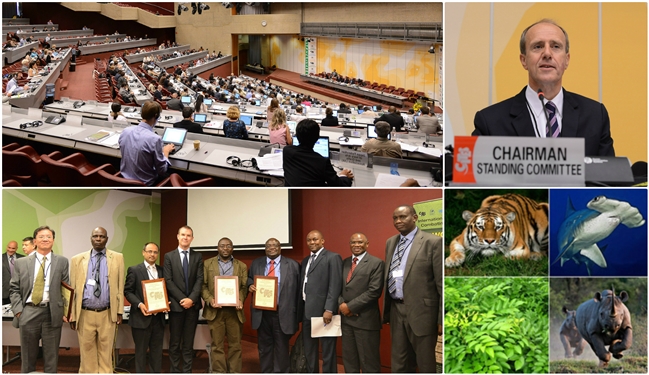 With 180 Member States, CITES remains one of the world's most powerful tools for biodiversity conservation through the regulation of trade in wild fauna and flora. Thousands of species are internationally traded and used by people in their daily lives for food, housing, health care, ecotourism, cosmetics or fashion.
At the annual Standing Committee, CITES reviews how far states have got since major decisions were taken and determine the next steps. Compliance measures and review mechanisms available under CITES are unique to this Convention and include the legal authority to completely suspend country trade in a species or in all species of wildlife.  The Standing Committee meets every year to oversee the implementation of rules for international trade in protected wildlife agreed between the 180 CITES member States, which meet once every three years - the last meeting being held in Bangkok in March 2013.
CITES regulates international trade in over 35,000 species of plants and animals, including their products and derivatives, ensuring their survival in the wild with benefits for the livelihoods of local people and the global environment. The CITES permit system seeks to ensure that international trade in listed species is sustainable, legal and traceable.   CITES was signed in Washington D.C. on 3 March 1973.
Agenda and reports for the Standing Committee meeting:
/com/sc/65/index.php
http://www.twitter.com/citesconvention
http://www.youtube.com/citesvd
http://www.facebook.com/CITES
http://www.flickr.com/cites
CONTACTS:  Juan Carlos Vasquez: +41 22 917 8156 or juan.vasquez [at] cites.org, @jcvcites, @citesconvention, Samantha Bolton cell: +41 79 239 2366 or Samantha.bolton [at] cites.org @sambolton007

Roddy Gabel - Head of U.S. Delegation / Chief, U.S. CITES Management Authority
“The 65th meeting of the CITES Standing Committee has set the stage for further progress on efforts to improve the effectiveness of the Convention and particularly to address the current wildlife trafficking crisis, not only for iconic species like elephants and rhinos, but for lesser-known species like pangolins, which are no less deserving of our attention.  The United States is encouraged by the high-level attention to wildlife trafficking by the CITES Parties as well as the level of cooperation at this meeting.”
William Kiprono, Director General, Kenya Wildlife Services, Kenya
“As one of the eight countries that were requested to do so, at this meeting, we provided feedback on the activities we have undertaken to implement our national ivory action plan. Amongst a variety of other things, we have for example recruited about 600 elite rangers, and we also revised our national legislation, which now make provision for strong deterrent penalties.
Some people still think that a tusk just falls off an elephant like a feather from a bird. They don`t know what is happening on the ground and how these animals are being slaughtered to satisfy illegal markets.
We need to come together to provide resources to law enforcement. Criminals have to be treated as such – and especially the big bosses who control the global crime networks for ivory and other protected wildlife. We cannot compromise with criminals. There is a lot of positive progress being made, but our generation is the last front.
If the rangers are not there, there will be no wildlife left in our countries. This is why we need to keep up the fight and to enforce the law on all fronts: where the animals live, in the transit countries and in the countries where they are being consumed. In Africa, our heritage, our wildlife and the future of our beautiful countries are at stake.”
Regarding rosewoods, palisanders and ebonies quote from China
“As a potential import country, China has all along followed the Decision 16.152 on Malagasy ebonies,  palisanders and  rosewoods and the related action plans as well as the zero export quota established by Madagascar.
China CITES Management Authority, jointly with China’s General Customs Administration, issued a gazette in April 2013, officially announcing that the import of specimens of timber species in CITES Appendix-II adopted at CoP16, including Dalbergia and Diospyros of the populations of Madagascar, shall be subject to a CITES import permit for customs clearance as of 12 June 2013. As for Hong Kong Special Administrative Region, the incorporation of amendments to the CITES Appendices into its legislation are now at an advanced stage and the new control is expected to come into effect in November this year. The Hong Kong authorities will continue to render great enforcement effort in endangered species including timber species.
Customs and border police in China have placed endangered timber species, especially timber shipments coming from Madagascar, on the priority area of routine enforcement. In mid June this year, the CITES MA convened the National Workshop on CITES Implementation and Enforcement for the Import of Endangered Timber Species, in which customs representatives from main ports for timber import participated, aiming to further raise their awareness and enforcement capabilities.  A certain number of training seminars targeted at timber enterprises on the trade control of endangered timber species have been organized, and risk reminders have been released repeatedly, through which new listings of timber species in CITES control and China’s import policies were widely publicized”.
Coviello Giovanni, Italy, Presidency of the EU
“The European Union welcomes the ambitious actions adopted by the CITES Standing Committee to combat the illegal trade in rosewoods, palisanders and ebonies from Madagascar. This important step should help ensure that Madagascar mobilizes the legislative and enforcement measures required to halt illegal logging and related illegal exports. We also encourage more cooperation between transit and destination countries, in particular to detect and seize illegal shipments coming from Madagascar.
It is estimated that illegal logging accounts for up to 30% of the global timber trade and contributes to more than 50% of tropical deforestation in Central Africa, the Amazon and South East Asia, which causes huge loss of landscape, vegetation cover and biodiversity. One of the direct environmental impacts of the illegal logging in Madagascar is the habitat destruction for many species, especially for endangered lemurs.
The EU is committed to combat illegal logging through the Forest Law Enforcement, Governance and Trade (FLEGT) process and the EU Timber Regulation.  The Italian Presidency of the European Union has high hopes that the full implementation of CITES in Madagascar will lead to a more sustainable use of the natural resources.”