Geneva, 8 May 2013 – The Secretary-General of the Convention on International Trade in Endangered Species of Wild Fauna and Flora (CITES), John E. Scanlon, expressed his grave concern over the recent reports of the deteriorating situation in the Central African Republic. Information suggests that armed groups have entered and may have started to massacre forest elephants in a World Heritage Site located in the south-western corner of the country bordering Cameroon and the Republic of Congo.

According to the WWF and various media reports, a group of 17 armed individuals, some of them armed with heavy calibre rifles, entered the Dzanga-Ndoki National Park on 6 May 2013 and headed for the Dzanga Bai, locally known as the "village of elephants", a large clearing where between 50 and 200 elephants congregate every day to drink mineral salts present in the sands. 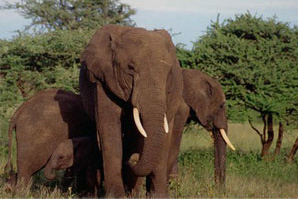 The Dzanga-Ndoki National Park is a site monitored through the CITES-led Monitoring Illegal Killing of Elephants (MIKE) and levels of poaching have generally been below average for Central Africa. The site is remote and has been relatively well protected and there have been no major poaching incidents until now.

The CITES Secretariat urged all governments of the region and relevant United Nations and other international bodies to take urgent action to prevent the massacre of the elephant population living in the park. CITES has also informed its partners in the International Consortium on Combatting Wildlife Crime (ICCWC) of the imminent threat and requested each one to reach out and inform their various networks.

"This is very worrying news since recent poaching incidents of elephants has been on a massive scale, reflecting a new trend across the African continent where well-armed poachers with sophisticated weapons decimate one of our most magnificent species, often with impunity. This imminent threat to elephants in a remote and relatively well protected area is of grave concern to CITES and I call on the international community to join forces and take coordinated action to avoid a new tragedy of similar proportions to the massive killing of elephants occurred in Cameroon in 2012," said CITES Secretary-General, Mr. John E. Scanlon.

Last month the park allegedly suffered repeated attacks during which equipment was looted from the administration buildings and facilities were destroyed. Welcoming a recent UNESCO statement Mr Scanlon added "The alarm sounded by UNESCO's Director General, Ms Irina Bokova, further reinforces our concerns about the links between illicit wildlife trafficking and regional security in parts of Africa". "The CITES Secretariat will continue to support authorities investigating and combatting the involvement of rebel militias in wildlife crime as may be required", he added.

CITES reported to the 16th meeting of the Conference of the Parties in Bangkok in March, on the increasing incidents of poaching in World Heritage sites across Africa. In August 2012, the Secretariat engaged in discussions with UNESCO to explore areas for increased collaboration between UNESCO and CITES, in particular with regard to elephant poaching and illegal ivory trade. Several conservation areas, including the Garamba National Park and Okapi Wildlife Reserve mentioned in CITES reports on illegal killing of elephants are UNESCO world heritage sites.

The strategic and operational decisions taken on enforcement matters at CITES CoP16 provide a strong basis for countries to take concrete action to put an end to the current high levels of illegal wildlife trade.

Range States are currently experiencing a serious spike in the illegal killing of African elephants and rhinos and the related illegal trade in ivory and rhino horn. Data compiled from the programme CITES Monitoring the Illegal Killing of Elephants (MIKE) suggests an ongoing increase in levels of illegal killing of elephants since 2006, with 2011 displaying the highest levels of poaching since MIKE records began in 2002. These findings are supported by information available from the Elephant Trade Information System (ETIS), which indicates that the amount of seized ivory has continued to escalate and is currently at its highest level in the 16-year period examined by ETIS.

The illegal killings of large numbers of elephants for their ivory are increasingly involving organised crime and in some cases well-armed rebel militias. For example, in Bouba N'Djida National Park, in northern Cameroon, up to 450 elephants were allegedlly killed by rebel groups from Chad and Sudan in February 2012. The poached ivory is believed to be exchanged against money, weapons and ammunition to support conflicts in neighboring countries. The Secretary-General expressed grave concern over this incident at the time and in response to this insurgence, the Government of Cameroon deployed up to 150 soldiers into the National Park in support of park rangers to put an end to the illegal killing. Another example of this type of poaching was the illegal killing of 22 elephants in the Garamba National Park, Democratic Republic of the Congo, in April 2012, apparently shot from a helicopter with a high level of marksmanship and in a single raid. The ivory was taken away.

Poaching levels increased in all African subregions, with central Africa continuing to display the highest levels of illegal killing in any subregion in Africa or Asia. Wildlife rangers who are serving in the front-line are often quite literally being outgunned, Wildlife crime has become a serious threat to the security, political stability, economy, natural resources and cultural heritage of many countries and that the extent of the response required to effectively address this threat are often beyond the sole remit of environmental or wildlife law enforcement agencies, or of one country or region alone.

This critical situation demonstrates the need of implementing the African Elephant Action Plan that was created under the auspices of CITES. An African Elephant Fund was launched last August at the 61st meeting of the CITES Standing Committee and is managed by the United Nations Environment Programme (UNEP).

CITES was adopted in Washington D.C. on 3 March 1973. The 40th anniversary of the Convention was celebrated in 3rd March 2013 which coincided with the opening of the 16th Meeting of the Conference of the Parties held in Bangkok, Thailand, from 3 to 14 March 2013.

Learn more about CITES by visiting www.cites.org   or connecting to: