CITES getting ready for sharks and rays

Press releases
Sharks
Twelve months before the entry into force of CITES regulations on shark and rays, the European Union
approves a 1.2 million euro project to ensure their effective implementation. Brazil, China, Germany, Japan
and the United States have also offered support and technical assistance.
Geneva, 14 September 2013 – The 178 Parties to the Convention on International Trade in Endangered Species of Wild Fauna and Flora (CITES) are preparing for the implementation of the shark and ray listings that they adopted at the 16th meeting of the Conference of the Parties (CoP16) in March 2013 in Bangkok, Thailand. 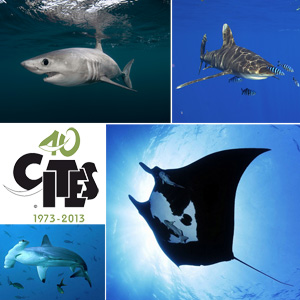