Primary source, transit and destination countries are requested to take
urgent measures to implement their plans by July 2014 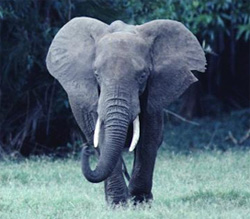 Geneva, 16 May 2013 – The Secretariat of the Convention on International Trade in Endangered Species of Wild Fauna and Flora (CITES) has received National Ivory Action Plans from the first group of countries identified as primary source, transit and import countries affected by illegal trade in ivory: China, Kenya, Malaysia, the Philippines, Thailand, Uganda, the United Republic of Tanzania and Viet Nam.

The plans were requested by the CITES Standing Committee last March as a response to the dramatic rise in the number of elephants poached for their ivory. The alarming statistics produced by the CITES programme for Monitoring the Illegal Killing of Elephants (MIKE) and the Elephant Trade Information System (ETIS, managed for CITES by TRAFFIC, a non-governmental organization) led to this request.

China, Kenya, Malaysia, the Philippines, Thailand, Uganda, the United Republic of Tanzania and Viet Nam submitted plans with time frames and milestones by the deadline of 15 May 2013 that had been set by the Standing Committee. These eight countries are requested to take urgent measures to put their plans into practice before July 2014, when the CITES Standing Committee will review their implementation. Each plan specifies activities in the areas of legislation and regulations, national and international enforcement, outreach and public awareness.

“Full implementation of the landmark decisions that CITES member States adopted by consensus last March to combat wildlife crime, together with the complementary decisions taken by the CITES Standing Committee, is key to winning the fight against illegal wildlife trade. The CITES Secretariat will continue to support CITES Parties in their efforts and to rally further political and financial support to assist them with on-the-ground implementation”, said Mr John E. Scanlon, CITES Secretary-General,.

The Secretariat will now share the plans with the Standing Committee and work closely with the countries concerned in monitoring their implementation, which may involve missions on site. In July 2014, the Secretariat will provide the Standing Committee with its evaluation of the activities conducted by each country, and recommend potential further measures to intensify efforts in critical areas.

The deliberations held in Bangkok last March, during the 16th meeting of the Conference of the Parties, also identified two additional groups of countries that need to adopt measures in the near future. The first group (Cameroon, the Congo, the Democratic Republic of the Congo, Egypt, Ethiopia, Gabon, Mozambique and Nigeria) will need to develop and start implementing similar National Ivory Action Plans in the course of this year. Second, the Secretariat has been instructed to seek clarification from Angola, Cambodia, Japan, the Lao People's Democratic Republic, Qatar and the United Arab Emirates on how they control trade in ivory.

The illegal killing of large numbers of elephants for their ivory is increasingly involving organized crime and, in some cases, well-armed rebel militias. Unknown amounts of poached ivory are believed to be exchanged against money, weapons and ammunition to support conflicts in several African countries. Significant poaching incidents have recently occurred in Cameroon (Bouba N’Djida National Park), the Democratic Republic of the Congo (Garamba National Park) and the Central African Republic (Dzanga-Ndoki National Park). The CITES Secretariat has also informed its partners in the International Consortium on Combatting Wildlife Crime (ICCWC) of the imminent threat to elephants in the Central African Republic (Dzanga-Ndoki National Park) and requested each one to reach out and inform their various networks.

Poaching levels have increased in all African subregions, with central Africa continuing to display the highest levels of illegal killing in any subregion in Africa or Asia. Wildlife rangers who are serving in the front line are often quite literally being outgunned. Wildlife crime has become a serious threat to the security, political stability, economy, natural resources and cultural heritage of many countries. The extent of the response required to address this threat effectively is often beyond the sole remit of environmental or wildlife law enforcement agencies, or even of one country or region alone.