Timber and aquatic species, including sharks and rays, top the agenda. Elephants, rhinos, polar bears,
freshwater turtles, agarwood and many other plants and animals also under consideration.

Top anti-crime officials meet to discuss integrated strategies to halt poaching
and smuggling of most endangered animals and plants.
Use of secret ballots and financing also to be discussed.

Bangkok, 3 March 2013 – The Convention on International Trade in Endangered Species of Wild Fauna and Flora (CITES) will hold its next triennial conference in Bangkok from 3 to 14 March to decide how to improve the world’s wildlife trade regime that has been in place for 40 years. 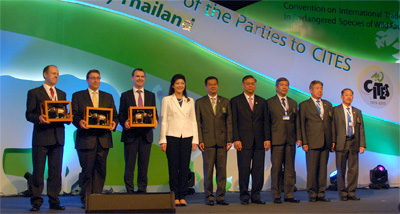 Some 2,000 delegates representing over 150 governments, indigenous peoples, non-governmental organizations and businesses are expected to attend and discuss, among other things, 70 proposals for amending the rules for specific species. Many of these proposals reflect growing international concern about the escalation of poaching and illegal trafficking of wild animals, the destruction of the world’s marine and forest resources through overfishing and excessive logging and the risks that wildlife crime represents for the security of the planet.

“2013 is the 40th anniversary of CITES and will be a crucial year for the world’s wildlife. CITES is known for taking meaningful decisions that have an impact ‘on-the-ground’. CITES is where the ‘rubber hits the road’ and the outcomes of our world wildlife conference in 2013 will be of great significance to the future of many species of plants and animals”, said John E. Scanlon, Secretary-General of the Convention.

Achim Steiner, United Nations Under-Secretary and Executive Director of the United Nations Environment Programme (UNEP), said: “CITES is as relevant today as it was four decades ago – indeed perhaps even more so. As over-explotation of the world’s critical natural resource base puts countries on an unsustainable path, ever more pressure is being exerted on species”.

“ Yet CITES, alongside many other international agreements, provides a wealth of examples where countries are seizing opportunities to pursue much more resource-efficient development pathways. The outcomes of Rio+20 and meetings such as this CITES Conference offer a focus for accelerating and scaling-up positive environmental change with significant social and economic outcomes”, he added.

The 70 proposals submitted by 55 countries from across the world seek to improve the conservation and sustainable use of marine species (including several shark species) and timber species (including over 100 rosewoods and ebonies from Madagascar), the vicuña population of Ecuador, polar bears, African elephants, white rhinos, freshwater turtles, frogs, crocodiles, ornamental and medicinal plants and many other species.

Governments will consider and accept, reject or adjust these proposals for amending the CITES Appendices at the Conference of the Parties. The world’s conference will also consider: how CITES can further enhance efforts to combat the illegal trade in elephant ivory and rhino horn –  and other species; whether CITES should request the Global Environment Facility to serve as a financial mechanism for CITES - to assist countries implement their obligations at the national level; the potential impacts of CITES measures on the livelihoods of the rural poor, who are often on the frontlines of using and managing wildlife; the use of secret ballots; and whether 3 March, the date of adoption of CITES in Washington DC in 1973, should be declared as World Wildlife Day.

Many of these proposals are submitted jointly, including by producing and consuming countries, and they reflect the growing international concern about the accelerating decline of biodiversity through the illegal or unsustainable trade of individual species.

The CITES Appendices lists species that could be at risk and whose import, export and re-export is controlled through a permit system (Appendix II) and species that are already threatened with extinction and cannot be commercially traded (Appendix I).

70 proposals to amend CITES lists on the table

Some governments propose to remove CITES regulations on certain species, underlining the dynamic nature of the lists and in some instances the success of CITES in key areas 40 years after its entry into force.

This year, the 70 proposals will be divided up as follows:

-    Transfer from Appendix I to Appendix II: 10 proposals

-    Transfer from Appendix II to Appendix I: 12 proposals

-    Inclusion into Appendix I: none

-    Deletion from Appendix I: 7 à from which 6 exctinct animal species

-    Deletion from Appendix II: 11 à from which 4 extinct animal species

-    Annotations to the Appendices: 5