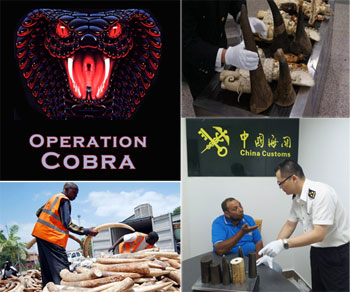 “Operations bringing police, Customs and wildlife enforcement agencies of range, transit and destination States together to combat wildlife crime are essential. Equally important, is the need for effective follow-up investigations after contraband is detected or seized and the use of specialized investigation techniques, such as controlled deliveries, to ensure that all possible leads to address the entire criminal chain are pursued. This was clearly an objective of Operation Cobra, which is very encouraging”, said Mr Scanlon.

Operation Cobra, executed between 6 January 2013 and 5 February 2013, was coordinated by law enforcement officers and representatives of African and Asian national and regional wildlife law enforcement networks, working from the operation’s coordination centre that was established in Bangkok, Thailand. The operation focussed on some key species that are subject to illegal wildlife trade such as Asian big cats, elephant, great apes, pangolin and rhino, and resulted in a large number of arrests and the seizure of hornbill, ivory, leopard, pangolin, red sander wood, rhino horn, shahtoosh, snakes, tiger, and a number of other CITES listed species and their parts and derivatives.

Operation Cobra was an excellent initiative that provided valuable exposure of the ways and means of combating wildlife crime to all of the authorities that were involved.  It also created an excellent opportunity for these authorities to establish new professional relationships with their counterparts from different agencies, countries and regions of the world.

With 177 Member States, CITES remains one of the world's most powerful tools for biodiversity conservation through the regulation of trade in wild fauna and flora. Thousands of species are internationally traded and used by people in their daily lives for food, housing, health care, ecotourism, cosmetics or fashion.

CITES was signed in Washington D.C. on 3 March 1973. The 40th anniversary of the Convention will be celebrated in March 2013 which coincides with the 16th Meeting of the Conference of the Parties to be held in Bangkok, Thailand, from 3 to 14 March 2013.
Learn more about CITES by visiting www.cites.org or connecting to: