Geneva, 11 November 2012 – CITES, the convention on international wildlife trade, welcomes the call to combat the illegal trade in wildlife made by US State Secretary Hillary Clinton at an event on ‘Wildlife Trafficking and Conservation: A Call to Action’ held in Washington, D.C. on 8 November, 2012. 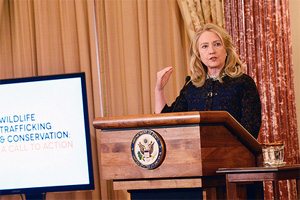 “...we now find ourselves with all of that positive effort that started 30, 40 years ago being affected by changes that we have to address at every level of the international community...over the past few years wildlife trafficking has become more organized, more lucrative, more widespread, and more dangerous than ever before...it is also a national security issue, a public health issue, and an economic security issue.” said Secretary Clinton at the event hosted by the US Department of State.

The ‘Call for Action’ includes four elements: increased diplomatic efforts, a global outreach campaign, strengthened and expanded enforcement areas, and a concerted global response. This call comes almost 40 years after the US Department of State hosted the ‘World Wildlife Conference’, which culminated in the adoption of CITES, a convention that for the first time brought international trade in wildlife under control.

“Today we are witnessing seriously escalating levels of illegal trade in elephant ivory and in rhino horn, which is pushing these species towards extinction. We welcome the leadership once again coming from the United States as we confront new threats to the survival of our wildlife” said John E. Scanlon, CITES Secretary-General.

Speaking at the event as an invited expert Scanlon said “the brave men and women who serve in the front-line in protecting wildlife are no match for the heavily armed and organized criminal groups and rebel militias involved in wildlife trafficking today. These groups do not hesitate in using violence, in corrupting local officials, or in killing rangers - and they are depriving local people of legitimate development choices. Combatting these serious crimes requires the support of the police and other enforcement personnel, as well as the military in some cases. Such support must come from a wide-range of ministries and will sometimes require the direct intervention of the highest level of government.”

Scanlon highlighted the work of the International Consortium on Combatting Wildlife Crime (ICCWC), chaired by CITES and which includes INTERPOL, the UN Office on Drugs and Crime, the World Bank and the World Customs Organization. ICCWC brings better coordinated support to national enforcement authorities and regional wildlife enforcement networks in combatting illegal wildlife trade, including through training in ‘controlled deliveries’, better use of forensics, ‘following the money’ to track criminals, and asset forfeiture to ensure they do not profit from their illegal activities.

“The magnitude of the threat requires a commensurate response from enforcement-related bodies and personnel at all levels - national, regional and global. In particular, we must use our collective efforts to help national enforcement officers deploy the same suite of tools used to combat other types of crime - and this is exactly what we are doing through ICCWC” said Scanlon.

Combatting wildlife crime will be high on the agenda of the 16th meeting of the Conference of the Parties to CITES in Bangkok, Thailand from 3-14 March, 2013. This meeting will coincide with the 40th Anniversary of the adoption of CITES in Washington, D.C., on 3 March, 1973. At this meeting, the 176 Parties to CITES will consider major enforcement decisions, including on elephants and rhinos. The Host Government, Thailand, will convene the ASEAN-Wildlife Enforcement Network, and the CITES Secretariat will convene the ICCWC partners, to consider additional measures to collectively combat wildlife crime.

Combatting illegal trade in wildlife requires adequate resources and CITES Parties will also consider whether the Global Environment Facility (GEF) should be asked to assist countries in meeting their national obligations under CITES, as well as the budget of the Convention.

“CITES is the only global convention addressing international trade in wildlife. If not for CITES such trade would be unregulated. Combatting wildlife crime requires the strengthening of CITES, which governments will consider in March next year” concluded Scanlon.

Secretary Hillary Clinton’s Remarks at the Wildlife Trafficking and Conservation: A Call to Action event: http://www.state.gov/secretary/rm/2012/11/200294.htm

For more on ICCWC: /eng/prog/iccwc.php

For the draft Agenda for CITES CoP 16: /eng/cop/index.php

For the Secretary-General’s testimony to the US Senate Foreign Relations Committee on wildlife crime: /eng/news/SG/2012/20120525_SG_US-Senate_testimony.php