Aquatic and timber species top on the agenda, including sharks and rays.
Elephants, rhinos, polar bears, vicuñas, freshwater turtles and many
other plants and animals also under discussion

Geneva, 5 October 2012 – The deadline for submitting proposals to change the lists of species protected under the Convention on International Trade in Endangered Species of Wild Fauna and Flora (CITES) ended at midnight yesterday 4 October1. The CITES Secretariat has received 67 proposals from Parties to the Convention to adjust the rules governing international trade in wildlife species. 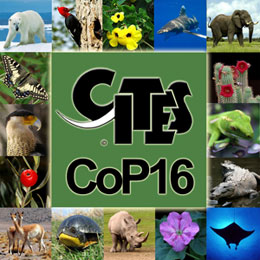 The 67 proposals2 have been submitted by electronic means by over 50 countries from across all regions of the world. Their proponents seek to improve the conservation and sustainable use of marine species (including several shark species) and timber species (including over a 100 species from Madagascar), the African elephant populations of Tanzania, the vicuña population of Ecuador, freshwater turtles, frogs, crocodiles, ornamental and medicinal plants and many other animals and plants. Proposals addressing elephants, white rhinoceros, and polar bears were also submitted.

A provisional list of amendment proposals is now available on the CITES web site. The full proposals will be posted in the language in which they were received over the coming days, together with the final list of proposals. Parties will then have 60 days to provide their comments on the proposals. The CITES Secretariat will also invite comments from intergovernmental bodies concerned with marine species. The CITES Secretariat will publish its provisional assessments of the proposals by the end of the year.

Governments will consider and accept, reject or adjust these proposals for amending the CITES Appendices at the world’s wildlife conference to be held in Bangkok, Thailand, from 3 to 14 March 2013, which will coincide with the 40th anniversary of CITES.

At the March 2013 conference, Parties will also be asked to consider: how CITES can further enhance efforts to combat the illegal trade in elephant ivory and rhino horn - as well as Asian big cats, great apes and other species; whether CITES should request the Global Environment Facility to serve as a financial mechanism for CITES - to assist countries implement their obligations at the national level; the potential impacts of CITES measures on the livelihoods of the rural poor, who are often on the frontlines of using and managing wildlife; and whether 3 March, the date of adoption of CITES in Washington DC in 1973, should be declared a UN World Wildlife Day.

“2013 is the 40th anniversary of CITES and it will be a critical year for the world’s wildlife. CITES is known for taking meaningful decisions that have an impact ‘on-the-ground’. CITES is where the ‘rubber hits the road’ and the outcomes of our world wildlife conference in 2013 will be of great significance to the future of many species of plants and animals”, said John E. Scanlon, Secretary-General of the Convention.

Many of these proposals are submitted jointly, including by producing and consuming countries, and they reflect the growing international concern about the accelerating decline of the world’s marine and forest ecosystems through overfishing and excessive logging, including through the illegal trade of individual species.

The CITES Appendices lists species that could be at risk and whose import, export and re-export is controlled through a permit system (Appendix II) and species that are already threatened with extinction and cannot be commercially traded (Appendix I).

Some governments propose to remove CITES regulations on certain species, underlining the dynamic nature of the lists and in some instances the success of the CITES regulatory processes in bringing the populations of these species back to healthy levels.

*1. Some proposals may have been posted to the Secretariat within the deadline but may not have yet been received at the date of this Media Release.

2. Contact details of national Management Authorities responsible for the preparation of the proposals are available on CITES website here.