Geneva/Nazca, 26 September 2012 – Representatives of member States of the Convention on International Trade in Endangered Species of Wild Fauna and Flora (CITES)* will meet between 26 and 28 September in Nazca, Peru, to discuss the impact of wildlife conservation measures on the livelihoods of poor rural communities. 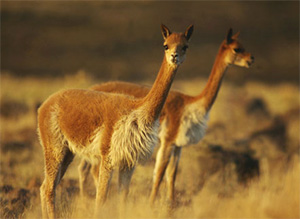 Meeting in working groups, officials from Argentina, Botswana, China, Colombia, Costa Rica, the Democratic Republic of the Congo, Indonesia, Kenya, Nicaragua, the Plurinational State of Bolivia and South Africa, together with experts from the Organization of American States and the UNEP World Conservation Monitoring Centre (UNEP-WCMC), and representatives of the Lucanas Rural Community and the World Wildlife Fund, will participate in the development and application of guidelines to enable better comprehension of the link between conservation strategies and the livelihoods of poor rural communities.

The participants will discuss and refine the assessment instruments and mitigation guidelines to protect wildlife proposed by CITES to reconcile its environmental objectives with the livelihoods of indigenous and rural communities. They will thus seek to develop a modern compass that indicates the ‘southern’ path for the conservation of biological diversity and poverty reduction to the 176 States party to CITES, their governments, and global organizations, associations and communities that are working to find sustainable options for the 21st century.

In his inaugural speech, the CITES Secretary-General, Mr John E. Scanlon, said "Legal, sustainable and traceable trade in a number of species listed in CITES could generate jobs and benefits for local indigenous and rural communities at the same time as ensuring the survival of those species in the wild. The important contribution of CITES, both for nature and for the people, has been explicitly recognized in the Rio+20 outcome document: The Future We Want. CITES puts into practice the principle of the sustainable use of biodiversity, which could produce tangible benefits for local communities and global environmental benefits for all nations."

As part of the meeting, which was financed by the European Commission, the Peruvian Ministry of Agriculture, through the Directorate General of Forestry and Wildlife, organized a visit to the Lucanas Rural Community in Ayacucho in order to demonstrate what has been achieved in the field for the conservation of the vicuña through sustainable management of that species and the successful marketing of its fibre in international markets.

According to the figures of the Directorate General of Forestry and Wildlife, the volume of vicuña fibre exported in 2011 was greater than three tons, with Italy being the main importing country, followed by Argentina, the United Kingdom and China, respectively, with 66 % of the fibre dehaired.

Regarding the export of garments, mainly shawls and scarves to Chile, the United States, Japan, Argentina and Canada, in 2001, 228 items were exported, while 56.60 m of fabric was sold to Canada, Japan, Switzerland and the United Kingdom.

The government announced that the total contribution of vicuña fibre and related products to the GDP during the previous year reached almost USD 1.82 million. The industry also created 300 direct jobs with an average monthly remuneration of PEN 1,200 (nuevos soles), and 600 indirect jobs for rural women.

There are now 10 operational dehairing centres in the regions of Cusco, Puno, Ayacucho, Huancavelica, Arequipa and Apurimac, and this figure continues to grow.

The Nazca meeting will also make it possible for representatives of other regions around the world to learn from the successful experience of the Peruvian vicuña and then replicate it for other places and species, thereby widening the virtuous circle of conservation that creates benefits for both wildlife and indigenous and rural communities.

With 176 member States, CITES remains one of the world's most powerful tools for biodiversity conservation through the regulation of trade in wild fauna and flora. Thousands of species are internationally traded and used by people in their daily lives for food, housing, health care, ecotourism, cosmetics, lotions, fibres, fashion, luxury items, etc.