Geneva, 31 July 2012 – The 62nd meeting of the Standing Committee of the Convention on International Trade in Endangered Species of Wild Fauna and Flora (CITES), adopted crucial measures to halt the escalation of ivory and rhino horn smuggling. The meeting held in Geneva last week, came one month after the Rio+20 Conference recognized the important role of CITES in its outcome document The Future We Want.

Some 300 observers, including world specialists working for governments, intergovernmental bodies, the private sector and non-governmental organizations, contributed to the deliberations. The meeting attracted a record number of 50 observer organisations and was open to the media.

“The Standing Committee has made full use of its compliance and enforcement procedures, which are a unique feature of CITES, in ensuring legal, sustainable and traceable trade. They have also recognized the need to work closely with all countries affected by the illegal supply chain of elephant ivory – range, transit and destination – if we are to tackle this problem effectively,” said CITES Secretary-General John E. Scanlon. 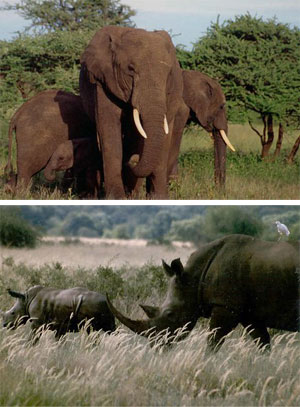 The Committee decided unanimously to take urgent measures to tackle the current poaching and smuggling crisis threatening elephant and rhino populations. The 17 Committee members requested countries and territories that are most affected by illegal ivory trade to adopt a series of immediate measures to control domestic markets and combat smuggling.

Members also decided to continue discussions on a proposal for an ivory decision-making mechanism, and requested the CITES Secretariat to lead the drafting of a proposal to be submitted at the next meeting of the Conference of the Parties to CITES (CoP16), which will take place in Bangkok in March 2013. The CITES Secretariat will invite further comments from identified stakeholders on the proposal considered at last week’s meeting and prepare a new proposal that will be released by 4 of October 2012.

The Committee analysed the drivers behind the exploding demand in rhino horn and requested Viet Nam to report by September 2012 on its actions to combat illegal trade in rhino horn. The country was encouraged to conclude, as a matter of urgency, the inventory of rhinoceros hunting trophies and verify their non-commercial use.

Among other decisions taken by the Committee, nine are total wildlife trade suspensions for lack of legislation to penalize illegal wildlife trade (the Comoros, Guinea-Bissau, Paraguay and Rwanda) or for failing to report trade in CITES-protected species (Guinea-Bissau, Nepal, Rwanda, the Solomon Islands and the Syrian Arab Republic). The States concerned will not be able to engage in international trade in close to 35,000 CITES-listed species after 1 October 2012 unless they improve their legislation and/or submit their missing reports to the CITES Secretariat by that date.

The Standing Committee also issued a warning to Guinea to take a clear set of minimum actions to improve the issuance and monitoring of CITES permits and operations and to reduce illegal wildlife trade.

The Committee examined the export levels for a wide-range of animals and plants. It recognized the good progress made in 35 cases. Amongst these was the progress made by the Democratic Republic of the Congo regarding African teak and African cherry (used to treat prostate ailments, including prostate cancer). Conservation actions to protect the species implemented with the joint support of the International Tropical Timber Organization (ITTO) and CITES, persuaded the Committee not to proceed with trade suspensions for the populations of these two species occurring in that country.

Following the receipt of a detailed scientific report and management plan from Cameroon, a long-standing trade restriction affecting exports of African grey parrots from Cameroon was lifted subject to the imposition of an annual quota of 3,000 birds.

However, the Committee also decided to recommend new trade suspensions for five species of reptiles and one tree:

The Committee also agreed trade suspensions in a further 41 cases involving 38 species with a deferred date of implementation for the suspension recommendation. The deferrals range from one month to two years depending on the complexity of the tasks to be accomplished by concerned countries. The species involved are hippopotamus from Cameroon and Mozambique, euphorbias, aloes and palm trees from Madagascar and the bigleaf mahogany from Belize, Ecuador and Nicaragua.

“CITES works closely with countries to assist them in addressing the science-related requirements of the Convention, with good progress being made in the majority of cases before the Committee. However, where insufficient progress has been demonstrated compliance measures have been taken” said CITES Secretary-General John E. Scanlon in his closing remarks.

Additionally, the Committee reviewed implementation of the Convention for captive-breeding and ranching operations and decided to closely monitor 14 operations that may warrant further examination, including farms breeding crocodiles in Colombia and bird facilities in the Solomon Islands.

The critical financial situation that faces CITES, however, does not reflect the importance of tackling wildlife serious crimes and ensuring sustainability, legality and traceability of wildlife trade.

The Secretariat announced that it will require an annual budget of close to USD 7m to maintain its current staffing levels (that are 26% lower than levels in 2000) if it is to effectively carry out its functions during the next triennium (2013-2016). This will imply an increase in the contributions made by the 175 member States.