Geneva, 25 July 2012 – The International Consortium on Combating Wildlife Crime (ICCWC) today launched its Wildlife and Forest Crime Analytic Toolkit on the occasion of the 62nd meeting of the CITES Standing Committee being held in Geneva from 23 to 27 July 2012. ICCWC also announced that it has secured USD 600,000 for the current fiscal year to strengthen national enforcement capacities to fight wildlife crime through the World Bank Development Grant Facility (DGF). 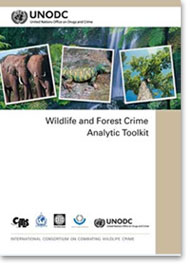 Every day, wild plants and animals are being illegally logged, harvested or hunted in the richest biodiversity areas of the planet to satisfy lucrative illegal domestic and international markets, often controlled by criminal syndicates. Trafficking, supplying, possessing and consuming wild fauna and flora obtained in contravention of national and international laws are happening at a scale that poses an immediate risk to species and ecosystems as well as to the people who rely upon them for their livelihoods. The economic, social and environmental impacts of illicit trafficking in wildlife were also recognized in the Rio+20 outcome document The Future We Want agreed by the more than 100 Heads of States on 22 June 2012.

Yet wildlife crime remains poorly studied in comparison to other areas of illicit trade, such as the illicit trade in drugs, which is the subject of World Drug Report by the United Nations Office on Drugs and Crime (UNODC). The ICCWC has not tried to place a value on the scale of illegal wildlife trade, but it notes that others have realistically estimated it at anything between 16 and 27 billion US dollars a year, including timber and marine species. Some of the most lucrative illegal wildlife commodities include tiger parts, elephant ivory, rhino horn, and exotic birds and reptiles. A recent World Bank study Justice for Forests reports that illegal trade in timber deprives States of over USD 10 billion in annual revenue.

In collaboration with its ICCWC partners, UNODC commissioned the development of the analytical toolkit launched today. The use of the Toolkit will provide government officials, Customs, police and other relevant enforcement agencies with a framework to analyse, prevent, detect and combat wildlife and forest offences.

The Toolkit will be tested in partnership with selected national governments. The DGF funds secured through the World Bank, one of the ICCWC partners, will significantly contribute to this process. The World Bank provides DGF resources in an annual process out of the net income derived from its international lending operations to support innovation in development strategies and approaches. This year, the Bank’s Board of Executive Directors approved grants totalling $ 56.2 million, including the grant to ICCWC. The DGF program is planned to be implemented over three years, with additional funding to be requested from the DGF for the coming two years.

Commenting on the launching of the Toolkit, CITES Secretary-General Mr John E. Scanlon said: "We are scaling up our collective enforcement effort in recognition of the serious risks that wildlife crime poses to people and to nature. In particular, we are providing a more formidable and better coordinated enforcement response at the global level and offering enhanced support to regional and national enforcement bodies. We are making better use of modern enforcement techniques and technologies, attracting additional financial and human resources, and striving to suppress more effectively the demand that is driving illegal trade.”

"Wildlife crime and trafficking in timber are two major illicit enterprises for organized crime groups. These activities cause irreparable damage to our forests and place endangered species at further risk of extinction. They also fuel widespread corruption, money laundering, fraud and violence, and impact on sustainable livelihoods. I am sure that this toolkit will be invaluable as we work alongside our partners in the ICCWC, to boost law enforcement training, strengthen the judiciary and prosecution, and promote international cooperation", said Executive Director of the UN Office on Drugs and Crime, Yury Fedotov.

The World Bank’s Vice President for Sustainable Development Rachel Kyte said: “As the world's largest donor to environment and natural resource law enforcement, we welcome the ICCWC Toolkit. The toolkit provides new and innovative ideas to countries to enable them to better combat environmental crime. The World Bank is providing $300 million to developing countries for projects ranging from wildlife crime prevention through to deployment of anti-money laundering regimes and beyond."

The Secretary General of the World Customs Organization, Kunio Mikuriya, said: “The global Customs community is committed to working in a collaborative and coordinated manner with its ICCWC partners to stop criminals trading in environment-sensitive goods, including wildlife which remains under sustained attack in many areas of the world. This new toolkit joins the ‘arsenal of weapons’ already developed by both the WCO and other international organizations to build the capacity and enhance the ability of Customs and law enforcement officials to effectively fight cross-border environment crime.”

BACKGROUND ON WILDLIFE AND FOREST CRIME

The Wildlife and Forest Crime Analytic Toolkit presents a collection of tools and resources that its users can choose to analyse wildlife and forest legislation, law enforcement measures, prosecutorial and judicial capacities, factors that drive wildlife and forest offences, and the effectiveness of preventive interventions at the national level. The Toolkit will also enable countries to collect and analyse available data, gather evidence, prepare and preserve the wildlife and forest crime scene and identify suspects.

It also recognizes the need for a more systematic and thorough global analysis of the illicit trade in wildlife and it will help countries understand the various factors that drive wildlife and forest offences. This will facilitate the integration of information and experience gained from such analysis into national, regional and international strategies.

ICCWC was created in late 2010 when five international organizations joined forces in a collaborative effort to bring coordinated support to the national wildlife law enforcement agencies and to the subregional and regional networks that, on a daily basis, act in defence of natural resources.

Given the nature and scale of the risk posed to biodiversity by illegal trade in wildlife, it is now acknowledged that a more organized and sophisticated response needs to be taken by the law enforcement community to tackling the problem. ICCWC seeks to ensure that perpetrators of serious wildlife crimes will face a more formidable and coordinated response, departing from the present situation where the risk of detection and punishment is all too low. It also seeks to deploy modern techniques and technologies that are applied in different areas to tackling wildlife crime, such as controlled deliveries and the use of wildlife forensics. It aims to address international cooperation, money laundering and corruption. Each ICCWC partner organization brings its own particular strengths to the Consortium.