Geneva, 21 June 2012 – Elephant poaching levels are the worst in a decade and recorded ivory seizures are at their highest levels since 1989, according to a report published today by the Convention on International Trade in Endangered Species of Wild Fauna and Flora (CITES). The findings, largely based on information submitted by governments, will be presented and discussed at the 62nd meeting of the CITES Standing Committee to be held in Geneva from 23 to 27 July 2012. 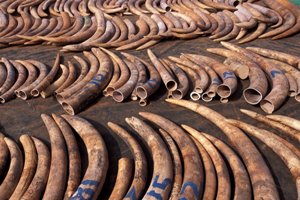 The report analyses data from the CITES programme on Monitoring the Illegal Killing of Elephants (MIKE), IUCN’s data on the status of elephant populations, the Elephant Trade Information System (ETIS) managed by TRAFFIC, and the CITES trade database managed by the UNEP World Conservation Monitoring Centre (UNEP-WCMC).

These authoritative sources of information have shown a very close correspondence between trends in elephant poaching and trends in large-scale ivory seizures, detecting essentially the same patterns at different points in the illegal ivory trade chain.

Commenting on the report, the CITES Secretary-General, Mr John E. Scanlon, said: “We need to enhance our collective efforts across range, transit and consumer states to reverse the current disturbing trends in elephant poaching and ivory smuggling. While being essential, enforcement efforts to stop wildlife crime must not just result in seizures – they must result in prosecutions, convictions and strong penalties to stop the flow of contraband. The whole ‘enforcement chain’ must work together.”

According to ETIS data, three of the five years in which the greatest volumes of ivory were seized globally occurred in 2009, 2010 and 2011.

In 2011 alone, there were 14 large-scale ivory seizures—a double-digit figure for the first time in 23 years, when ETIS records were first compiled. They totalled an estimated 24.3 tonnes of ivory; more than in any previous year.
Large-scale ivory seizures (those involving >800 kg of ivory in a single transaction), typically indicate the participation of organised crime.

Some African and Asian countries have made significant efforts to enhance enforcement. For example, China conducted earlier this year a major operation which resulted in the seizure of 1,366.3 kg of ivory and the arrest of 13 suspects.

Most of the ivory smuggling containers leave the African continent through Indian Ocean seaports in East African countries, primarily Kenya and the United Republic of Tanzania.

“Evidence is steadily mounting which shows that African elephants are facing their most serious crisis since international commercial trade in ivory was generally prohibited under CITES in 1989”, said Tom Milliken, TRAFFIC’s Elephant and Rhino Programme Leader and the Director of ETIS.

These findings are matched by data on poaching levels in Africa from the CITES MIKE programme. MIKE has documented a steady increase in levels of elephant poaching across the continent since 2005, with the levels in 2011 being the highest since monitoring began in 2002. Poaching levels are increasing in all countries where African elephants occur, and may be leading to dramatic declines in some populations, but particularly in Central African countries, where poaching levels are highest. This was brought to international attention earlier this year by the killing of hundreds of elephants in Bouba Ndjida National Park in Cameroon.

“The MIKE analysis shows poaching to be highest where human livelihoods are most insecure and where governance and law enforcement are weakest. It also suggests that poaching is driven by demand for ivory in East Asia. The number of African elephants poached in 2011 alone could well run into the tens of thousands,” said Julian Blanc, who coordinates the MIKE programme.

Information collected by IUCN corroborates the MIKE findings that poaching is an immediate danger to elephant populations across the continent. There are disturbing indications that the illegal killing of elephants has increased in recent years in Asia too, although data are hard to obtain.

“There is a pressing need for governments and other stakeholders involved with wildlife conservation to properly assess the amount of Asian elephant ivory that is entering trade”, said Simon Hedges, Co-chair of the IUCN Species Survival Commission’s Asian Elephant Specialist Group.

An additional pressure on Asian elephants, also apparently increasing, is the illegal international commercial trade in live wild elephants for the circus trade in China and the tourist trade in Thailand.

The critical situation in Africa demonstrates the urgent need to implement the African Elephant Action Plan, which was created by all African elephant range States under the auspices of CITES in 2010. The plan envisages investing USD 100 million over three years into elephant conservation efforts, and an African Elephant Fund was launched in August 2011 at the 61st meeting of the CITES Standing Committee.

“Having sustainable elephant populations in Africa will require a shared vision and a highly strategic and collaborative investment of time and resources along the entire ivory supply chain. Without this we will all lose what we cherish the most – the icons of Africa – our elephants,” said Holly Dublin, Chair of the IUCN/SSC African Elephant Specialist Group, at a recent African elephant range States meeting.

At the international level, creative and innovative responses to this crisis are required. The use of modern traceability systems, including DNA forensics in cases of wildlife trafficking has already proven to be very effective. DNA evidence has been used successfully in a number of rhinoceros-related cases in South Africa and it is routinely forming a part of numerous criminal investigations. In any case, enforcement efforts to stop wildlife crime must be coordinated. This is why the work of the recently-established International Consortium to Combat Wildlife Crime (ICCWC) is essential to support and coordinate enforcement actions across international borders.

The most recent continent-wide compilation of African elephant (Loxodonta africana) numbers dates back to 2007, when there were at least half a million elephants in Africa, and perhaps as many as 700,000, spread over some 3.3 million km², an area slightly larger than India. New survey data on African elephant populations are currently being analysed by the IUCN/SSC African Elephant Specialist Group and entered into the new African and Asian Elephant Database (http://elephantdatabase.org), and an update on elephant numbers is expected later this year.

Listed in Appendix I of CITES and categorized as ‘endangered’ on the IUCN Red List of Threatened Species™, the global Asian elephant population is estimated at around 30,000–50,000, with a geographical range of around 878,600 km² (an area smaller than Pakistan), which is only 10% of the historical range

Background on the ivory trade

The international trade in elephant ivory was banned by the Conference of the Parties to CITES in 1989. The CITES Parties have twice relaxed the ban since, first in 1999 to allow a “one-off” sale of ivory from Botswana, Namibia and Zimbabwe to Japan, and again in 2008 to allow further one-off sales from those three countries, plus South Africa, to China and Japan.

As a precondition for the second sale to go ahead, two monitoring systems – ETIS and MIKE – were established to monitor trends in levels of illegal trade in ivory and of illegal killing of elephants respectively. CITES also recognized the role of the IUCN Elephant Specialist Groups, which monitor the status of elephant populations, and UNEP-WCMC, which monitors the legal trade in ivory. Together, these four systems deliver consistent, evidence-based information to assist in CITES decision-making.

The CITES Programme for Monitoring the Illegal Killing of Elephants (CITES-MIKE) has been monitoring trends in elephant poaching in some 60 sites in Africa and 27 sites in Asia since 2002. These sites include many of the largest elephant populations on both continents. The operation of the MIKE programme in Africa between 2007 and 2012 was made possible thanks to the support of the European Union.

TRAFFIC, a strategic alliance between WWF and IUCN, the International Union for the Conservation of Nature, is the world’s leading wildlife trade monitoring organization.  TRAFFIC tracks illegal trade in elephant ivory using records of ivory seizures that have occurred anywhere in the world since 1989.  The Elephant Trade Information System (ETIS), one of the two monitoring systems for elephants under CITES, is managed by TRAFFIC and currently comprises over 18,000 elephant product seizure records from some 90 countries, the largest such collection of data in the world.  TRAFFIC will be conducting a comprehensive analysis of these data later this year for the 16th meeting of the Conference of the Parties to CITES.

IUCN, the International Union for Conservation of Nature, helps the world find pragmatic solutions to our most pressing environment and development challenges by supporting scientific research; managing field projects all over the world; and bringing governments, NGOs, the UN, international conventions and companies together to develop policy, laws and best practice.

The world's oldest and largest global environmental network, IUCN is a democratic membership union with more than 1,000 government and NGO member organizations, and almost 11,000 volunteer scientists and experts in some 160 countries. IUCN's work is supported by over 1,000 professional staff in 60 offices and hundreds of partners in public, NGO and private sectors around the world. IUCN's headquarters are located in Gland, near Geneva, in Switzerland.  www.iucn.org

The Species Survival Commission (SSC) is the largest of IUCN’s six volunteer commissions with a global membership of around 7500 experts.  SSC advises IUCN and its members on the wide range of technical and scientific aspects of species conservation, and is dedicated to securing a future for biodiversity.  SSC has significant input into the international agreements dealing with biodiversity conservation.

The UNEP World Conservation Monitoring Centre (UNEP-WCMC) is a collaboration between the United Nations Environment Programme, the world's foremost intergovernmental environmental organization, and WCMC, a UK-based charity. UNEP-WCMC is UNEP’s specialist biodiversity assessment arm, and the Centre for UNEP’s collaboration with WCMC.

The Centre’s goal is to provide authoritative, relevant and timely information for countries, MEAs, organizations and companies to use in the development and implementation of their policies and decisions. To help achieve this we aim to be an internationally recognized Centre of Excellence and the partner of choice for the expert synthesis, analysis and dissemination of knowledge about global biodiversity and ecosystem services.

In recognition of the nature and scale of the illegal trade in wildlife, and the pressing need for a more organized and sophisticated response to the problem by the law enforcement community, five international organizations joined forces in late 2010 to create the International Consortium on Combating Wildlife Crime (ICCWC).

ICCWC comprises the CITES Secretariat, INTERPOL, the United Nations Office on Drugs and Crime (UNODC), the World Bank and the World Customs Organization (WCO). The CITES Secretariat chairs the Consortium. ICCWC exists to support those officers serving in the front line in carrying out their essential duties – and in doing so to work with regional wildlife enforcement networks.

ICCWC seeks to ensure that perpetrators of serious wildlife crimes will face a more formidable and coordinated response, as distinguished from the present situation where the risk of detection and punishment is all too low. It also seeks to deploy modern techniques and technologies that are applied in different areas to tackling wildlife crime, such as controlled deliveries and the use of wildlife forensics. It also seeks to ‘follow the money’ and address asset forfeiture and corruption.