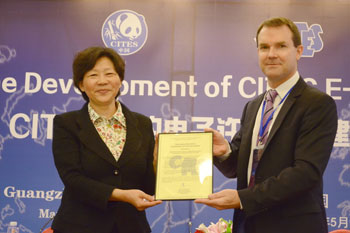 Geneva/Guangzhou, 9 May 2012 – The Secretary-General of the Convention on International Trade in Endangered Species of Wild Fauna and Flora (CITES), Mr John E. Scanlon, has today awarded a Certificate of Commendation to the National Inter-Agency CITES Enforcement Collaboration Group (NICECG) of China in recognition of two nationwide wildlife law enforcement operations carried out earlier this year. Over 100,000 enforcement officers were mobilised in this effective offensive against wildlife crime.

During the Customs Authorities Operation, organized by the General Administration of Customs, 13 suspects were arrested; 1,366.3 kg of ivory, 337,400 kg of red sandal wood; and approximately 30,000 kg of yew timber and 876 horns of saiga antelope were seized.

These two major operations were carried out under the auspices of NICECG, which was established in December 2011 in order to facilitate the collection and exchange of intelligence, enhance capacity building, and coordinate joint enforcement activities. NICECG comprises the State Forestry Administration, the Ministry of Public Security, the General Administration of Customs, the Ministry of Agriculture and the Administration of Industry and Commerce. The CITES Management Authority of China, hosted by the State Forestry Administration, is the coordinating body of NICECG.

The CITES Secretary-General, Mr John E Scanlon, presented the Certficate of Commendation to the Chair of NICECG and Vice Minister of the State Forestry Administration, Ms Yin Hong, at the opening ceremony of a meeting hosted by China on the Development of CITES E-Permitting Systems, which is being held in Guangzhou and attended by participants from 14 CITES member States. Mr Scanlon declared: “The sheer scale, extent of coordination, and level of success of these intelligence-driven operations exemplify the coordinated enforcement effort that is required at the national and sub-national levels to combat wildlife crime successfully. We commend the Chinese Government for this excellent initiative, which echoes the coordinated enforcement approach that we are promoting through the International Consortium on Combatting Wildlife Crime (ICCWC).”

At the acceptance of the Certificate of Commendation, Ms Yin Hong, stated: “The Government of China attaches great importance to the protection of the ecological system, and has always given high priority to the protection of biological diversity and wildlife law enforcement. China is committed to work with the international community to enhance the implementation and enforcement of CITES.”

Although China has been conducting nationwide wildlife enforcement actions for many years, the new operations coordinated by NICECG, have clearly given new impetus to CITES implementation. NICECG is also serving as a model at the provincial level, with five CITES enforcement inter-agency groups being set up.

Dr Meng Xianlin, Executive Director-General of the CITES Management Authority of China, said: “We see the Certificate of Commendation from the CITES Secretary-General as a very positive recognition of the law enforcement efforts made by China in the implementation of CITES, one for which we are extremely grateful. This is an invaluable encouragement to all the wildlife law enforcement officers across China. NICECG will spare no efforts to bring its power into full play in order to gather concerted efforts of all relevant authorities in combating illegal activities in wildlife and to curb illegal wildlife trade effectively. ”

CITES implementation has also recently been brought to the fore at the highest political level. In the joint statement issued after the fourth round of the U.S.-China Strategic and Economic Dialogue held from 3 to 4 May in Beijing, article 47 states that: “We decide to jointly support the wildlife law enforcement efforts and to combat the smuggling of endangered and protected species. China and the United States will attend the Special Investigation Group Meeting held from 20 to 21 June 2012 in Nanning, China, led by ASEAN-WEN. At the meeting, wildlife investigators and forensic experts will identify and recommend improved enforcement and inspection efforts.”